One of my most vivid memories of first year at RRMC was the Wing Wrestling Tournament.  The tournament included cadets of all years (1st through 3rd at the time).  Each flight had to submit the names of its entries in each weight class.  I would normally have been in the lightest weight class since I was probably no more than 128 pounds soaking wet at the time.  However, Lasalle Flight already had Will Wawrychuk in my weight class and it was probably correctly assumed that he had a better chance of winning than I did (and he did in fact go on to win his weight class).  Since I was likely going to lose anyway, it was decided to enter me in the next higher weight class (around 140 pounds or so, I think) where apparently we didn’t have any other candidates (which in hindsight seems hard to believe).  I think there may have been a point system to score each Squadron or Flight result and this may have been why it was worth taking a chance that I might get us some points if I won anything.

I didn’t have any wrestling experience prior to RRMC, other than with my brother while growing up, so I (and everyone else) had few expectations of my success, whereas there were a number of noted wrestlers in our class with lots of high-school wrestling experience – some even rumored to be Provincial champions.  Fortunately, it seems that none of my initial opponents were that good either.  To my surprise, I managed to win my elimination round matches (I think there were 3 or 4 matches) to get to the Wing finals.

While the elimination matches were held with little fanfare (several going on at the same time), and with no real audience, the finals were held in front of the entire Wing, including the Commandant.  During the elimination round, I had consistently used the same (lack of) technique.  I would invariably end up almost on my back for most of the match, bridging most of the time, and then (despite my complete lack of proper wrestling technique) somehow manage to flip over onto my opponent and just collapse all my weight onto his chest for the pin.

However, in the final match, for the first time I was up against a formidable opponent – Kevin Biggar — who was a very experienced wrestler.  Shortly into the match, I had Kevin just where I wanted him, on top of me with my back exposed to the mat, just waiting for my opportunity to flip on top and fall on him for the win.  However, although I hadn’t been pinned (yet), the referee, oblivious to my strategy, called the match and so I lost, this time in front of the whole Wing, and in pretty ignominious fashion.

Although initially dejected, as evident in the photo of the second place finishers, I felt lucky to have gotten as far as I did.  Nevertheless, my CFL, Gary Young, and the other seniors of my Lasalle Flight seemed very pleased with my accomplishments in the tournament (which was a refreshing change from their previous general attitude toward me) and pronounced me “Mad Dog” Pickett, after the famous wrestler Mad Dog Vachon.  So that kind of became my nickname — at least among some members of my flight anyway.  Considering the possible alternatives, I thought it was a pretty cool nickname. 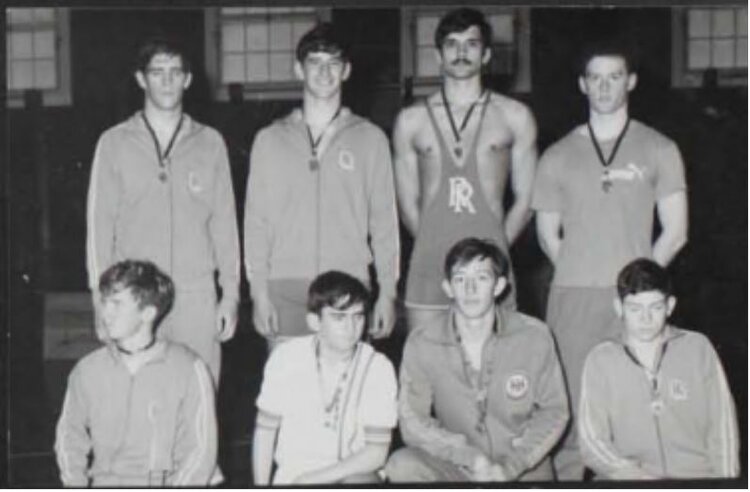