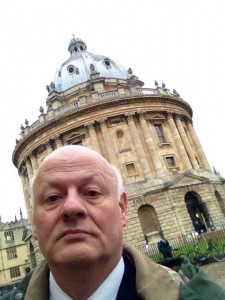 Professor Randall Wakelam recently signed a contract with the prestigious academic press, Palgrave MacMillan, to publish his book-in-progress, Western Military Education: Philosophies, Cultures and Organizations of Learning from 1700 to the Present. It will be part of the Palgrave series “Historical Studies in Education”.

Here is how it happened. In 2014 during his sabbatical year—a time of concentrated research, writing and communication in the academic world—Dr. Wakelam, Associate Professor in the History Department and Associate Chair of War Studies, was awarded a Visiting Research Fellowship in the esteemed “Changing Character of War Programme” at Oxford University, England. Within this multidisciplinary programme his focus was military education. In those historic British libraries (and along the green paths trod by Tolkien and C. S. Lewis) he read and thought about the long and complex international history of military education. As part of his scholarly activity he presented a paper titled “Militaries as Learning Organizations” at the International Standing Conference of the History of Education in London in July.

Then in September he received an email from the education editor at Palgrave MacMillan in New York. She had not been able to attend the conference but was intrigued by his abstract, which posited some broad trends in military education in the West since 1700. Would he be interested in developing a book-length manuscript? The answer, after some reflection, was yes, and following a peer review of his writing plan he signed the agreement to produce a volume over the next three years.

Above, I wrote “Here is how is happened”, but of course these things never “just” happen. They are a culmination of years of letting the spirit of inquiry fuel hard work and discipline. They are the result of papers researched and presented, ideas shared with colleagues and painstakingly edited for publication, grant proposals written and honed, courses developed and taught. Dr. Wakelam holds degrees in Commerce and War Studies (RMC, 1975, 1998), and History (Wilfred Laurier 2006). After graduating from the Royal Military College in 1975 he flew helicopters for the army, serving in three different squadrons before commanding 408 Squadron in Edmonton from 1991 to 1993. He retired as a colonel in 2009 after a long and rewarding career split between tactical aviation and teaching at the Canadian Forces College in Toronto. While working in Toronto, he became intrigued by concepts of military education, a research theme that he followed by coming to RMCC as a civilian academic after retirement.

Dr Wakelam is a Faculty Associate at the Laurier Centre for Military Strategic and Disarmament Studies, a Fellow at the Queen’s Centre for International and Defence Policy and serves on a number of editorial boards. Other books by Dr. Wakelam are Cold War Fighters: Canadian Aircraft Procurement, 1945-54 (Vancouver: UBC Press, 2011) and The Science of Bombing: Operational Research in RAF Bomber Command, 1941-1945 (Toronto: University of Toronto Press, 2009). Dr. Wakelam’s rich history of publishing with military education in mind is evident in that he is a member of the Editorial Boards of The Canadian Air Force Journal, Canadian Military History, and Canadian Military Journal. Part of the forthcoming book has been worked through in a forthcoming article titled “Education and the General,” in The New Strategist.

Dr. Wakelam engages in all the significant activities of the committed academic—he reviews and referees other publications, he gives interviews in his field, he supervises theses, and he puts real heart into teaching his students. He has even been interviewed by Rex Murphy on Cross Country Checkup.

Palgrave MacMillan has a global reach and a tradition of over 170 years of academic publishing. Dr. Wakelam deserves our congratulations and our thanks for his outstanding work. As unique as this personal journey sounds, one may look in any department at RMCC to find similarly rich experience and success. This is the kind of research that brings international academic recognition to our institution.