Kiss n tell – The picture says it all. 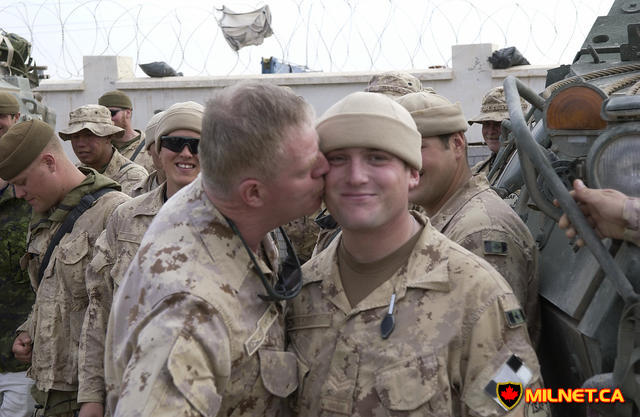 Close to Christmas time last year, the CDS paid a visit to the 1 RCR Wives Club. There were other wives clubs invited too, but it was held in the 1 RCR Drill Hall.

My wife, who was at the time my fiance, attended this visit.

When the visit was just about over, the General was meeting some of the wives, shaking hands, taking photos, that kind of stuff. My future wife had the opportunity to meet “Old Uncle Rick,” and he had some questions for her.

Assuming I was married to a soldier, he asked ‘What unit is your husband in?’

Really! I’ll be spending Christmas with Charles company! Do you have a message for him I can deliver?’ asked the General.

‘Oh, yes, just tell him I said hello and that I miss him.’ She said.

General Hillier had a better idea. ‘Here, give me a little peck on the cheek.’

Being an excellent follower of orders, leaned in and gave the CDS a little peck on the cheek.

‘I’ll deliver that to him myself.’ he told her.

She blushed and said ‘thank you’ and moved on to let others meet the CDS.

Fast forward to 24 Dec 06, Patrol Base Wilson… Charles Company rolled in to PBW, and the CDS met us there. While we’re standing around, munching on American MRE’s, my Sergeant Major seeks me out.

‘I want you standing in the front friggin’ row when the General comes around!’ He barked at me.

‘Yes sir!’ I replied, as I too, am an excellent follower of orders. So, there I am, front row, watching the CDS come around shaking hands and talking to the troops. When he gets to me he shakes my hand, then he sees my name tag.

‘Master-Corporal Leblanc! I’ve been looking for you! I have something to deliver … just look into that camera.’

Again, being a good follower of orders, I look into the Dutch combat camera man’s digital camera.

‘What could be going on?’ I wonder. ‘Do they give out medals in theater like this? Am I getting a medal? I don’t remember doing anything heroic, whats going on?’

General Hillier, still gripping my hand leans in, and plants his lips on my cheek, and the camera man wasted no time snapping that photo!

Well, I think I turned a shade of red that no living human being has turned before.

Still gripping my hand, the General asked ‘Did I embarrass you, Master-Corporal?’

‘Maybe a little, sir.’ My ears felt like they were on fire at this point. So, with the whole company shedding tears of laughter behind me, he gave me a CDS coin and said ‘The kiss was from your fiancee, Melissa, but the coin is from me, keep up the good work and get home safely to that lovely young lady.’

‘Yessir! Thank you, Sir!’ and he went on with meeting the rest of the troops.

So, that is the story of my CDS coin, and the story behind this photo……….