“I encourage you all as we chase perfection to try to catch excellence. It is the only way to go.” This past Wednesday during the weekly CWC parade, a handful of RMC’s most experienced members, in the Training and Cadet Wings alike, were recognized by cadets and other military spectators. Awards presented included the General Campaign Star, rotation bars, the Operational Service Medal, the CF Decoration, and many other notable honours.

The General Campaign Star (GCS) is awarded to CF members deployed to operations in the presence of an armed enemy. This award was presented to Chief Petty Officer 2nd Class Chris Hall. CPO2 Hall was also presented the Operational Service Medal for hi service in Haiti. NCdt Stephen Lays and NCdt Gregory Hutchings were also presented the OSM by the Commandant.

In a unique presentation, two exchange cadets from the United States Military Academy at West Point, Cadets Craig Cowell and Tyler Federwisch, took their Oath of Affirmation. The Oath affirms the commitment of 2nd year USMA Cadet’s commitment to completing their next two years of study and a minimum of five years of military service after graduation. Cmdt Tremblay led the delivery of the Oath, and presented the Cadets with their Commemorative Coins, a symbol of USMA Cadets’ goal which they seek to attain over the coming years.

NCdt Adam Reece was then presented with the HMCS Ontario Commander’s Commendation for his outstanding leadership in the Royal Canadian Sea Cadet Program. Cmdt Tremblay then presented the final award of the day, the Commandant’s Coin, to OCdt David Neppel for excellent organization and leadership during the 2011 RMC Ironman.

Congratulations to all award recipients for reflecting the excellence in service and leadership RMC prides itself on. 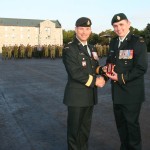 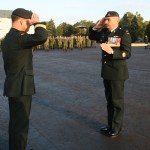 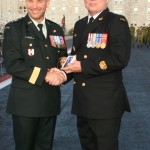 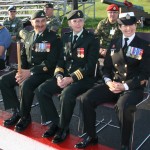 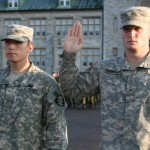 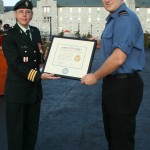 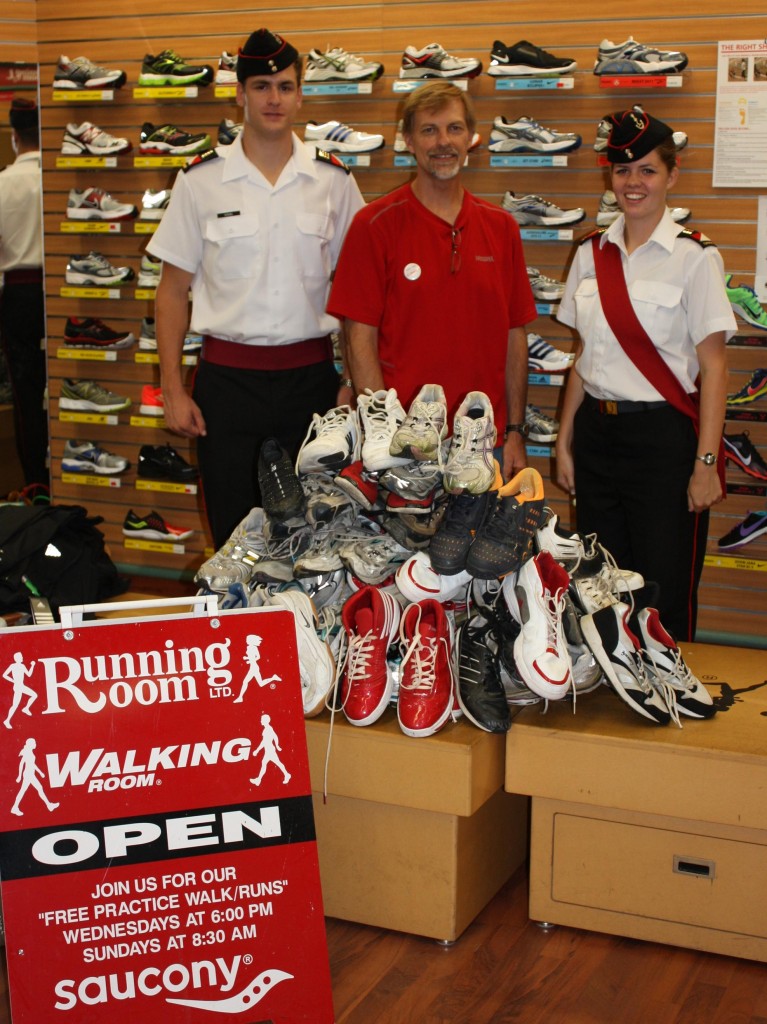 RMCC Athletic Shoes All Over Town

As part of a community outreach initiative, RMC staff and cadets were asked to donate gently used athletic shoes during the annual Sports Day which were then delivered to the Running Room store on September 22nd. The timing was perfect as the Running Room is in the midst of a running program in partnership with QECVI high school in order to foster athletic activity for young teenagers.

The 40 pairs of shoes will be donated to students from QECVI in need and remaining shoes will be distributed to various church and charity groups including the Boys and Girls Club of Kingston. It is with great pride that the CWSRO, OCdt Andrew Steel (9 SQN) and DCWSRO, OCdt Rebecca Fielding (13 SQN) presented 40 pairs of shoes, on behalf of RMCC, to Bill Sheppard, Manager of the Kingston Running Room. 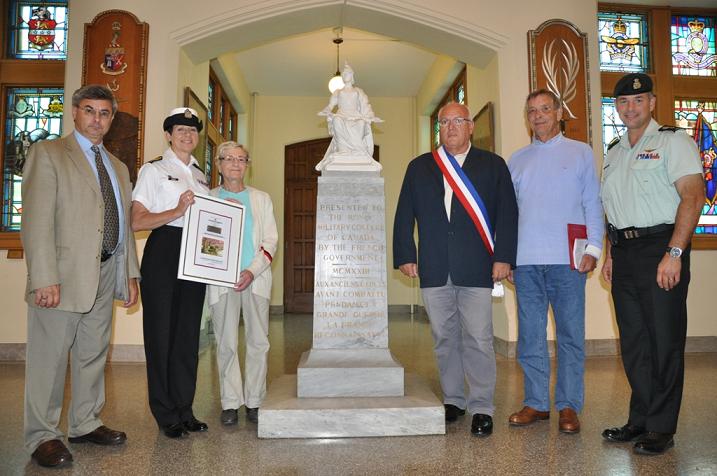 The group Les Amis du Canada, from Saint-Contest, France, visited the Royal Military College of Canada on Thursday, September 22 to present the College with a number of gifts.

Framed alongside is earth from Normandy, where many brave Canadian soldiers fell in combat.

The group also presented the College with a number of historic journals from France that tell the stories of Canadian soldiers who fought in France during the World Wars. The journals are from the years 1915, 1916 and 1944.

The group, officially known as the “Association d’amitié franco-canadienne” was formed in 1977 and has 90 members.

The village of Saint-Contest, which is 6 kilometres north west of Caen in Normandy, was liberated by Canadian soldiers in 1944. 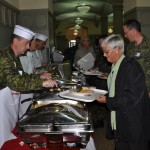 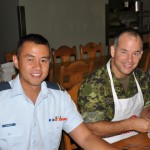 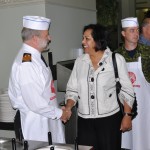 It was a musical kick off to the Royal Military College of Canada’s United Way Campaign on Tuesday, September 20th.

About 150 people came to the Cadet Dining Hall for the United Way Kick-Off Breakfast for a great meal of pancakes and waffles and some entertainment. A total of $ 760 was raised.

The morning began with the RMCC Brass and Reeds, and continued with the musical guitar styling and singing of the band Fusion.

Many of RMCC’s senior staff were on hand to enjoy the breakfast and to act as servers, including the Commandant, the College Chief Warrant Officer, the Chief of Staff, the Director of Cadets and the Training Wing Sergeant Major to name a few. Kudos to the kitchen staff for delivering a wonderful breakfast!

RMCC traditionally does very well in the fundraising department for the United Way Kingston, Frontenac, Lennox and Addington. The money raised goes to help people in the Kingston and area community. For many at RMCC, it’s a way to give back to the community that has been so welcoming and supportive over the years.

The RMC goal for this year is to raise $80,000. Stay tuned! There will be many more United Way fundraising opportunities in the weeks to come.