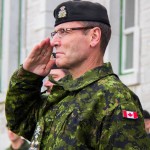 The Commander of the Canadian Army, Lieutenant-General J.M.M. Hainse visited RMCC and the main item on his agenda was to spend some time with the ALOY students in a formal and informal setting.

ALOY started at RMCC in 2008 to expose aboriginal students to military life while also helping develop their leadership skills and starting them in university-level courses. Field trips, sports and activities that develop their cultural awareness also play a major role in the program. Tuition and books are free.

Should they choose to not continue with the military, they go back to their own communities as potential leaders.

The visit was far from low-key. The signing of the guest book took place at the foot of the Memorial Staircase in Mackenzie Building. A quarter-guard comprised of ROTP / RETP cadets was well turned out and part of the welcoming ceremonies.

General Hainse who has a well earned reputation and a history for being deeply interested in this program and the ALOY students made a point of mixing and talking with a great number of the ALOY cadets.

A visit of this type at this level reinforces the commitment and the importance that the Canadian Armed Forces places with the ALOY program. 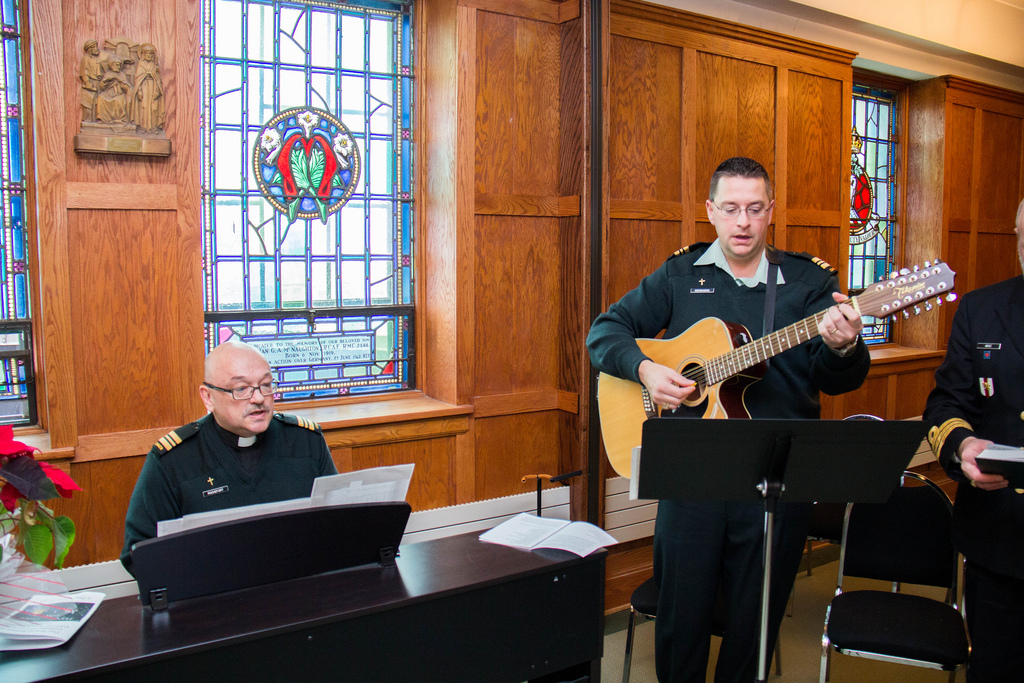 Last Friday, December 6 – the 50th Anniversary of the Chapels St Raphael and St Martin was held at RMCC. Lessons and Carols service were held.

A large turnout of college staff (military & civilian) with a good collection of cadets who were at the half way point of their First Term exams attended the hour long ceremony which was followed by a light stand-up lunch.

RMCC Fencing in Belgium: An Opportunity, A Victory, An Experience

Perspective from the team captain:

The team was lucky to have the opportunity to visit several battlefields across the country such as Ypres and Passchendaele between their arrival and the beginning of the two-day competition. This visit was an excellent chance for the team to see an important part of Canadian history first hand, an opportunity that most people do not get the chance to experience.

Following a long day of traveling and touring the team was fortunate to have the time to rest and train at RMA’s facilities in order to prepare for the difficult challenge ahead of them. At the onset of the first day of fencing the team was anxious, but well prepared to take on whatever was to come.

After a long day of individual competition RMCC cadets performed incredibly well with top results including NCdt Graham Austin placing 10th in the men’s event and OCdt Deanna Gilmore placing 5th in the women’s event. The following day the men’s and women’s teams got back on the piste to fight in the team event. Excellent teamwork and dedication allowed for amazing results in this event. The women’s team taking silver and the men’s taking gold after some very hard matches in both. Thanks to an impressive effort by everyone involved RMCC was able to take a victory for Canada at an international competition, a feat that these athletes can be proud of for the rest of their lives.

The team would like to thank the RMC Foundation for the enormous amount of support that they provided. Without them, this incredible experience would not have been possible.

International Military Fencing at RMA: Before the salute of swords

Perspective from the Coach…

We landed with the usual excitement of arriving in a new and foreign place. Our Canadian delegation of ten, on little sleep, did the scramble to get off the plane, pressed through Customs, hoped the luggage arrived (which not all did) and surged to Arrivals in search of a Belgian military rep to meet us. They were there, we were late, having done the sprint through Munich to make our connection and luckily the plane had taken off almost 45 minutes behind schedule or we wouldn’t have made it. However long they had had to wait, the Belgians didn’t show any impatience. Our Belgian Cadet Liaison Officers amicably greeted us in both French and English and were genuinely excited to meet our foreign delegation. And so the adventure began.

We were promptly escorted to our military transport which consisted of two large 8 passenger vans. Thankfully it was space enough for our group of ten and numerous large fencing bags, suitcases and Scarlets. Fighting sleep we were driven from the airport, on the northern outskirts of Brussels, into the city and then onward into the countryside again. Although we were there in Belgium for an international military Cadet fencing tournament, the first event on our itinerary was an afternoon visit to Passchendaele and Yper (Ieper). Team members took turns trying to steal some sleep, interspersed with waking each other up, to ensure we would acclimate to the six hour time-change in time to fence on Friday and Saturday. Not an easy task when your eyelids relentlessly pull you back to slumber so easily.

Mid-afternoon we arrived at a quiet rural location. Disembarking from the vehicles we were met with cool damp air which awoke our senses and brought us all to attention. Our first stop was to visit the Canadian Memorial at St. Julien to see the Brooding Soldier. The plaque proudly displayed the Canadian flag. www.veterans.gc.ca/eng/memorials/belgium/stjulien Our Belgian guide, third year Cadet Brecht Flamant, explained the significance and history of the memorial (unveiled July 8th 1923) and the very special soil that surrounded it; Canadian soil. Quickly the cadets realized that they were seeing and feeling history beyond a text book. I could see the importance of our first stop started to sink in as they quietly took in their pastoral surroundings and the meaning of the monument.

A short drive away we arrived at Tyne Cot Cemetery. This visit began in the Museum, where the 18-21year old RMCC cadets quietly read the handwritten letters of their peer generation from almost 100 years before. Glass cabinets held the excavated bits and remains of personal items that were once so treasured and now stood in to represent so many young lives lost. Multi-lingual plaques explained the battles of Yper that took place so many decades before. A quiet reflective mood took over the group as we proceeded outside to view the hundreds of white monuments, row upon row, in the Tyne Cot Cemetery. Belgian Cadet Flamant, a history major, again explained the details of what lay before us, of the horrors of the battles, and the mud and climate of war that consumed Belgium. The importance of being there in person had a resounding impact on us all, and in that moment, I think we all felt in a very new way the importance of the words “lest we forget”. Truly something we will never forget.

Our third stop of the afternoon was the Memorial Museum Passchendaele 1917. It was an impressive and well-laid out presentation of artifacts, photographs, films and wartime maps. www.passchendaele.be Due to a mix-up in the reservation for our group, the museum did not have a guide on site, however, our Belgian history major stepped up to give us the most detailed, outstanding and professional personal tour. We learned about the all aspects of army life, and death, above ground and in the trenches. The displays had incredible details, visuals, and fully explained the battles point by point. The tour felt like a historic journey in time from start to finish. It concluded in dark and dank replica underground trenches that gave you the full claustrophobic, cloistered, wet, dirty, and cold reality of life in the war. Two words describe this feeling; heavy and profound. I am so moved by this experience, and although we can never fully grasp the reality, I am confident that this experience will stay with the RMC cadet-fencers for many years to come and it was an important part of our visit to Belgium.

On our way to dinner in the town of Yper (Ieper) we passed through the Menin Gate and the Hall of Memory. The sheer magnitude of the half-elliptical arch was stunning and overwhelming. As we entered the town, the cadets all commented on the beauty of the town. Our restaurant was located just off the town square; cozy now with its festive Christmas lights, warm aromas and enticing Flemish home-cooked meals. The walls however were graced with black and white photos of the devastation and destruction of the town of Yper from almost a century ago. It was a telling reminder of the rebuilding it must have taken over the years to bring it to its full recovery in time for the upcoming 100th year anniversary. Now in November 2013 the town was magical; decked out in dazzling Christmas lights and trees, hiding from the visitor and the camera it’s sad and horrific past. This was the real irony of the night as we enjoyed our meals and friendly camaraderie with our new Belgian friends.

On Thursday we trained all morning to fight the jet lag, and toured historic and cultural sites in Brussels in the afternoon. The RMC Men’s and Women’s epee teams went on to fence very well in individual competition on Friday. The teams really took their military cadet competition by surprise on Saturday in the team events with the men winning Gold and the women winning Silver. The best part of the closely matched finals was having the other European delegations cheering for Canada! The teams victories were epic especially the men’s nail-biter , which was 44-42 versus France. Well done RMCC athletes!

The RMC Varsity Fencing program would like to thank the RMC Foundation for their generous support of this trip to the Royal Military Academy in Brussels, Belgium. The RMC fencing teams have been invited for seven years in a row to this event and this is the first time we were able to accept! The trip was structured to include military, academic, bilingual as well as athletic elements to ensure we were matching the four components of RMCC. A huge thank you to all the RMC Foundation donors whose contributions made this a reality! TDV