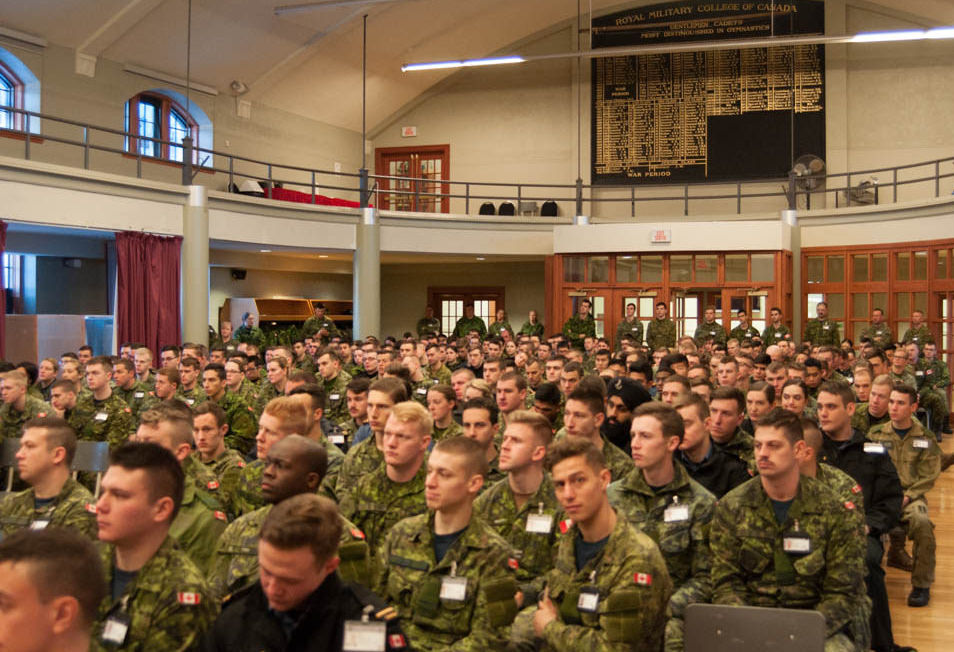 Caption: The second term Barmen Workshop was conducted by Director of Cadets, LCol Renahan in the New Gym last Wednesday, 13 Jan. (Article below)

Second Term – Bring it on 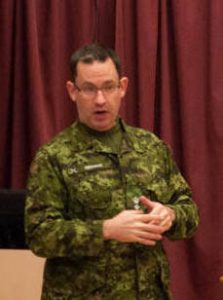 This week at the Royal Military College of Canada for Professional Military Training on Wednesday, January 13, 2016 all barmen had the Barmen Workshop conducted by Director of Cadets (DCdts).

For the Barmen Workshop the DCdts, LCol Renahan spoke to us about how he would like us to run the college and explained our responsibility as leaders at the College and what is expected of us. Some of the topics he covered were how important communication is throughout the Cadet Chain of Authority (CCoA), also that we must lead by example if we expect our followers to do what we ask.

He informed us that we are the ones who are in charge of the Cadet Wing and because of this there is a lot expected of us, but he ensured us that due to the rigorous selection process all barmen are well suited for this responsibility.

Following this brief all barmen were split into different groups depending on their bar position and received additional information pertinent to their responsibilities.

Although second semester at the Royal Military College of Canada has begun with frigid temperatures, spirits remain high for the soon-to-be 2nd Lieutenants of the Class of 2016. As a member of this class myself, I can say that it has been a long four years filled with sweat, tears and enduring friendship. The most impactful takeaway I will have when we march through the Memorial in Arch in May will be the strength that we, as members of the Canadian Forces, have when we support and look after one another.

Life has its ups and downs and it is the people you choose to surround yourself with who make you a better person. Until that day however, I will, as will the rest of the Class of 2016, continue to keep my spirits (and average up) through these final months of life at RMC. It is time to start saying goodbye to the people and institution that has sheltered us for these past years and prepare to strike out on our own and take the valuable leadership lessons we have learned with us.

Here are a few comments made by other members of the class of 2016:

I feel really positive about the semester, especially now that the end and the ultimate reason for the last few years is in sight. My focus this semester is to make sure I have positive habits and systems established with a larger goal in mind, so I can already begin to prepare myself for the transition into a different environment. My goal is to never stop learning outside of school, and with the nature of my career, I don’t think I will have any problems with that. For now, I’ll learn everything else that I can from this last stretch to be able to confidently move forward into something new.

Last semester, I’m almost done! First year seems so far away now. I have definitely learned a lot about people, about myself and leadership through these four years. This semester I would like to focus on giving back. About sharing what I’ve learned about RMC, the military, and hopefully making life a little easier for those just starting out here. One day, they will be in my shoes, and beyond excited for what is to come after graduation.

This last semester at RMC is truly an interesting moment in my life. The thought of being commissioned into the Canadian Forces and starting a whole new phase of my life is at the same time exiting and scary because of all the unknowns which lay ahead. However, as hard as may be at times, it is still important to stay focused on what lies ahead during this final semester. While the thought of graduating is very exciting, I find that the best way for me to continue to stay focused on school is to not think about graduating and to take each day as it comes, aiming to make the most out of it and to leave a positive impact on this school before I leave to make it better for those coming after me.

I am filled with hope and anticipation for the future, and I wish the rest of my fellow classmates good luck in buckling down through to the end of this incredibly formative stage in our lives.

The Way I See It 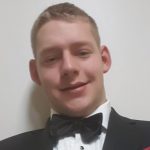 Another year is starting at the Royal Military College of Canada after a well-deserved break. Snow has blanketed Kingston and most of the College has donned windbreakers, toques, and gloves to help combat the frigid temperatures. I spent my break in St. Albert, Alberta and enjoyed warmer than normal weather with little snow and got to catch up with friends and family.

I hope to be back home again on 15 February, the start of reading week.

Cadets at the College, myself included, are perhaps a little too relaxed. Inspections will soon be in full swing and the new barslate has a lot of planning to do for the next five months to be a success.

This upcoming semester, I will now be responsible for a section of third and fourth years while helping coordinate the Robbie Burns dinner that is coming up later this month at RMCSJ.

Men’s Varsity Rugby is back in full swing and started with a friendly scrimmage against SLC on 13 January and host tournament of Sevens Rugby on 16 January.

As always, the New Year means some of my friends will be leaving the college, either graduating or moving onto better things after having grown and developed at the College. Whether or not these people march through The Arch with the Class of 2017 and I, we should not forget the contributions they have made to the College through the impact of their being here.

The Academic Wing is working hard on the saving grace of some of those who otherwise may have been forced to leave the college – supplemental exams. This late Christmas present took place on 16 and 17 January; so that students may retake the exam without repeating the course or facing removal from the ROTP programme – specific details are found in RMCC’s academic regulations. 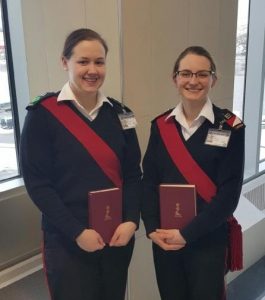 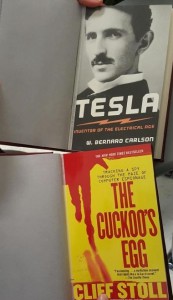 Caption: NCdt Williams and OCdt Brooks pose with their awards – bounded copies of “The Cuckoo’s Egg” by Cliff Stoll, and “Tesla: Inventor of the Electric Age” by W. Bernard Carlson.

A Night at the Pub for the Electrical and Computer Engineers

This past Thursday, the Electrical and Computer Engineering (ECE) Department, with the assistance of the Kingston IEEE Branch, hosted a pub night at the Sir John A Pub on King Street. The event was organised by the RMC undergraduate and graduate student branch heads, OCdt Katerina Brooks (26693) and Lieutenant-Commander Tim O’Brien.

This pub night provided RMC students the chance to enjoy an informal and fun evening out with their professors and friends, as they discussed everything from classes to thesis projects to their favourite books, over drinks and snacks provided by the IEEE Branch. As well, the ECE Department Head, Dr. Scott Knight, presented awards for top marks for the 2014-2015 school year to the following officer cadets:

The RMC student branch would like to thank the assistance of the IEEE branch in providing funds for food and prizes, and to all students and department members who attended the event. It was a great success!

Catching up on two PAG articles from last term… 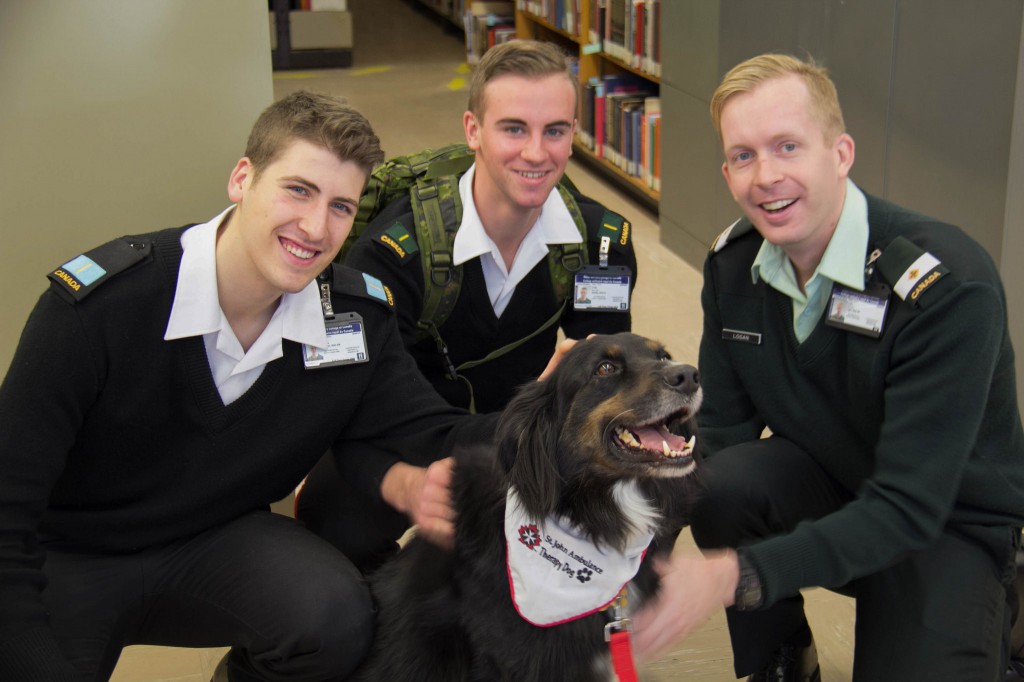 Dogs: Must be exam time

They let dogs in the library?! That’s right! St. John’s ambulance’s teams of therapy dogs visited the Royal Military College during the stressful exam season. Laureline Sangalli and Cindy Berry, along with their dogs Ziggy and Tohe visited during the lunch hour of December 8th. This visit at the start of the exam period allowed cadets to de-stress before they crunched out their final exams. As the end of exam period rapidly approached, Scott Bates and Laureline Sangalli with their dogs Avry and Ziggy provided a second therapy visit on the evening of December 14th. What a success! This study break was much needed as the library flooded with cadets! We’d like to thank St. John’s Ambulance’s therapy dog teams for providing two great therapy dog sessions for the cadets.

With the exams in full motion, Thursdsday, December 10th, the Peer Assistance Group (PAG) held an end of semester pizza night in the cadet mess. 30 extra-large pizzas were eaten by the mass of cadets who had stopped by to grab a free bite to eat in less then five minutes!

The pizza night offered an opportunity for the members of the Cadet Wing to relax despite the ongoing stress that is exams. Around 80 cadets were present to have a few drinks and a bite with their friends. With only one week till the holidays, the event was well received by the members of the cadet wing that needed that little bit of motivation to make it to the end of their exams.