Cadets Back and So Are Skylarks

With the new DCdts, LCol Patrick Lemyre, expressing his love for skylarks and with the new approval system in place, the intent in the skylark seen above, where the tables in the Dining Hall were rearranged to say “C Div”, was to show that skylarks were still something supported at RMCC, and that even with the new system, it was possible to do skylarks of bigger scope than just dressing Brucie up. The skylark had 2 aims. First, it would be the first ever divisional skylark since the divisional system was brought in last year. Second, by having only senior barmen participate, it would show the rest of the wing that skylarks which follow the rules are not only accepted, but also encouraged.

The skylark itself was simplistic in every way, but hopefully, the message was strong enough to push other cadets to build on it and impress everyone with their originality. 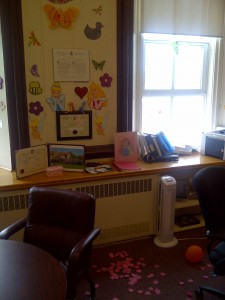 On the morning of 27th August, as the Director of Cadets arrived in his office, he was surprised to see that it had been re-decorated over night by members of the Cadet Wing. When LCol Lemyre was asked by the CCWO what he thought about the sky lark, he simply replied: “I love what they did with the place.” Congratulations to 10 Sqn! 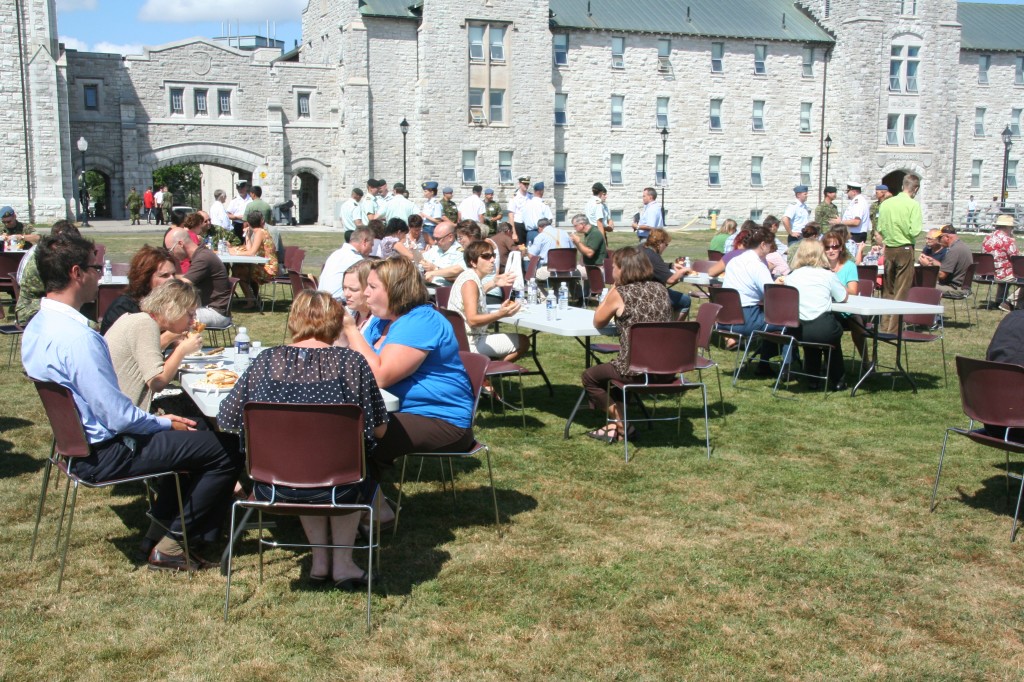 The Staff of RMC, including members of the Training Wing, the Academic Staff, and the Support Staff, took the time this past Tuesday to mark the start of the new academic year with a BBQ on the inner field.

Photos from the event: 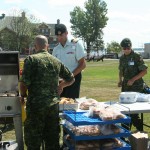 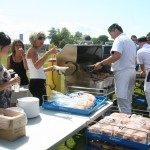 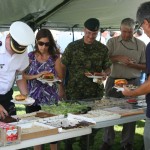 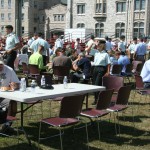 Otter Sqn Gets Together With Family BBQ

Otter Sqn got in the celebratory mood with a BBQ of their own this past Friday, where Sqn members and their families had the chance to mingle at the Senior Staff Mess. The five new First Year members of Otter Sqn were in attendance – pictured below in the 5 white T-shirts. Commandant BGen Eric Tremblay, Director of Cadets LCol Patrick Lemyre, College Chief Warrant Officer CPO1 Keith Davidson, Training Wing Sergeant Major MWO Wallace Rideout and Maj Ralf Urzinger, C Div Commander, were also present. 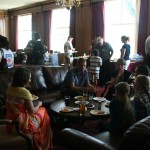 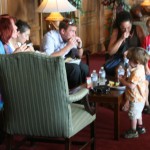 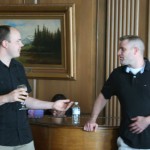 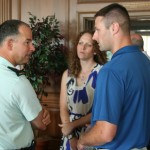 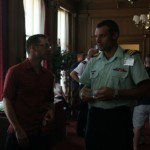 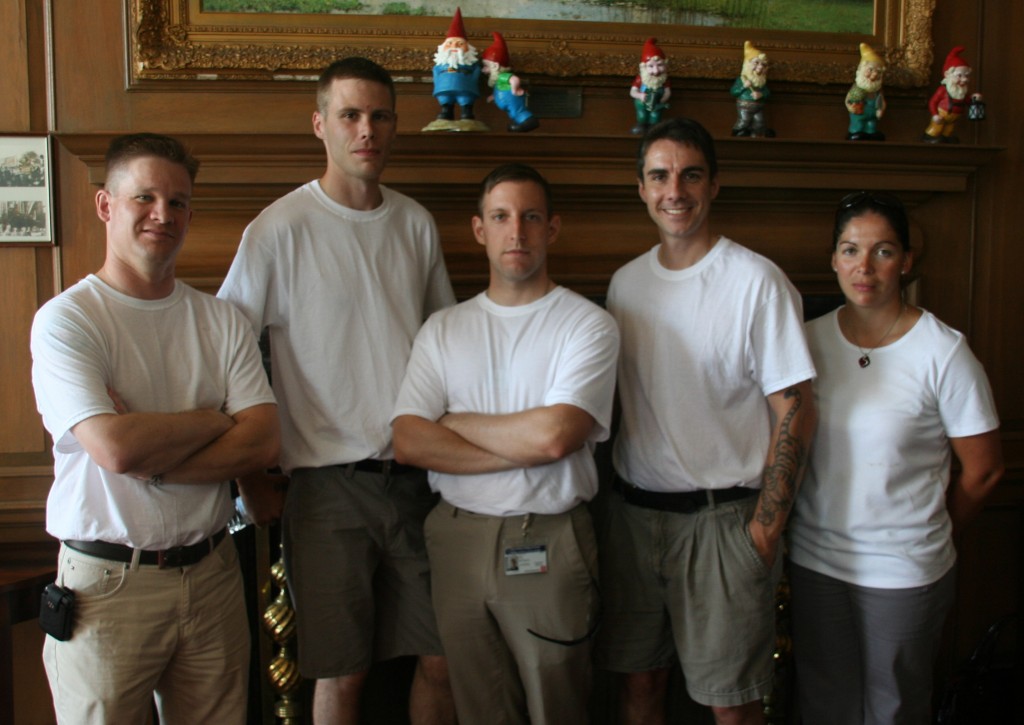 As the Cadet Wing starts a new year, one which heralds so much change for the College, with many new faces and a reshuffle of which Squadrons live in which buildings on campus, it was only fitting this past week that three Officer Cadets started something new themselves. In a ceremony presided over by BGen Eric Tremblay, College Commandant, 26000 OCdt Kayleigh Reading, 26341 OCdt Edward Plante, and OCdt Amanda Needham, from ALOY, relinquished their status as Officer Cadets and moved to the ranks of Non-Commissioned Members.

“There are many ways to serve the Canadian Forces,” BGen Tremblay told the Cadets, “and while we say that the goal of RMC is to produce officers, well-educated, this is also the place to decide what you want to do with your life. I congratulate you on making the decision to continue to serve the CF.” 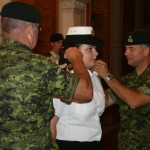 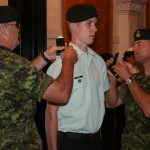 At the beginning of every academic year, the College roles out the red carpet for the 2nd Year Cadets newly arrived from RMC Saint-Jean. This year’s Meet & Greet was presided over by members of the Peer Assistance Group, or PAG, who provided the new 2nd Years with an opportunity to mingle with and to get to know those 2nd Years who did 1st Year in Kingston. This was followed by a short explanation of who PAG is and what it does, as well as an opportunity for any 2nd Years who wished to join PAG to do so. 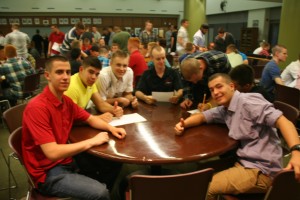 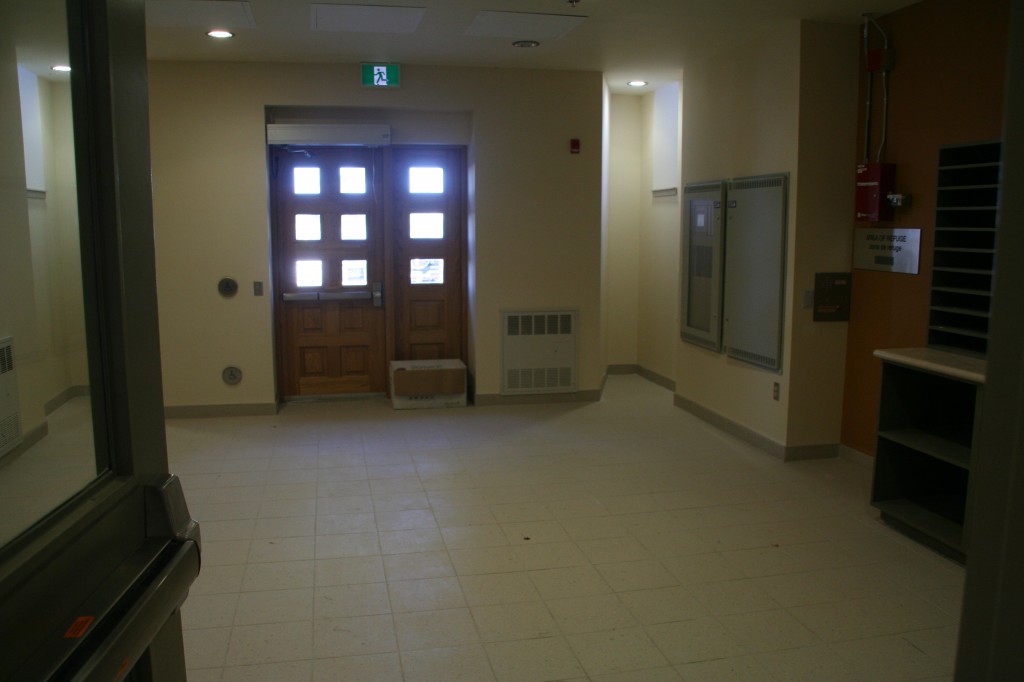 It’s Getting There: A First Look Inside Fort Champlain

It’s the question that’s been on everyone’s mind as Cadets return to the College from summer leave. With Cadets doubled up in rooms, and many living in temporary ones, everyone wants to know when the Fort Champlain renovations will be finished. And the answer…? As was evident in the current state of Fort Champlain, the renovations are nearing completion.

“It’s getting there,” said Heather Wallace, RMCC Barrack Warden. “The top floors are just about done, and there’s still some work to do in the basement, but other than that, it’s pretty much just small things, just little touch ups here and there.” And as many of those small things are found in the hallways and common areas, they don’t impact on the Cadets being able to live in the building, so they can move in before all of those details are taken care of. “They should be in in another couple of weeks,” Heather Wallace said.

More photos of the renovations: 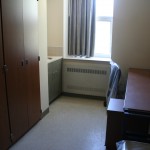 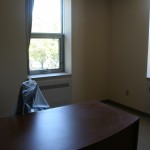 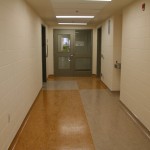 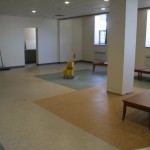 Unless otherwise stated, articles and photos by 25366 Mike Shewfelt