Ball hockey bragging rights go to 4Sqn – “C” upsets “A” on the ice – 6 Sqn are the best dodgers – 2 impresses in the water & 5 Sqn still dominates on the basketball court. 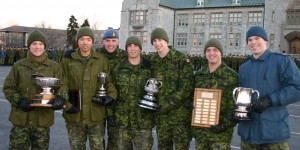 Director of Cadets, LCol Tony O’Keefe presented the championship trophies to the captains from each winning team from the Winter 09 term.

Intramurals are now finished for the 2008-09 school year, and while all teams and participants are applauded for their hard work and determination during the weeks upon weeks of competition, at the end of it all some teams found themselves enjoying the thrill of victory while others experienced the bitter taste of defeat. Unfortunately, as with every playoff battle, there must be winners and losers, but the level of competition throughout the Winter 09 term provided excitement for any and all spectators and squadron supporters. After surprising everyone with a thrilling semi-final victory over a strong and undefeated 5 squadron team, 4 squadron emerged as ball hockey champions as they beat 10 squadron 6-3 in the finals. On the ice, in what some might consider an upset, ice hockey defending Tier A champions A division lost to C division 5-4, as C Div came from behind in the third and deciding game to secure the “down to the last minute victory”. On the Tier B side of things, A Div reigned as back-to-back champions as they dispatched B Div in a quick and convincing 2 straight games. In dodge ball, 6 squadron was victorious at dodging just enough of 13 squadron’s balls, with a very close result of 8-7. In the pool, 2 squadron beat the Speedo strapped 12 squadron as both teams showed everything they had to the cheering crowd. And last but not least, 5 squadron continued to show its supremacy on the hardwood as they took 4 squadron to school and taught them a lesson about defense and ultimately offense with a final of 58 – 33. 5 squadron is no stranger to hoisting the basketball hardware as they have won multiple times in the past few years. 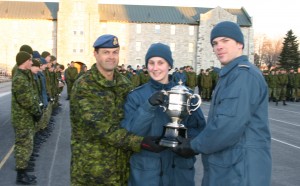 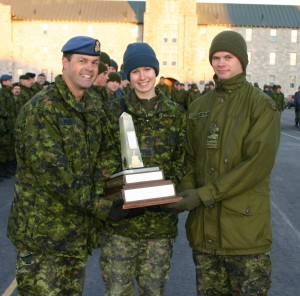 (L)  Commandant presents the Peter Fraser Birks Trophy to the male and female Most Valuable Player Award winners for the 08-09 IM season.

(R) Commandant presents the Marshall Memorial Award to the male and female Most Sportsmanlike Award winners for the 08-09 IM season.

The Winter 09 awards ceremony was a huge success. Thankfully the weather co-operated much better than it did in the Fall, and the bi-lingual award presentations did well to highlight all squadron team champions and major award winners. Chrome aluminum water bottles were the trophies of choice yet again this term for all individual awards, while championship teams were presented with plaques to be hung in their lounges to show off their achievements. Congratulations to all winners.

The newly formed All Star games were played for the first time in RMC history on the 31st of March. The anticipation for these games was hig.

e-Veritas looks for a wrap-up report on these tilts next week! 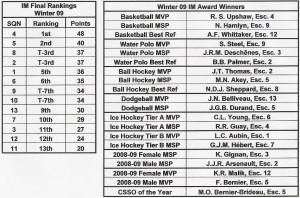 RMC Water Polo: A Look at What Was and What Will Be

It’s been an eventful year for RMC Water polo, significant growth and talent has been seen over the months since we all met, some for the first time, back in September. Some were veterans from previous years, but a large portion of the team consisted of rookies who had merely enjoyed intramural water polo so much that they wanted to learn more. 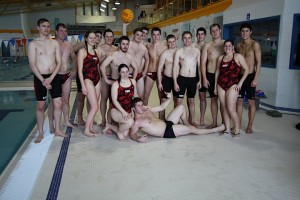 It was an eventful season from the beginning, with the game against the ex-cadets on Reunion Weekend. Our youth and vigour, though a powerful asset, was not enough to beat the experienced ex-cadets as they defeated us, though not by an unreasonable margin. They, being the good sports they are, congratulated us on our efforts and thanked us for the game when we all went out for supper. The valuable lessons we learned in this fight then encouraged us to continue with our training and work diligently preparing for our annual tournament.

The Annual RMC Water polo tournament was held on the 24th and 25th of January. Six teams were entered in the tournament: The Titans, The Triggerfish A and B, The University of Ottawa women’s Varsity team, The Sharks, and us. Against the fierce competition we performed well, placing 4th in the tournament after losing in the semi-finals. This merely tempered our resolve to work harder as, in a few weeks, we would face off against WestPoint.

We were all surprised when we were first told that West Point wanted to play us during the annual exchange weekend. Naturally, the team was anxious to have this chance to play another team, especially a competitive one, so we quickly accepted and were soon on our way south to test our skills. An unfortunate loss resulted, but we played admirably and enjoyed every moment of the battle, doing what we could to best represent RMC.

Now with the season drawing to a close we ask, “What is there to look forward to next year?” The answer is simple: improvement. RMC Water polo is already beginning to plan out the up coming season, and intends to increase the number of games and tournaments we enter into, thus enabling us to gain the experience necessary to play at a higher level. Furthermore, we are investing in new equipment (specifically caps, and, for those who need them, bathing suits.) Lastly, we plan to put more emphasis on training and skills, making us a more challenging team to play. We intend to continue doing our utmost to represent the finest qualities of RMC, and to enjoy doing so by playing the sport we love.