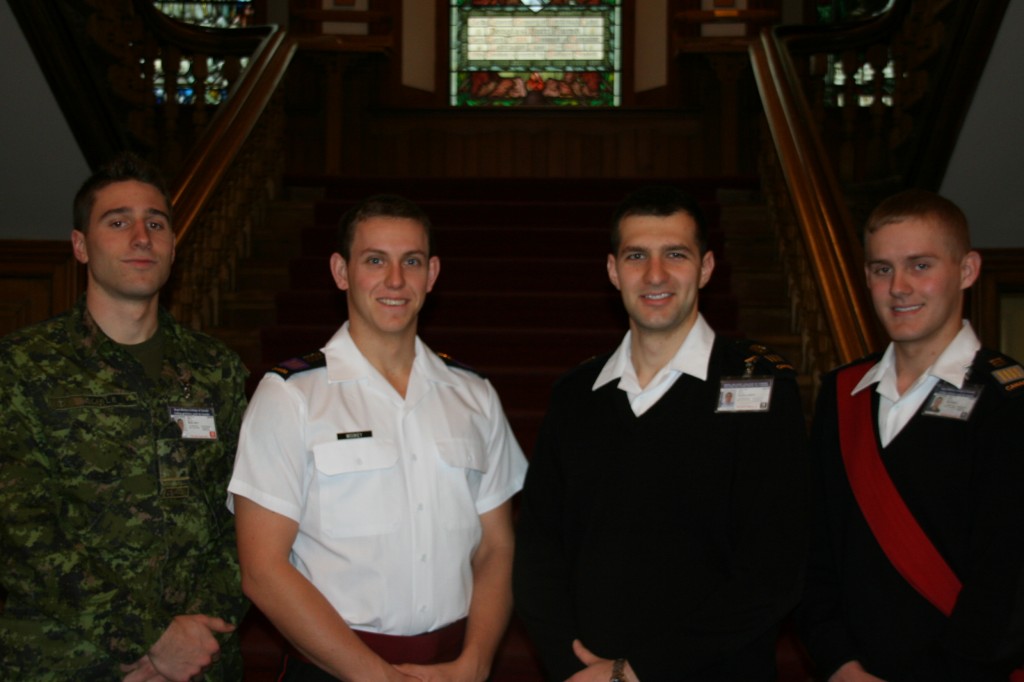 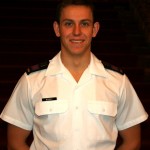 OCdt Ian Wookey is 21 years old and was born and raised in Sarnia, ON. He attended St. Patrick’s High School where he graduated as an Honour Roll student. Throughout high school he played on numerous sports teams including the track and field and badminton teams, as well as serving as captain of the volleyball team and as a starter on the basketball team which won an OFSAA Championship in 2005. He also played competitive soccer for the city’s regional team.

Upon graduation in 2005, at 16 years of age, he joined the CF as a Pilot and completed the first part of his basic training at CFLRS in St-Jean-Sur Richelieu. He entered first year in 5 Sqn in the sciences stream and joined the varsity men’s volleyball team. The following summer he returned to St-Jean for completion of BOTP and language training.

In the summer of 2007, Ian was posted on OJT to 4 Wg HQ in Cold Lake, AB, where he worked at the Wing Visits Officer and played rugby for the Cold Lake Penguins. Returning to RMC in 3rd year, now studying as a Psychology major, Ian moved to the new 11 Sqn and took on the Deputy Cadet Squadron Training Officer position. He also assisted in the reopening of Fort Haldimand in January 2008 as a cadet OPI.

In the summer of 2008 he completed Primary Flight Training in Portage la Prairie, MB before returning to RMC, again as a 3rd year, due to restrictions when he changed academic programs. During the past summer of 2009, he worked in the A3 Ops section of 1 Wg HQ at CFB Kingston.

This year, Ian has taken on a dual role as the Cadet Squadron Leader (CSL) of 11 Sqn and captain of the varsity volleyball team. He is also a member of the 400 Club, and is an active supporter of varsity athletics at the college. His brother, OCdt Matthew Wookey (25132) is a 3rd year cadet in 6 Sqn who plays on the varsity men’s basketball team. His uncle, 16455 Maj (Ret’d) Tim Lannan was a Redmen hockey all-star who graduated in the class of 1988.

After graduation Ian will carry on to finish his flight training in Moose Jaw, SK and hopes to continue his career in the Forces indefinitely as a helicopter pilot. 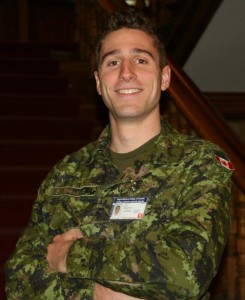 My name is Eric Bélisle, I am a 21 year old Naval Cadet From Montreal. I am currently studying at the Royal Military College where I will be graduating in 2010 with an Honours degree in Business Administration. I have various interests such as hiking, physical training and skiing. I enjoy playing football, broomball, and improving my skills to play hockey. I joined the Canadian Forces to gain professional experience and various operational challenges at an international level.

I attended the Collège Sainte-Anne, a high school in Lachine where I also played football. Upon graduation, I joined the Canadian Forces at the RMC Prep year, in Saint-Jean-Sur-Richelieu. After completing my first year of study, I went on to CFLRS to complete both IAP and BOTP before starting FYOP at RMC Kingston. During my second summer in the military, I completed NETPO at CFB Esquimalt, BC. The past two summers I had the opportunity to have OJT’s both at CFB Esquimalt, BC and at NDHQ. This past semester, I was appointed as the Cadet Flight leader for the incoming first years of my squadron.

My main goal in the Canadian Forces is to get the training necessary to be a successful Naval Logistics Officer, and to learn about the complexity of management in an operational context. As I see it, RMC plays a key role in setting good foundations for a successful career.

My name is Chandler Zedic, I am a 22 year old Army Logistics Officer Cadet from Oshawa, Ontario. I am currently in my 4th year of studies pursuing a degree in Honours Business Administration with a minor in English. I am an avid runner and I also enjoy participating in most sports. I am a musician and I can play the clarinet, alto and tenor saxophone, and a bit of oboe. In my spare time I have been learning to play the bagpipes too. I have a small but close knit family residing mostly in and around Oshawa. My grandfather was a former pilot in the military and my brother is currently in the military as a Private with 1RCR in Petawawa. He also recently returned from Afghanistan.

During my high school years I was involved in a number of activities. I was a member of several bands at the school and community levels. I also tutored other students in math and was a member of the student council. Also, during this time I was an active member of the Army Cadet Program, achieving the rank of Cadet Chief Warrant Officer. This fostered an interest in the military for me and assisted in my decision to join the CF.

I enrolled in the military in August 2005 and shortly thereafter went off to the Preparatory Year at what is now CMR Saint-Jean. During my prep year I received basic military training in order to prepare for basic training and also had the opportunity to lead and command my flight to victory at the Squadron drill competition. In the summer of 2006 I did IAP and BOTP at CFLRS before coming to RMC Kingston in the fall. The summers following I did SLT at RMC, achieving a BBB profile; CAP at CTC Gagetown; and the International Four Days March Nijmegen, in The Netherlands.

Upon graduation I will go to Borden to conduct my phase training at the CF School of Administration and Logistics. After my phase training, I am hoping to be posted to one of the three service battalions in either Edmonton, Petawawa, or Valcartier.

My name is Ross Gouseinov, I am a 22 year old Officer Cadet From Montreal. I am currently studying at Royal Military College where I plan to graduate next year with Honours Politics and a minor in Economics. I have been living in Canada for 17 years. I was born in Russia on September 4th 1986 and immigrated to Canada in 1992. I fluently speak three languages (English, French and Russian) and get around with Spanish. My interests are reading geopolitical literature and engaging in physical activity, which I believe are fundamental building blocks for any officer in the Canadian Forces. I enjoy the outdoors, most notably hiking and martial arts. I try to spend as much time as I can in my cabin up north of Montreal. I enjoy playing soccer, basketball, handball and am very lousy at golf. I have an extremely patient girlfriend who continues to endure me. I have done Community Work in Kingston, most notably helping out local churches with donations. I joined the military for a sense of adventure, to have the privilege to travel overseas while giving back to this country.

In High School, I was captain of the basketball team three straight years. I have won League MVP in 2002 and athlete of the year in 2003 at my school. I have participated in over 4 Karate regional championships from 1996 to 2000 where I finished in the top three everytime. I finished with a 3rd degree brown belt. I won 2nd place at a regional chess championship in 1998. Academically, I have a DEC ( Diplôme d’Études Collegiales) In Pure and Applied Sciences from Dawson College, a CEGEP in downtown Montreal. There, I have consistently finished semesters with over 85% general average putting me on the Dean’s List 3 semesters in a row. At RMC, in 1st year Arts, I came 1st out of 150 and got on the Dean’s List. In 2nd year, I was the top student for both semesters in the Politics and Economics department. In 3rd year, I finished with a general average of 85% and was again ranked 2nd in the department. I would like to pursue a Master’s Degree in international relations or political economy sometime in the future.

Militarily, before I joined the regular force I did a stint of a year in the reserves. I served with the Montreal based Canadian Grenadier Guards (Infantry) from May 2005 to April 2006. While there, I was fortunate to have done BMQ, SQ and BIQ. I switched to the regular force on June 16th 2006 and started IAP one week later. I returned to St-Jean the next summer for BOTP, where I got top candidate of the company as well as parade commander. In the summer of 2008, I did CAP in Gagetown. Recently, I was selected as top cadet in my squadron and appointed Company Commander for the fall semester at RMC.

I intend to stay in the military as long as possible and make it a career. After both my phases of BIOC, I would like to get posted somewhere in Quebec or Ontario since it would be close to home. I am thinking of perhaps specializing in HUMINT later on in my career or ask to get attached to a special force unit as their intelligence officer. I am looking forward to my second career oriented course this summer.