E3161 Victoria Edwards (RMC 2003) interviewed 14429 Col John Fletcher, CD (RMC 1984), who is currently serving as the Director of Chaplaincy Strategic Support and as the Principal Chaplain (Protestant). In November 2010 Padre Fletcher was installed as Archdeacon of the Anglican Military Ordinariate of Canada.

e-veritas: Would you describe your journey from Cadet 14429 to Padre Fletcher? 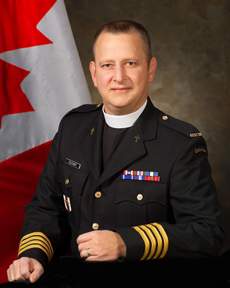 14429 Col John Fletcher: I graduated with a Bachelor of Science degree from the Royal Military College in June 1984. During my years at RMC, I discerned a call to pursue ordained ministry, and was accepted for study as a student chaplain. Following my graduation from RMC, I postponed completing my obligatory service, until after I had successfully completed all academic and professional formation required of a military chaplains.

I graduated with a Master of Divinity degree from Trinity College, University of Toronto, in 1987, was ordained as an Anglican deacon in the Diocese of Fredericton, and was appointed as the assistant-curate in the Parish of Hammond River, where I subsequently became Priest-in-Charge, following my ordination to the priesthood in June of 1988. After completing the required two years pastoral experience working in a civilian parish, I was ready to be employed in the CF as military chaplain.

I began my full-time service in the CF chaplaincy in 1989, when I was promoted to the rank of Captain and posted to Calgary, to serve for four years as a chaplain to the 1st Battalion, Princess Patricia’s Canadian Light Infantry. In 1993, I was posted to Halifax, where I would serve in various positions for eight years. After completing three years as a sea-going unit chaplain and a year-long French course, I was promoted to the rank of Major, in 1996, and was appointed as the Senior Fleet Chaplain. Two years later I was appointed as Formation Chaplain in MARLANT HQ.

e-veritas: How did you come to be a sea-going unit chaplain?

14429 Col John Fletcher: I served for a total of five years as sea-going chaplain in the Fleet in Halifax, and sailed in a wide variety of East Coast ships including frigates, destroyers, and Maritime Coastal Defence Vessels (MCDV) and even twice in our old oberion class submarines.. Sea-going unit chaplains conduct religious services, provide pastoral counselling, give spiritual leadership, and supply religious education. Worship services were often held in the NCM’s or Officer’s mess on Sunday morning when we were at sea, or sometimes on Sunday evenings following a weekend port visit once we were underway and at sea again. The use of ship’s bells as baptismal fonts for shipboard christenings is a memorable tradition for many sailors and their families. For chaplains, establishing a ministry of presence is among the most important skills we learn. Connecting with sailors, establishing a rapport with them and building relationships, is vital to the ministry of care and council we are then able to provide. Depending on the tasking, the members of a ship’s company may not be sure what they will experience or encounter, and how they will be impacted by the nature of their mission. The toll — physically and mentally — can be significant, and there are always the pressures and concerns that come with being separated from home and family. Sailors appreciate a chaplain simply being with them, demonstrating care and compassion – living and serving alongside them, standing watch with them and sharing in the life and work of the ship’s company, and participating in such evolutions as storing ship, and landing gash, etc..

e-veritas: Is it important for you to maintain relationships with clergy / faith group leaders and other ministries outside of the Military?

14429 Col John Fletcher: Yes. In order for our military chaplains to be truly effective within the ecumenical and multi-faith ministry context of the CF Chaplaincy, it is absolutely essential they remain thoroughly grounded in, and well connected to, their own religious traditions and faith communities. The Chaplaincy encourages chaplains to remain active within their respective faith group, and also encourages faith groups to be supportive of their members serving in the CF as military chaplains. For example, I am currently a member of the Board of Director’s of my national church’s newspaper, “The Anglican Journal”, and serve as an honorary assistant in the Anglican Parish of All Saints Westboro, in the Diocese of Ottawa. In November 2010, I was installed as the Archdeacon of the Anglican Military Ordinariate of Canada.

e-veritas: Canadian Forces Chaplains train and work in settings where they interact with religious traditions other than their own, be they Christian Denominations or other Faith Groups. How does this work?

14429 Col John Fletcher: Canadian society and the CF are rapidly becoming more diverse and the Chaplaincy is enhancing its capability to respond effectively to changing cultural and religious demographics. CF chaplains are recognized throughout the world for their ecumenical and multi-faith approaches to Chaplaincy, and we are committed to developing and expanding that expertise. We are called to provide religious and spiritual leadership within an increasingly diverse context, and we are eagerly addressing the opportunities and the demands that this presents.

e-veritas: The Anglican Ordinariate of the Canadian Forces sponsors a bursary for students enrolled in full time theological studies. Would you describe it?

14429 Col John Fletcher: The Anglican Military Ordinariate of Canada has sponsored the Ivor Norris Bursary for over twenty-five years. The administration of this bursary program comes under the purview of the Ordinariate. The bursary is awarded to applicants (annually) who have a personal connection to the Canadian Forces through personal military service (past or present), being married to or the child of someone with past or current service. The applicant must be sponsored by a Bishop for ordination within the Anglican Church of Canada and enrolled in theological studies leading toward ordination.

e-veritas: What are your memories of Maj (Ret’d). A.I. Wakeling, RMC chaplain from 1981-88 and of the RMC Protestant Chapel?

14429 Col John Fletcher: Padre Wakeling was a real role model for me of how to be a priest and of how to serve as a military chaplain. He had an open door policy and advocated to assure that the religious and spiritual needs of the cadets and staff were accommodated and celebrated. In that role, he was a pastor and mentor for me and for so many other cadets, as well as for members of the military staff and faculty. Padre Wakeling and his wife became like family members for me. They often invited me for to their home for dinner, and we have kept in touch even after he retired in Kingston. I am so grateful to him for the example of leadership, care and friendship that he provided to me during my very formative years at RMC and even since that time. I recall fondly my year serving with Padre Wakeling as server at St. Martin’s Protestant Chapel in Yeo Hall at RMC, and for the many way that he help to nurture and shape my vocation as an Anglican priest and as a military Chaplain. [The stained glass memorial windows in the RMC Protestant Chapel feature the Royal Military College Crest, Timothy, Dove, Open book, Lamb of God and Chalice c. 1963 by Robert McCausland Ltd.]

e-veritas: What are your memories of Religious services and special occasions at RMC?

14429 Col John Fletcher: Since I had always regularly attended Sunday worship services with my family, growing up, it was natural for me to become a regular member of a worshipping community when I joined the CF and moved away from Home. With so much that was new and changing in my life during these formative years, it was important for me to find some constant. An anchor to hold me, a rock I could count on. Attending chapel services, both during my BOTC in Chilliwack, and at the College during recruit term, became very important occasions for me. Once I was free to leave the college on weekends, I actually sought-out involvement within some of the Anglican parishes in the city of Kingston, including

n.b. St. Mark’s Anglican Church Barriefield.. When the Royal Military College celebrated its centenary in 1976, the College laid up its Queen’s Colours in exchange for the “Spanish Bell” that had been placed in St. Mark’s tower over 100 years previously.

n.b. When Copper Sunday was first established at St. Andrew’s in 1880, Officer Cadets took handfuls of copper pennies, throwing them towards the offering plate to make as much noise as they could. The tradition continues today with Officer Cadets pouring pennies into the plate from military-issue black socks.

e-veritas: What are your memories of other other members of the College staff?

14429 Col John Fletcher: Had it not been for the incredible support of the then College Commandant, 3572 MGen (Ret’d) Frank Norman (RRMC RMC 1956) (photo left), and of the College Administration Officer, Col (Ret’d) A.H. “Harky” Smith, I would never have been permitted to change classifications from pilot to chaplain, while I was still an Officer cadet at RMC. During my years at RMC, when I discerned a call to pursue ordained ministry, BGen Frank Norman was committed to represent my unique situation to NDHQ. General, Norman, Colonel Harky Smtih, and Padre Alex Wakeling were so very supportive of me, and together, under General Norman’s leadership, they were able to accomplish what I had thought would be impossible. I didn’t realize it at the time, but apparently NDHQ was very reluctant to have RMC Cadets change from one MOC to another, especially from a pilot to a chaplain MOC. General Norman wrote a strong letter of reference, and obviously spoke to the right people in Ottawa, and as a result, I was one of three military college students accepted for study as a student chaplain.

e-veritas: What happened to the other cadets who transferred to the Chaplain MOC?

14429 Col John Fletcher: 13523 Rev Marc Potvin (CMR RRMC 1983) served as a military chaplain at the North Bay, Bagotville, Petawawa and Shearwater Forces Bases and was called to serve as Senior Pastor of Centreville Baptist Church in the Annapolis Valley in August 2000. There was also a Roman Catholic student from CMR, Rev Bruno Ruelle (??) who I believe is now serving in a civilian diocese in Europe.

n.b. Although (to my knowledge) there were never any other serving military college cadets who actually changed classification to chaplain, while still at Military College, there have been several RMC graduates who eventually became military chaplains or civilian clergy, ( e.g. 14428 Rev Don Fisher (RRMC 1984) is Pastor at Calvary Baptist Church in Aldergrove BC.)

e-veritas: Have you had the chance to return to the College grounds?

14429 Col John Fletcher: Yes, in the late 80s and 90s the Annual Protestant Chaplain Branch Retreat and Seminar was held annually at the RMC in Kingston. These conferences provides the opportunity for the professional and spiritual development of our chaplains and for fellowship as a Branch. Back when our conferences used to be held at RMC, I always enjoyed being back on the college grounds, sleeping in my former dormitory, eating in the dining hall and attending seminars, business meetings and worship services in the Academic buildings, Currie Hall and the college chapels. Since the amalgamation of the former Protestant and roman catholic Chaplaincies in the mid-90’s into a single multi-faith CF Chaplaincy, our annual retreat and seminar has outgrown the RMC facilities.

e-veritas: Did you attend your class reunion? Do you still see any of your classmates?

14429 Col John Fletcher: Absolutely. The last time I returned to RMC was for my 25th class reunion. I was delighted to see and to recognize so many former classmates and faculty. I currently serve with several former classmates. 14585 BGen John Madower, OMM, CD (RRMC RMC 1984) assumed the duties of Assistant Chief Military Personnel in 2010. 14369 RAdm Andrew Smith, OMM, CD (RMC 1984) was appointed Chief of Military Personnel on 24 June 2010.