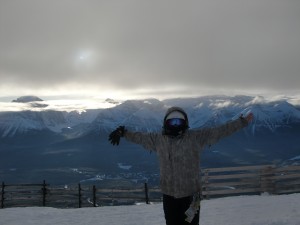 In the dark days of last November, 2nd year cadets 25434 Jean – Christophe Ouellet (photo) and 25194 Alex Kisielius decided they should do some skiing and snow boarding and see western Canada for the first time.

When Alex got injured, J-C decided to do the trip alone and got a service flight from Trenton to Abbotsford. He made his way from there to a few BC ski areas and finally took a midnight bus from Revelstoke to Lake Louise. There, he was to hook up with 25276 Ben Apedaile and 5675 Dennis Apedaile, who were to ski with him and take him home for a couple of nights before the lads’ commercial flight from Calgary to Toronto and bus to Kingston.

J-C had a brief nap leaning against his snow board, then took a local bus saying “Lake Louise” which went to the large hotel on the south side of the valley.

The ski hill is on the north side. Then the text messaging got fast and furious. Ben was not skiing without his pal. J-C then wangled a ride back to the village and said he would walk, carrying snow board and back pack, up to the hill. More phone calls, another ride and we were all on the hill together for a fine day’s ski.

The only thing of any concern to J-C was whether he owed me almost 200 beers. He didn’t.

His resourcefulness may have been enhanced by the example of his father, 13154 Jean-Claude Ouellet, or his mother, Carole Martineau, RETP Ottawa U, or his brother 24179 Alexi Ouellet, a 2009 grad.

Meanwhile, Alex — grandson of Justin Anthony Kisielius, an ROTP Loyola (Concordia) grad and Royal Canadian Dragoons officer — also made it onto the hills around Ottawa.

The first company I ever worked for coming out of RMC was Coopers & Lybarand Chartered Accountants. As an “alumnist”, I get this very handy guide sent to me. It covers a number of useful topics which may prove useful in the preparation of your 2009 tax return. Hope it helps a bit.

“The only difference between death and taxes is that death doesn’t get worse every time Congress meets.” Will Rogers

“Unquestionably, there is progress. The average American now pays out twice as much in taxes as he formerly got in wages.” H.L. Mencken

The item below comes via Al Tattersal:

Kinsgton composer Oscar Telgmann’s light-hearted ‘military opera’, LEO, THE ROYAL CADET, continues Toronto Operetta Theatre’s Twenty-fifth Anniversary Season with a Preview performance on Wednesday, February 17 at 8pm and official Opening Night performance on Friday, February 19, with subsequent performances on February 20 and 21 (2pm), 2010. TOT is the undoubted Canadian leader in presenting the masterworks of the lyric theatre in all its variety and has, over 25 years, produced musical entertainment that includes comic operas, operettas, zarzuelas, opéra bouffe and Broadway musicals.

TOT’s Founder and General Director Guillermo Silva-Marin has chosen to highlight LEO, THE ROYAL CADET, a Canadian gem, for the second production in the Silver Jubilee Season. “LEO is a total delight” said Silva-Marin, “and I can think of nothing more fitting in our twenty-fifth season than to feature Canada’s very first musical comedy”. The cast will feature Cory O’Brien in the title role as Leo, a cadet at Kingston’s Royal Military College. O’Brien was heard as Strephon in TOT’s IOLANTHE and is well-known from performances at Stratford in CABARET, MY FAIR LADY and the Mirvish production of LORD OF THE RINGS. His sweetheart Nellie is soprano Kristen Galer in her TOT debut. Ms. Galer has appeared at Stratford in SCARLET PIMPERNEL and was Rosie in LORD OF THE RINGS. Gabrielle Prata will be Caroline and Robert Longo – a TOT favorite from PATIENCE and EARNEST, THE IMPORTANCE OF BEING – takes the role of the Commandant. Jeffrey Huard, conductor of the Mirvish hit SOUND OF MUSIC will conduct the orchestra and Silva-Marin directs.

Performed for the first time at Martin’s Opera House in Kingston in 1889, composer Oscar Telgmann filled LEO with delightful tunes, spirited chorus numbers, a soulful ballad for the heroine and a stirring anthem extolling the attractions of pumpkin pie. In this light-hearted musical about love and war, Leo is recruited by Commandant Hewett of the Royal Military College to fight the Zulus in Natal, Africa. Sadly parted from his sweetheart Nellie, he yearns for home, is wounded in battle and returns safely to the loving arms of his beloved, honored by Queen and country with the Victoria Cross.

LEO racked up more than 1,700 performances for a span of over 30 years and was ‘received with great enthusiasm’ in Ottawa, Guelph, Woodstock, Stratford, Utica, and Toronto’s Massey Hall. Though ‘one of the most brilliant, spectacular and refined operas before the public’, LEO’s stage career was cut short by a devastating flood in 1925 that damaged the sets, costumes and orchestra parts beyond repair. However, LEO lived on in memory and legend and after much research, Silva-Marin and TOT produced the first modern staging in 2001. John Greer valiantly reconstructed the orchestral score, a ‘grand finale’ was introduced, while the book and lyrics were edited by dramaturge Virginia Reh and Silva-Marin. Theatre lovers can once again surrender to the innocent charms of Leo and his beloved Nellie in this, Toronto Operetta Theatre’s Silver Anniversary year.

Single tickets are available and TOT’s budget priced FAMILY NIGHT OUT offers discounts of up to 50% for children and youth under 16 years of age. Call 416-366-7723, toll free at 1-800-708-6754 or online at www.stlc.com. Wheelchair accessible and close to public transit. Toronto Operetta Theatre is grateful for the support of Deutsche Presse (media sponsor), the Jackman Foundation, The Bedolfe Foundation, Toronto Marriott Downtown Eaton Centre, the Canada Council for the Arts, Toronto Arts Council and the Ontario Arts Council. The TOT Friends Campaign partners are HotHouse Café, Hotel Victoria, Hernando’s Hideaway, and Café Nicole.