First of a three part series 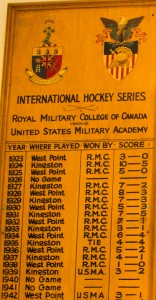 The game was cancelled in1926 – the fiftieth anniversary of RMC.

The cancellation was due to the death of 1833 William Lewis Campbell. The first year cadet was found dead in his room shot through the chest by his own rifle. This tragic event took place on a Monday evening just five days before the scheduled hockey game in Kingston.

The commandant of the day – 621 Brig. CF Constantine in consultation with his counterpart – Brigadier General, MB Stewart, Superintendent at USMA made the decision to cancell what would have been the fourth game of the series.

The series resumed and went on continuously for the next 13 years.

So, what did all this have to do with the hockey series? Because Canada was at ‘war’ and the USA was a ‘neutral’ country during the hockey seasons of 1940 and 1941 there were no games. However, interesting to note once America was in the war against both Japan and Germany – there was a game played at West Point in Feb 1942.

The officer cadet education / training program was stood down at RMC during the rest of the war and stood up again in 1948.

In total,17 games were played from 1923 until and including the 1942 war-time contest. RMC was the winner 14 times; there was one tie and USMA won twice.

During these early years the routine at both locations was very straight-forward. On arrival the visitors would meet-up usually with their immediate opposition. Opposing goalies shared the same quarters, defensemen and forwards the same.

Canadian and American officer cadets studied together, did drill together, ate together, and double-dated their feminine escorts. The visiting cadet at USMA was privileged to lead companies and platoons to the Dining Hall. When the game was in Kingston, RMC reciprocated in a like manner. In short, the host saw to his guest every need and supplied him with what comforts his barracks afforded.

At the game in West Point, one-half of the Corps cheered for Canada, and when the visit was returned the gentlemanly Canadians cheered for the Americans, each nationality having been carefully taught its rival’s yells and cheers.

Including the arrival of Jack Riley; ten years later Danny McLeod and much more.