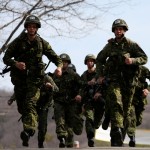 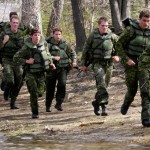 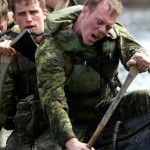 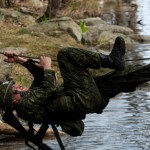 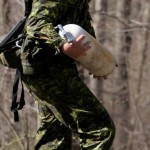 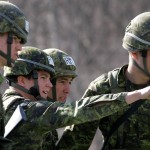 “To be winners again: vindicated. It was heartbreaking to work tirelessly and lose a title which RMC had held for 3 years. Winning affords such a sense of satisfaction, relief, and pride that was absent last year when we lost. Although the purest satisfaction comes due to the actual performance rather than the results, winning brings a sense of closure to the training and competition. Everything that went wrong last year worked out this year. To highlight, we won by 5 minutes this year. At the Leadership reaction cite, our last man and captain “LeBoot” jumped for home with 1 second to go. Each individual who did not complete the LRC would result in a 5 minute penalty. Thus you could say we won by a second!

All the training was worth it. Our social lives, school work, college duties, and varsity teams took a back bench to Sandhurst training but… anything to ‘beat the brits!'”

“The two cadets who are overseeing the tournament — John Natynczyk and Mike Stark — said they are ensuring that things have the same feel as in the 1870s, including bails of hay for a backstop and a table for the umpire to sit at…” 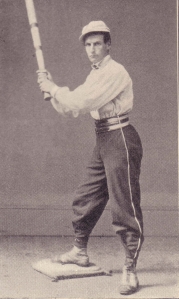 Long before men strapped blades to their shoes and hit a square puck with sticks in Kingston, they picked up a ball and a bat and played baseball.

It was a Saturday afternoon in 1875 — more than a decade before the first recorded game of hockey in Kingston — that a team of nine men representing the Limestone City took to a field in present-day City Park and prepared to face the best team in the country, the Guelph Maple Leafs.

The game was a major test for the team that had only been together for three years and those who came to the ball park that day witnessed the first great baseball game in Kingston’s history, maybe the greatest game ever played locally.

Next week, cadets from Royal Military College, residents and teams from outside the city will take to another field and play the game the way it was played more than 130 years ago. They will try to recapture that magic from a bygone era, a time when baseball was the game of the day to play.

“The tournament next week is the farewell project for the graduating class at RMC. Each year, cadets have to organize an event to build on the relationship the college has with the city and also give back to the community. This year, the cadets were presented the idea of staging a vintage baseball tournament, similar to the Historic Hockey Series run during Feb Fest.”

Military war games usually pit red against blue in the field, but a high-tech exercise underway at Royal Military College this week has black hatters sparring with green berets in the battlefield of cyberspace. Much more

As the 2008-09 school year comes to an end, we are once again proud to offer a variety of sports camps during the summer months. Information and brochures are currently available on-line for the following programs:

A fun filled adventure camp for active kids who like challenge and excitement.