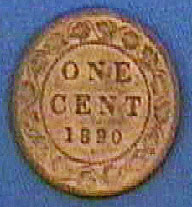 Approximately, 700 Officer Cadets of the Royal Military College of Canada participated in the Battle of the Atlantic Service of Remembrance and Copper Sunday services at local churches this past Sunday.

To commemorate the Battle of the Atlantic, approximately 100 cadets marched to the cenotaph at Navy Memorial Park at the Marine Museum of the Great Lakes on Ontario Street.

Approximately 600 cadets marched sharply from the college under sunny skies and ideal Spring weather conditions to Kingston City Hall where they were met by his worship, Mayor Harvey Rosen.

Ex cadets and most e-Veritas readers are aware that “Copper Sunday” was established as a sharing tradition circa 1880 at St. Andrew’s Presbyterian Church where RMC cadets first took handfuls of copper pennies, throwing them towards the offering plate to make as much noise as they could.

Word has it that the 129 year old tradition was alive and well this year although gone was the boisterous racket of the earlier years: 2009 cadets poured their accumulated pennies into the collection plates from military-issued black socks with precision and accuracy.

It was apparent that the clergy and other church goers appreciated the presence of the RMC officer cadets; this tradition has become more than ever – a big part of the college’s identity with Kingston residents. Four members of the RMCYC travelled to USNA recently to compete in the Intrepid Trophy Sailing Regatta. The regatta took place on the Chesapeake Bay in Colgate 26 Keelboats. The regatta consisted of a full round robin 11 flights being sailed of 8 matches between all the 12 teams participating. RMC competed against The United States Naval Academy , The United States Coast Guard Academy, The United States Merchant Marine Academy, the State University of New York Maritime University, and Michigan State University to name a few. While RMC was not victorious the past weekend it was a remarkable showing by the team for its inaugural participation in the Intrepid Trophy. USNA extended its invite for RMC to return next year and looks forward to competing against RMC on the water again. 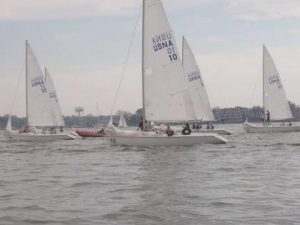 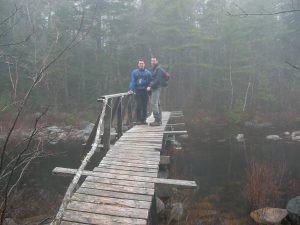 On April 24th, four cadets from the RMC outdoor club travelled to Halifax to participate in the 2009 Eco-Endurance Challenge. OCdt Long and McSheffrey formed team ‘Artoo-Detour’ and OCdt McInnis and Bertoncini were ‘The Wanderers’. The event was a 24 hour orienteering race organized by the Halifax Regional Search and Rescue. This year saw over 300 participants taking part in the race, in several different categories.

The course was an area over 200 square kilometres, with 60 small markers scattered in trees, on hills, over streams, and against cliffs. Each marker had an assigned point value and the goal was to accumulate the most points. Navigation was done with a map and compass, but finding the markers proved challenging given the 1:50,000 scale on the map. Team Artoo-Detour covered over 55 kilometres during the race and scored 5300 points, coming second in the Armed Forces division, while The Wanderers placed fourth with 4000 points. Both teams found it challenging dealing with the long distances and the unpredictable weather. The first eight hours were warm and sunny, resulting in sunburns for everyone, while at night a 20 degree drop in temperature and one incident falling into a pond meant that it became difficult to stay focused and keep going. Nonetheless both teams enjoyed themselves and found the race to be a great experience and a nice end to exams and the school year. 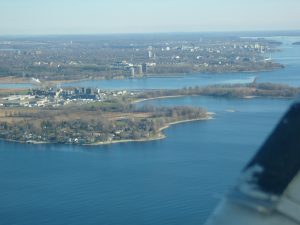 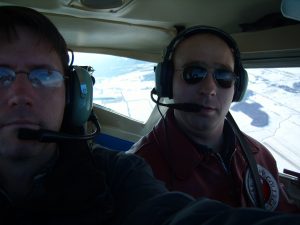 This past Saturday 25 April, 24 cadets from the RMC Flying Club took to the skies at the club’s bi-annual Fly Day. The purpose of the Fly Day is to allow those who might otherwise not have a chance to fly the opportunity to experience the joys of powered flight.Using the aircraft from Ontario Fun Flyers at Kingston’s Norman Rogers Airport, 8 pilots from the club flew 16 passengers over 4 flights with a Cessna-172 and Cessna-152. The weather for the day was beautiful and made for a great day of flying. Participants were taken around the skies and shown the many sites of Kingston and the surrounding area from an aerial view point. Some of the sites visited include Wolfe Island, Kingston Penitentiary, Queens University, CFB Kingston, Fort Henry, the 1000 Islands, and of course what flight around Kingston would be complete without flying over the beautiful campus of RMC.Immediately following the Fly Day, was the Flying Club’s first annual Plane Wash and Year-End BBQ. To show the club’s appreciation to Ontario Fun Flyer’s for letting us use their aircraft throughout the year and for all their support, several club members came out to wash and clean the planes. Once the planes were all clean and shiny the grill was fired up and club members and OFF staff alike enjoyed a meal of barbecued burgers and hot dogs to celebrate the end of another year of successful flying club activities. It is hoped that the club will continue to thrive and grow next year under the direction of it’s new president, OCdt. Ross Harbottle. 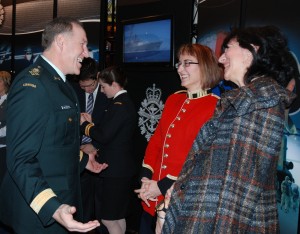 “Being invited to the luncheon with the Chief of Defense Staff, at the Rideau Club of Ottawa, was a great privilege. It was fabulous, to say the least. Both myself and my mother were cordially greeted by the General and we had the opportunity to address him, which was a worthwhile experience. The enthusiastic, smart and, at times, funny speech that the CDS gave during the event touched upon different issues that the CF are facing and on the ways we can contribute to make this organization the most efficient possible.”

The soon to be Personnel Selection Officer will be receiving an Honours Degree in Psychology next week and is headed to CFB Borden for On Job Training prior to receiving formal training. The Dukić family arrived in Canada from war torn Bosnia in 1995. The family currently resides in Gatineau, Quebec across the river from Ottawa.

“Overall, we are honoured to have had the opportunity to be present at this unique event.”

While it may be safe to say that Royal Military College has not been spoiled by athletic success over the years, there is one competition they are proving to all but own.

A team from the college has won the Sandhurst Military Skills Competition, one of the toughest such contests in the world, for the fourth time in five years.

Held earlier this month, the team got the best of the host U. S. Military Academy, Britain’s military academy — after which the competition is named — and other service academies and universities from around the world.

The gruelling two-day exercise, held this year at West Point, N. Y., includes marksmanship, assault boat competitions, rappelling, orienteering and other team challenges under the umbrella of soldiers’ common tasks, all done by competitors in boots, full kit and rifle over a rugged seven-mile course.

Described as the fittest cadets in the college by far, RMC finished the course in four hours, 29 minutes, more than five minutes ahead of the second-place U. S. Military Academy.

The team presented the sword that is the competition’s trophy to the college at a parade yesterday. It will hang in a prominent area, near the college colours.

“Because this is a military skills competition, this matters a great deal more than a basketball game, for example. This goes to the core of what we do,” said Lt.-Col. Tony O’Keeffe, the college’s director of cadets, “and just like in other athletics, we were competing against schools much bigger than we were.

“I looked out from the reviewing stand into a sea of American [camouflage uniforms] and right in the middle of it was this little sliver of green Canadian [uniforms]. Those were the odds we were up against.”

The team had been training daily for the competition since returning from Christmas break in January, and knew what they were up against after a team leader had been allowed to scout the course, which changes every year. 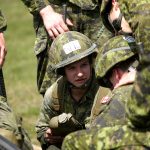 “We prepared for everything,” stressed fourth-year cadet Eve Boyce, a member of the 15-person team.

“Everything down to the type of knot used in a rope bridge and the distance between them had been practised.”Designed as a thinking and team-building exercise rather than a ruck march up the side of a mountain at double time, the competition challenged the teams to work out solutions to problems on the fly — for example, manoeuvring across a field of oil drums using boards too short to span the distance, without ever touching the ground.

“It was a tough course,” said second-year cadet Charles Gallant. “It’s a lot of running, and because of the terrain at West Point, it’s like you’re running straight uphill for the whole time.”

The competition is seen as an extremely big deal by the U. S. military, each arm of which maintains its own service academy. For a Canadian team to once again take bragging rights and the ceremonial sword was a coup.

O’Keeffe gave the credit to the team’s training regimen and attitude. The cadets had nothing approaching the training facilities afforded the U. S. schools, most of whose physical education departments dwarf the athletic complexes of top-flight Canadian universities, but they proved to be the fittest and most determined entrants. 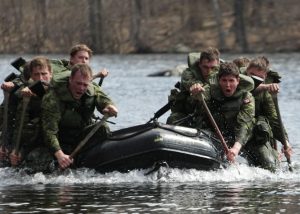 “It was their fitness and the training that they put in that made the difference and there was also a Canadian attitude that came into play,” he said of the team.

“It’s the attitude that we don’t need a million-dollar gym. If we have some sandbags and a few weighted cans of water and a dirt track to train on, that’s all we need and leave it to us, we’ll get it done. They got it done, and we really got a lot out of these young people.” Typically the fourth year class project is the fourth year softball tournament, which is held over the weekend after exams. This is always an extremely popular event within the wing. The only problem is that it did not completely achieve the aim of getting RMC out into the community. OCdt John Natynczyk and OCdt Michael Stark, the two OPI’s of the class project, organized a Vintage Baseball tournament on the side of fourth year softball tournament. Vintage Baseball is baseball played using the rules, equipment, uniforms and terminology of the late nineteenth century. The fields used for the games do not have to be flat, and can even have a tree or two on them. The players do not wear gloves, and the ball is allowed to bounce once before being caught. This year the RMC team was made completely of fourth year OCdts. The tournament was meant to host Sackets Harbour and the City of Kingston, but due to illness and scheduling conflicts for the American team only a few American players were able to show up. This event was held May 2nd 2009 in Navy bay where RMC played two nine inning games against the Kingston St. Lawrence Vintage Baseball team. RMC won both games with the first game coming down to the last inning and RMC pulling out a 14-13 victory. The proceeds of both tournaments are being donated to P.R.O. Kids Kingston, a local charity providing kids with equipment and opportunities for sports and activities. Hopefully in the future we can see more vintage teams come to RMC, and maybe even send the RMC team to tournaments elsewhere.