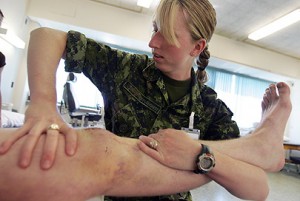 When did you arrive at RMC?

After graduating from Dalhousie University, I was posted to CFB Kingston. I have been working with RMC Cadets ever since. This past October, our clinic responded to the need for a Physiotherapy position specifically for RMC Varsity athletes, and in November 2008, I started working 2 days a week in the clinic located in the gym for Varsity athletes only. In January 2009, I became full time at RMC and am currently working here until the end of the semester, and then I will move back up to the clinic on base for the summer months to work with the rest of CFB Kingston’s military population.

What are your main duties?

My main duties are to return athletes back to their sport as quickly as I can during their season. When the teams are finished competing at the end of the winter semester, my focus then shifts to making these athletes strong and healthy for their summer military training.

What is your chain-of-command?

I am a member of 33 CF H Svcs C. My direct CoC is Captain Trudel, the Team Leader of the Physiotherapy Department. He in turn is responsible to the Diagnostic and Therapeutic Services Manager who is directly under the Commanding Officer.

What team(s) do you mainly work with at RMC?

I was one of the Athletic Trainer’s for the RMC Varsity Hockey Team during the 2008-2009 season. My role as the Physiotherapist for all varsity athletes has allowed me the opportunity to work closely with all athletes from the 11 varsity teams at RMC.

Are there any special incidents that stick out in your mind -over the past season(s)?

I would have to say one of our first hockey games of the season sticks out in my mind. Our starting goalie was kicked out of the game and our back up goalie was injured on the second shot that he took when he went in to replace our starter. Coach Shell had nothing else to do but dress one of the forwards as the goalie. We ended up winning the game in a shut-out!

What sport is the toughest to keep their players in the lineup?

From my own personal experience, I would have to say hockey and women’s basketball appear to be the toughest sports to keep players in the lineup.

What are the biggest challenges working with RMC athletes?

Their time is very precious. The athletes have to find a balance between academics, military training and varsity, and sometimes this can be a very difficult obstacle to overcome.

What is the most rewarding working with RMC athletes?

Watching the excitement of a player get back into playing the sport they love after suffering an injury.

What are your future plans in regards to your profession?

Injuries on the way to war – TheStar.com Article