RMC Athletics and The Royal Military College of Canada is proud to host the 40th Annual RMC Fencing Team Invitational Saturday October 31, 2009 and Sunday November 1, 2009 at the Kingston Military Community Sports Centre. This tournament shall be run in accordance with FIE and CFF rules and regulations, subject to the interpretation of the Directoire Technique.

What’s Happening At RMC – for these 6?  For videos please click on thumbnails below. 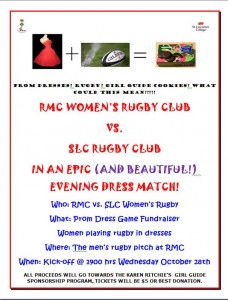 14491 Colonel Karen Ritchie, class of ‘85, who died last year in a car accident, was an inspiring, caring woman who had strong beliefs about the importance of empowering Canadian girls and helping them to find their voice.

Karen was a role model for girls and women in her professional life. She was in the first class of 32 women accepted to RMC in 1980 when she was only 17. She graduated from RMC with a Bachelor of Engineering in Mechanical Engineering and later continued her education by earning a Masters degree in Integrated Logistic Support at Virginia Polytechnic and State University. Her military career steadily advanced with her promotion, at a young age, to the rank of Colonel. She also served as Deputy Chair of the Committee on Women in the NATO Forces. At the time of her death she was the Commander of 5 Area Support Group.

Karen was also a life-long supporter of the Girl Guide movement and a proud member of Girl Guides of Canada. As a senior ranking officer in the military Karen was regularly deployed to areas such as Bosnia, Germany and the Arabian Gulf, but her connection to Guiding remained constant. As she noted recently in an interview for a profile, “I move regularly with the Army, but I can always find a Guiding community wherever I live or work. There is a sisterhood in Guiding no matter where you are in the world. Guiding is the constant in my life. Honestly I could not imagine me, Karen Ritchie, without GGC.”

Karen lent her skills, leadership and passion to several areas of Guiding, including being a Unit Guider, working on the Planning Committee for Guiding Mosaic 2006 and serving on the Membership Recruitment Task Force. At the time of her death, Karen was a Board Member for the organization.

Karen will be remembered for her exceptional contributions to both GGC and the Canadian Forces.

In memory of Karen, members of the first group of Lady Cadets and the women of her graduating class have banded together to set up a “First 32″ camp fund in order to help send 32 girls to GGC’s upcoming Guiding Mosaic 2010, an event very dear to Karen’s heart and one in which she had been looking forward to taking part.. The cost to send one girl to camp is $900.00.