Announcement on Director of Cadets Position/

Announcement on Director of Cadets Position/

Annonce sur la position du Directeur des élèves-officiers
The position of Director of Cadets has been in existence, in some form, since the opening of the College in 1876 when it was originally filled by Captain Joseph Ridout. Following his departure, the position has been filled by Majors and Lieutenant-Colonels and, most recently, officers at the rank of Colonel. Following in the footsteps of his esteemed predecessors in 2006, Col Bernard Ouellette has done a tremendous job in the position. In a CF-wide effort to refine the number of officers at most senior ranks, the DCdts position will be one of nearly 100 Colonel positions to revert, in 2008, to Lieutenant-Colonel rank.
This being the case, I am now announcing that LCol Tony O’Keeffe will take over the office of DCdts following Col Ouellette’s departure this summer, while Cdr Darren Rich will take over as my Chief of Staff. Until formal hand-overs take place in APS 08, all named officers will remain in place. Informal hand-overs can commence at the convenience of those mentioned above, all of whom have my deepest appreciation for their efforts.

It was named in honour of Joseph and Molly Brant. Chief Joseph Brant was
a Mohawk leader and British military officer of the American Revolution.

Over the past week, students and staff from RMC have undertaken a significant learning experience: Ex Souvenir 2008, otherwise known as the College’s battlefield tour. The tour followed a similar itinerary to that of previous years, visiting the major battlefields of Northern France and into Belgium. Particular points of interest ranged from World War I areas such as Vimy Ridge and Passchndaele to the site of the Juno Beach landings on D Day. The variety of spots visited yielded many lessons in turn.

The military historians on the trip shared their indepth knowledge and imparted valuable lessons to officers in training. Lcol Delaney and Major Boire provided examples of problems of ground related to fire and movement. One of the most vivid of these is the problem of the reverse slope encountered by Canadian troops at places such as Verrieres Ridge. Being able to see the ground on which key battles were fought allowed the group to achieve a more robust understanding of the tactical problems soldiers of the two world wars faced in the field. Places like Passchendaele, Verrieres, and Vimy drove home Dr Hennessy’s point that “Ground must be experienced to develop Coup D’oeil [grasp of the eye].” Complementing the infantry and armoured experience of Lcol Delaney and Major Boire, the perspectives of the Canadian Engineers was presented by Col (Ret’d) Dawe and Dr. David Harries. This gave the group a new point of view on the problems faced when mounting offensive operations.

We learned aspects of Canadian war history that are often overlooked. Dr Finan provided a detailed and provocative description of bagpipes and the Canadian Army as well as the valiant actions of Private Richardson at Regina Trench. Dr Lukits also reminded the tour of how acts of remembrance have been given form and subsance through literature. It was quite intriguing to hear readings of war poetry and excerpts from memoirs as these often overlooked works play an important role in shaping our national concept of remembrance.

Lessons learned from the trip also include insight into other cultures. For a good number of cadets, this was their first visit to Europe. The new and exciting experiences, ranging from the intense strength of French coffee to the relaxed pace of European life, served to highlight the need to take into account cultural differences. All cadets have benefited from this aspect of the tour, and it is sure to be of great use to them if they find themselves working in multinational coalitions in the future.

All of those involved with the tour found it an extremely moving experience. Not only were we able to see the ground where so many have died for Canada, but we put names to the numbers of the dead through visits to numerous cemeteries. While the importance of remembrance was firmly entrenched in the minds of those who went on the tour, I am sure no one will forget the moment they heard Dr. Finan’s bagpipes play as they walked the grounds of Dieppe cemetery.

Overall the trip was an overwhelming success. All involved learned a variety of lessons, ranging from the importance of ground in tactics to the way we pay tribute to our war dead. These lessons will be extremely useful for the cadets in both their personal lives and when the time comes for them to command troops. As ex-cadets you should be proud. The RMC Club Foundation has made the trip possible by a generous donation. Without the Foundation’s help the cadets may never have learned what they did. This is why I am proud to report Ex Souvenir 2008 a complete success.

(Click..click on photo for larger view) 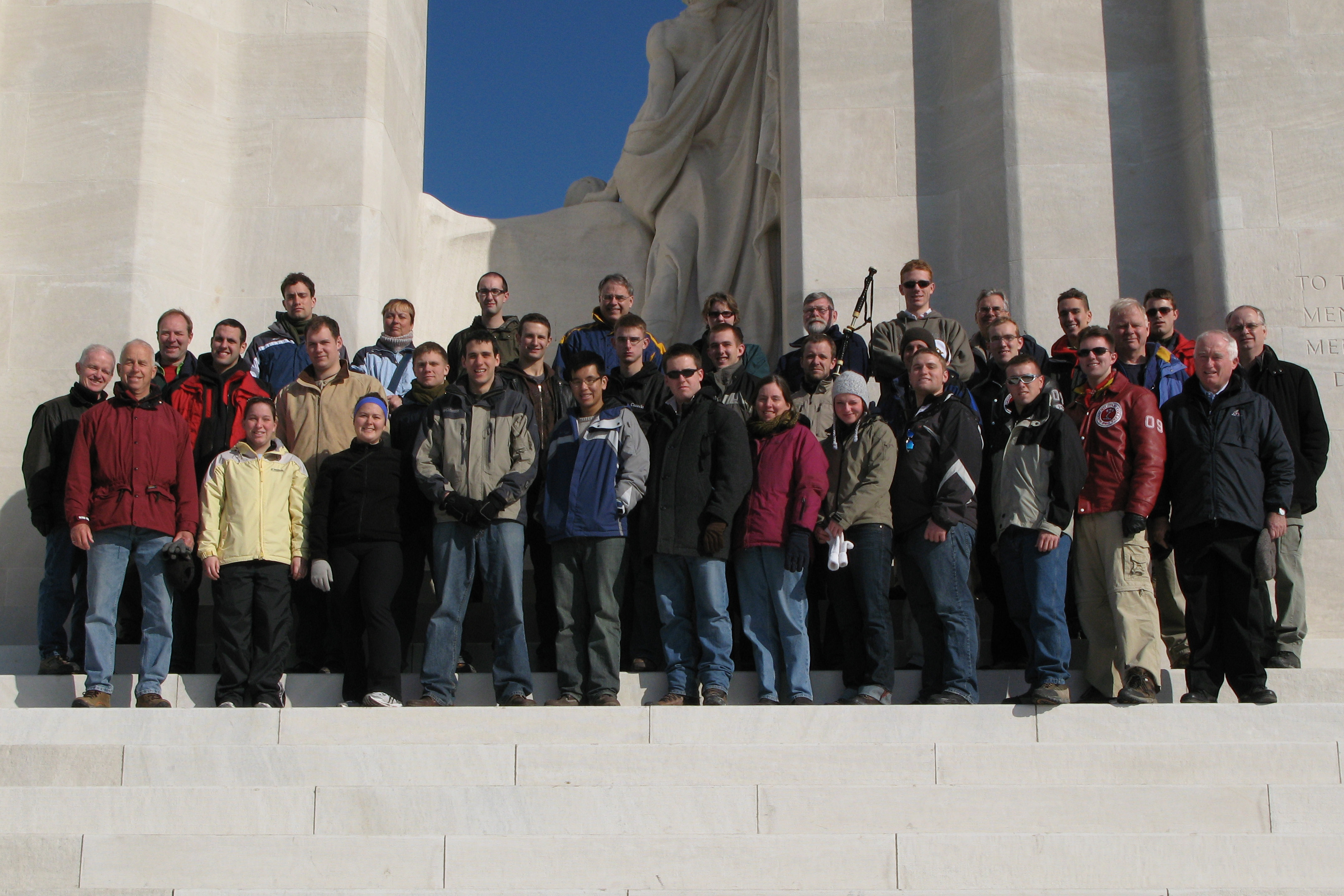