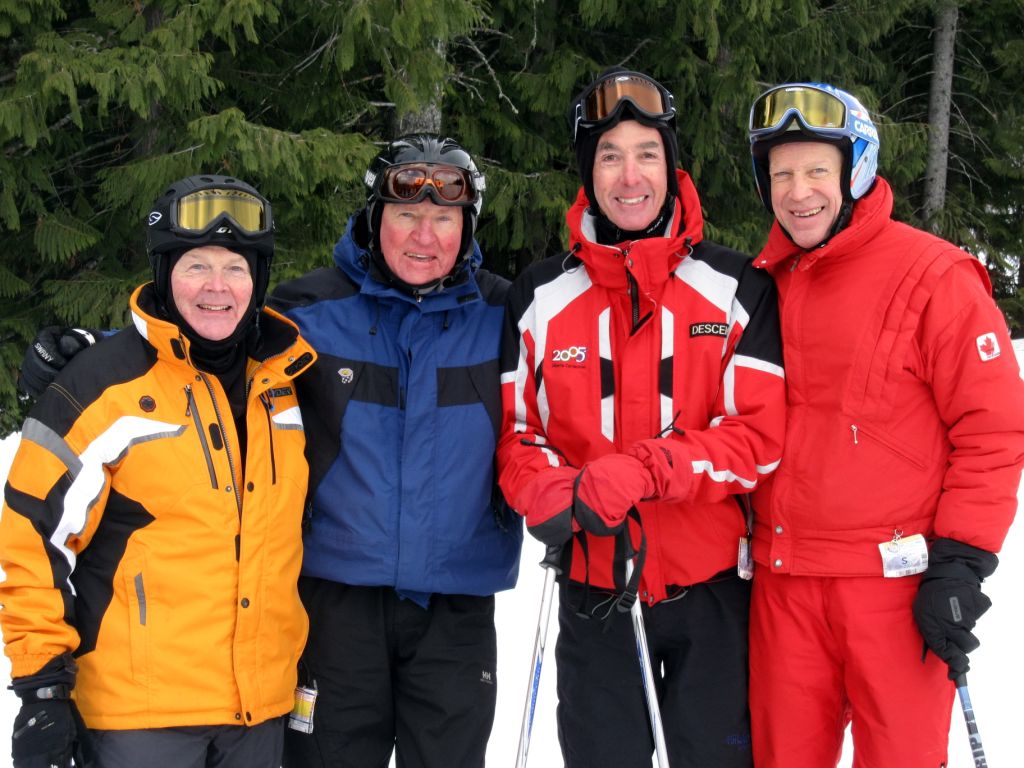 It is critical that a few ex-cadets are out on the ski hills from time to time to help boost the humours of those who must labour in more difficult terrain.

This photo demonstrates that an intrepid team of snow explorers were able once again to disprove rumours
of missing ex-cadets. Clements and Apedaile of Class of 63, accompanied by their mascot,

Newson of Class of 70, finally found Leishman, AKA abominable Snowman, carving a turn under the avalanche slopes at Fernie, BC.

Chuck, who is a certified snowboard and alpine ski teacher is also a certified alpine race coach.

He took the visitors in hand, helped them through their morning race and showed them the mountain in great style.

Race irregularities make it moot to report results, but it seems that Clements, for the first time, topped the group list.

With hundreds of projects on the go in the Materiel Group and DND/CF as a whole, project management (PM) is big business. To keep up with best PM practices, the Mat Group launched the Project Management Professional Development Seminars earlier this year. This initiative is helping project personnel across the department keep up with the best practices, lessons learned and current issues affecting project management. Already three seminars have been held since the official launch last January 2008, the latest taking place on October 27 at the R.C.A.F. Officers’ Mess in Ottawa. “The purpose of these seminars is to share lessons learned and raise awareness of project management issues in the department,” said one of the organizers, Carol Brett, senior manager, project management, in the Directorate of Materiel Policy and Procedures (DMPP) in DGMSSC. “Experienced project managers and senior project officers are asked to give presentations on a range of topics relevant to business processes such as risk management, requirements management and performance management.”

About 140 project management personnel attended the day-long seminar which featured a variety of critical topics including the project approval process, the United Kingdom model for risk management on service contracts, and lessons learned to date from the Materiel Acquisition and Support Information System (MASIS) project. “Educational seminars are an excellent forum for communicating best practices to project management personnel,” said Ms Brett. “Everyone benefits by sharing experiences and lessons learned.” Organizers of the seminars are encouraged by the positive response from attendees during the first year. “The feedback from all the seminars has been extremely positive as the majority of the attendees appreciate the opportunity to network and learn from each other,” said Ms Brett. The next Project Management Professional Development Seminar is tentatively scheduled for February 4, 2009. Further details about this upcoming seminar will be posted at a later date on the ADM (Mat) website.

ADM (Mat) Dan Ross opened the October 27 Project Management Professional Development seminar that was attended by 140 project management personnel. He stressed the importance of these seminars and his continued support for this initiative.

10419 COS (Mat) David “Jake” V. Jacobson OMM CD (CMR RMC 1975) closed the seminar with an overview of the day’s presentations and how they can benefit the project management community at DND/CF.  David “Jake” Jacobson has been Chief of Staff (Materiel) in Ottawa since July 2007. He is a regular conduit of information, advice and guidance to ADM (Mat) as well as other Group Principals/Commanders and ultimately the Deputy Minister (DM) and Chief of the Defence Staff (CDS) concerning the effective and efficient delivery of all materiel acquisition and support services. Jake was selected at the age of 16 to attend the college Militaire Royale in St. Jean, Québec. Appointed Cadet Wing Commander and recipient of the Sword of Honour, Jake graduated from the Royal Military College in Kingston, Ontario in 1975 in Honours Mathematics & Physics. Jake was awarded a Rhodes Scholarship (Ontario and Magdalen), pursuing undergraduate and postgraduate studies in Theoretical Physics and Astrophysics, and earning University Half Blues in Gymnastics and Ice Hockey at Oxford University from 1975 to 1978. Jake rejoined the Department of National Defence in July 2007, taking up his current appointment as the Chief of Staff (Materiel Group).Jake’s wife and closest partner is Suzanne (née Poole) of Longueuil, Québec, the proud mother of their three daughters: Jennifer (and husband David Mackintosh and their two sons Alexander and Nathan), Nicola and Michelle Avrïl. 13143 Brigadier-Gen Mark E McQuillan CD (RMC 1981) assumed the responsibilities of Deputy Chief of Staff for the Materiel Group in 2007. In 1981 he graduated from the Royal Military College, Kingston, Ontario, with a Bachelor of Arts Degree (Honours) in Economics and Commerce. BGen McQuillan is a graduate of the Canadian Forces Command & Staff College (1994) and the National Defense University’s Industrial
College of the Armed Forces (2005). BGen McQuillan and his wife, Diane, have two grown children, Alison and Kyle. 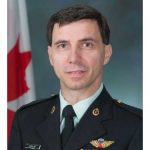