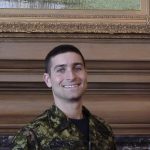 Captain Isaac Aaron Goldberg, from Montreal (Quebec), graduated from RMC in 2004. He came back to RMC in July 2008 as 2 Squadron Commander (Lasalle).

A 10 year veteran of the Canadian Forces, he is an Air Force Aerospace Engineering Officer. The primary functions of AERE officers include all aspects of the engineering, maintenance and management of military aircraft (Air Force, Army or Navy) and all of their support equipment and facilities during military operations, in peacetime or at war. Aerospace Engineering officers manage and supervise the personnel and resources required for the servicing, inspection and repair of aircraft.

Proud of his Squadron, he is quick to point out that Lasalle currently sits in 1st place overall for Commandant’s Cup competition – a much sought after trophy by all RMC squadrons.

As a Squadron Commander, there is an entire host of secondary duties that all of them must carry out on top of mentoring the cadets of their own squadron. In his case, he has been selected as the physical fitness trainer for the high profile – Sandhurst Military Competition team – a group of RMC cadets who compete at the United States Military Academy at West Point annually (in April) in a military skills forum. Traditionally RMC does extremely well in this gruelling and highly competitive international test of military skills competition including the best from Sanhurst; USMA; USNA; and USAFA. Like everything he does, Captain Goldberg takes on the “Sandhurst challenge” with enthusiasm and conviction. “I constantly remind myself that it has been done before – and can I do it better?

Asked what he likes most about being a Squadron Commander: ” I love the daily interaction with the cadets. I am able to shape their way of thinking about a variety of subjects and their attitudes towards all things RMC. I am incredibly passionate about the success of my cadets, and love it when they burst into my office declaring success with respect to one of the components of the College – it becomes our own personal victory that we share.”

What does he consider the most challenging aspect of his position? ” I spend incredibly long hours at the office, at varsity games, at intramural games, mentoring and coaching the cadets. I firmly believe that in order to be a good squadron commander you have to be here constantly, working as hard as you can. To be a great squadron commander, you have to perform all of the above passionately and resolve to influence your cadets positively every single day.”
“It is my greatest hope that my cadets remember me as a dedicated and loyal squadron commander. I want them to think back and recall with fondness their quality of life because of my dedication.”

Currently out of the “operational” circuit, he takes great pride in what he accomplished while on deployment: “I loved being deployed overseas performing maintenance on the C130 Hercules. It was incredibly challenging, but very rewarding every day. There is no feeling like seeing an aircraft full of troops on their way to the fight, knowing that your work all throughout the night made the difference between mission success and failure. Of course, we achieved a mission sortie rate of 100% during my tenure as Aircraft Maintenance Officer – owing a great deal to my skilful technicians.”

Not content to just cruise along, he seeks out opportunities to further develop as an officer. He has “been selected to do post graduate studies in the field of reliability, maintainability and systems analysis at Rutgers University.” 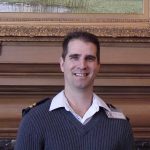 Captain John Wood, from Kenora (Ontario), has been the 8 Squadron Commander (Mackenzie) at RMC since August 2008.

He has been in the Canadian Forces for just over 8 years and serves as a Military Police Officer.  Military Police Officers routinely function within the civilian criminal and military justice systems, and are recognised as peace officers in the Criminal Code of Canada. They provide leadership and professional direction to Military Police members, and manage available resources and equipment.

Working at RMC provides a different set of challenges when compared to working in other units of the CF: “The hardest part of this job is not having an end state. The development of a CF officer never truly ends, in the two years one spends here as a Sqn Comd you never see the finished product of all your hard work and long hours. Perhaps the reward comes in future years as you hear of your former cadets succeeding in their respective careers and distinguishing themselves on deployments.”

Despite the unique challenges of being a Squadron Commander, “working with the cadets has to be the highlight of working at RMC.”

Conscious of his mission at RMC, his objective as a Squadron Commander is to help develop and foster good leadership qualities within his cadets. He is not concerned if the cadets remember him at all: “I would rather they remember something I passed on that will help them be a better officer.”

Asked what his favorite posting was before coming to RMC: “I have enjoyed all of my posting prior to RMC. If I had to pick one it would be the Joint Headquarters. For those not familiar with the JHQ, it is a joint high-readiness rapidly deployable operational-level integrated command-and-control capability for assigned tasks, such as Non-Combatant Evacuation Operations (NEOs), Disaster Assistance Response, Theatre Activation, and Operational Reconnaissance. The expertise, professionalism and experience among the staff greatly helped me develop as an officer. In addition I joined the CF to deploy and the JHQ provided that experience.”

Where does he see himself once his tour at RMC is done? “I would like to be posted to the National Counter Intelligence Unit (NCIU).” 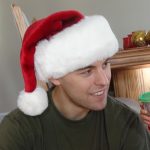 Captain Desmond James Stewart, from Wawa (Ontario), has been 11 Squadron Commander at RMC since Summer 2007. In addition to his regular Squadron Commander duties, he was assigned the new ALOY (Aboriginal Leadership Opportunity Year) program in 2008.

He joined the Canadian Forces in 2001 as a DEO, and serves as a Communications and Electronics Engineering Officer (CELE). The primary functions of CELE officers involve a wide range of tasks critical to the command, control and electronic security of the Canadian Forces in general, and the Air Force in particular. This includes the provision of telecommunications and information management services supporting our operations in Canada and abroad.

He relishes the opportunity to impart knowledge and mentor young officer cadets : “The interaction with the cadets and seeing how they learn to deal with challenging situations ‘real world’ situations is very rewarding. This is the only job I’ve had that is almost purely mentoring; we give them advice and see what they come up with. More often than not we are pleasantly surprised with their creativeness.”

When asked what the most difficult part of his job is: “Obviously this position is very demanding and requires tremendous personal and family sacrifice of time and effort given the hours that cadets are available. However, I think the toughest task is yet to come; with all the hard work that we have done to mentor these cadets we will likely not see most of them graduate since we have such short postings.”

How would he like to be remembered by cadets? “Involved”. This is William Stewart, born on 18 Aug 07 roughly the same time 11 Sqn was created. The Sqn always seem happier to see William than his father.  William is getting ready for the upcoming “Winter Sports day”.

His favourite posting before coming to RMC was with 76 Comm Gp Ottawa: “I was the Line Troop Comd and they tended to keep life interesting!”

He expects to be at RMC for just another few years; post RMC he “will be looking for a posting to a Wing for career and professional development.” 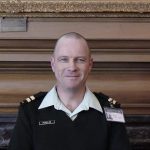 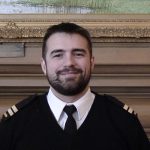 Lieutenant (N) Boucher, from Fredericton (New Brunswick), graduated from RMC in 2004 and came back to RMC as 13 Squadron Commander (Joliette) during the summer of 2008.

He has been in the Canadian Forces for nearly 10 years and serves is a Marine Systems Engineering Officer. Marine Systems Engineers are responsible for the readiness, operation and maintenance of propulsion and ancillary systems, power generation and distribution, auxiliary systems, ship’s service systems, ship and machinery control systems, hull structure, ship’s stability, damage control, and the integration of these systems.

He enjoys his current posting at RMC and feels that “working with the Ocdts” is definitely the most rewarding part of his job.

Toughest part of his job as Squadron Commander? “The mounds of Admin produced by 74 Ocdts”. The more time spent doing administrative work the less time he can interact with and mentor the officer cadets.

Asked how he would like to be remembered by the officer cadets “As being fair to them”.

Although he enjoys the opportunity to mentor future officers while further developing his own leadership skills, he is an action oriented person and considers “serving in HMCS Iroquois and sailing for SNMG 1 deployment in Europe and Africa” as his best posting so far.

Where would he like to go after RMC? Nowhere inland! He wants to be posted back to the coast and get back to sea.