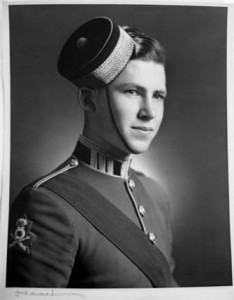 * When I graduated from Royal Military College in 1941, I received the Governor General’s Gold Medal.

* Yosef Karsh, who took photos of Royal Military College officer cadets as a method of supporting his early career, took my graduation photograph.

* My ongoing passion was to learn more about quantum mechanics, relativity and cosmology.

* In regard to reactor physics and radiation shielding, I was involved with the building of the CANDU Reactor.

* I raised funds for the Schizophrenia Society [Oakville]

Dr. Whittier is one of the (many) ex-cadets who was photographed by Josef Karsh. Since Karsh photographed cadets in the 30s-40s, I suspect that many alumni and families have Karsh`s photos.