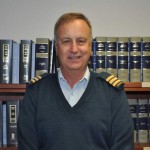 e-veritas: Which Military College(s) did you attend?

12339 LCol Randy Smith: I attended Royal Roads Military College from 1975-77, in the same class as 12320 General Walter Natynczyk. I opted to attend College Militaire Royal from 1977-79, to learn French and to earn a practical degree so I studied for a Bachelor’s Degree in Business Administration.

Since I attended Military College under the RETP program, I had no commitment to join the Regular Force. Nevertheless, I joined the Regular Force as a supply officer (logistics) and was posted to Shilo where I stayed for a year until attending McGill Law.

e-veritas: What were your main extracurricular activities while at Military College?

12339 LCol Randy Smith: Although I played sports, I was not a jock. I focused on doing well academically and on trying to stay out of trouble. I recall that my main extracurricular activity while at CMR was trying to get caught up on sleep, often during the period when I should have been playing sports. In my last year at CMR, I served as Cadet Flight Leader for 4 Squadron (35 preps), which was a challenging task.

e-veritas: Did defending yourself in a college code of conduct case inspire your JAG career?

12339 LCol Randy Smith: Yes. While in first year, I was pressing my pants in the “ironing room” at RRMC, my DND ID card fell out and was later found on the floor by a third year officer cadet. A cadet-run system enforces transgressions of the College Code of Conduct, with protocols in place that detail punishments. I defended myself with an argument pointing out extenuating circumstances existed, which were that I was being medicated due to wisdom teeth extraction when I lost the ID card, and that I didn’t have my wits about me. I was pleased that this defense worked and I was found not guilty under the college code of conduct. However, I did not fare so well in respect of other college charges. I was later inspired to apply to law school by an undergraduate military law course that I took at CMR, Business Law, taught by a lawyer by the name of Denis Dion, who sadly now has passed. He felt that I had what it takes to become a lawyer and he strongly encouraged me to apply to McGill Law.

e-veritas: What is your best memory from Military College?

12339 LCol Randy Smith: Some of my best memories are of skylarks at Royal Roads. Some of those skylarks will not be mentioned. I recall complicated schemes to “liberate” Squadron Flags. We also “liberated” pies out of the College kitchen. One time, we filled the Cadet Flight Leader’s room with crumpled up paper. The skylarks were excellent for morale. Attending Military College was the most incredible challenge of my life. I appreciate having had the opportunity to achieve success in the physical, military, academic and language pillars. The cadets I attended College with have become friends for life. When you are placed in such a challenging environment, you really get to know each other’s strengths and weaknesses, and pull together as a team with the aim to help everyone be successful. I know that I will never again have an opportunity to experience this. It was like doing “Survivor” for 4 years as opposed to 30 days or so.

e-veritas: What university studies have you undergone since CMR? Where did you article?

12339 LCol Randy Smith: I transferred to the Reserves in 1980. I completed a four year civil/common law program at McGill in 1984. While attending law school, I served as a Logistics Officer in the Air Reserves; 712 Communication Squadron and 2 Field Engineer Regiment, in Montreal, Winnipeg, and Wainwright. I articled in my hometown, Georgetown, Ontario at Helson, Kogan & Ashbee, then completed the Bar Admission Course in Toronto. I taught in Borden at the Supply Officer Training Company while waiting to be called to the Law Society of Upper Canada. When I was selected as a JAG Officer, I transferred back to the Regular Force. I earned a Master of Laws at the US Army JAG School in Charlottesville 1991-92. I completed Canadian Forces Staff College in 1997. My area of practice has mainly been in administrative and personnel law. 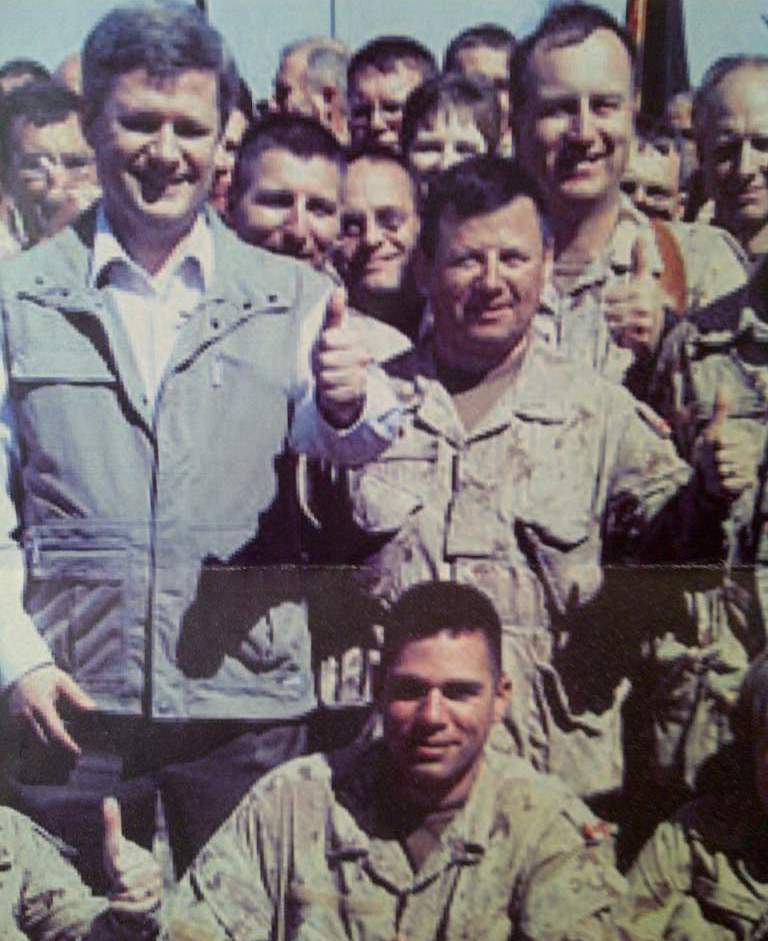 e-veritas: You have also done operational deployments as a JAG officer?

12339 LCol Randy Smith: In 2006, I deployed to Afghanistan as Legal Advisor with the National Command Element at KAF. I was the advisor to BGen. (Now MGen) David Fraser, who was the commander of the Multinational Brigade for Regional Command South in Afghanistan’s southern provinces in 2006. I was indeed fortunate to serve for MGen Fraser as his senior legal advisor on Canadian legal matters; he was a real leader and a gentleman. I later presented a paper based on my experience on the Rule of Law in Afghanistan “Law, reality on the ground, and the “no-man’s land” in between” at the Canadian Council on International Law 35th Annual Conference: Individuals, States and Organizations (Oct 26th, 2006).

e-veritas: You returned to develop curriculum and teach law at RMC from 2000-2.

12339 LCol Randy Smith: In 2000, I was posted to the Office of Military Legal Education or OMLE (now called the Canadian Forces Military Law Centre (CFMLC)) at RMC Kingston., a joint effort of the Canadian Defence Academy and the Office of the JAG to provide innovative legal research, education and training to the CF. Developing curriculum and teaching two 3-4th year courses at RMC took up 70% of my time. Within the broader context of Public International Law, The Law of Armed Conflict (LOAC) course POE488 considers LOAC`s two branches, the jus ad bellum (the right to the use of force) and the jus in bello (the law applicable in conflict). POE486 Air and Space Law focuses on the international and national law applicable to air operations and outer space activities, particularly of a military nature.

12339 LCol Randy Smith: I advised the Commandant on all types of legal matters including contracts, insurance, civil liability, grievances (both military and civilian), professor disputes, and officer cadet alleged misconduct that was serious and warranted MP/NIS investigation.

e-veritas: Your current position is varied compared to a traditional practice in administrative and personnel law.

e-veritas: What are the other highlights of your legal career in JAG?

12339 LCol Randy Smith: I started my career in JAG serving as defense counsel and prosecutor in both official languages.

As a legal advisor with Chief Military Personnel, I served as counsel on many cases related to the principal of “universality of service” within the larger context of human rights. Universality of Service requires members to perform general military duties, such as maintaining physical fitness, in order to continue service with the Canadian Forces.

I served as legal advisor to Canada Command from 2007-10, which is responsible for the day-to-day oversight of domestic and continental routine and contingency Canadian Forces operations. The Command has a lead role in: Daily domestic and continental operations, including in the Arctic and through NORAD; Support for major events held in Canada, such as the 2010 Olympic and Paralympic Winter Games; Response to a terrorist attack; and Support for civilian authorities during a domestic crisis such as a natural disaster. This posting was exciting, and involved very long hours, often in the middle of nights and on weekends. 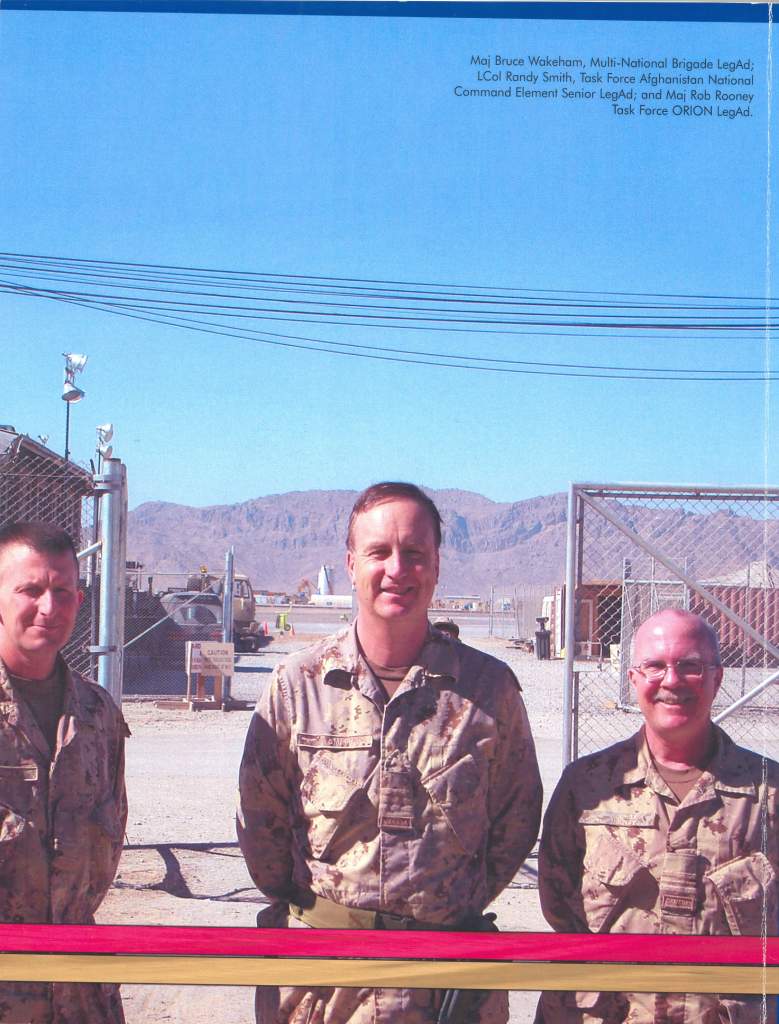