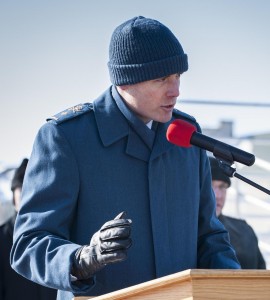 The Canadian Flag has been taken to space, to the highest mountaintops on earth and to the darkest depths of our oceans. You can also see it worn proudly on the uniform of every serving member here in Canada and abroad.

Our flag is a symbol of unity for all Canadians and a symbol of home for the men and women of the Canadian Armed Forces and Department of National Defence, diplomats, athletes, and every Canadian who travels abroad.

Our great Flag unites us all, no matter where in the world we may be serving.

The Flag continues to inspire of all us to face our respective missions, tasks and duties with bravery and courage knowing full well that it connects each of us to all other Canadian across the vast expanse of our country.” 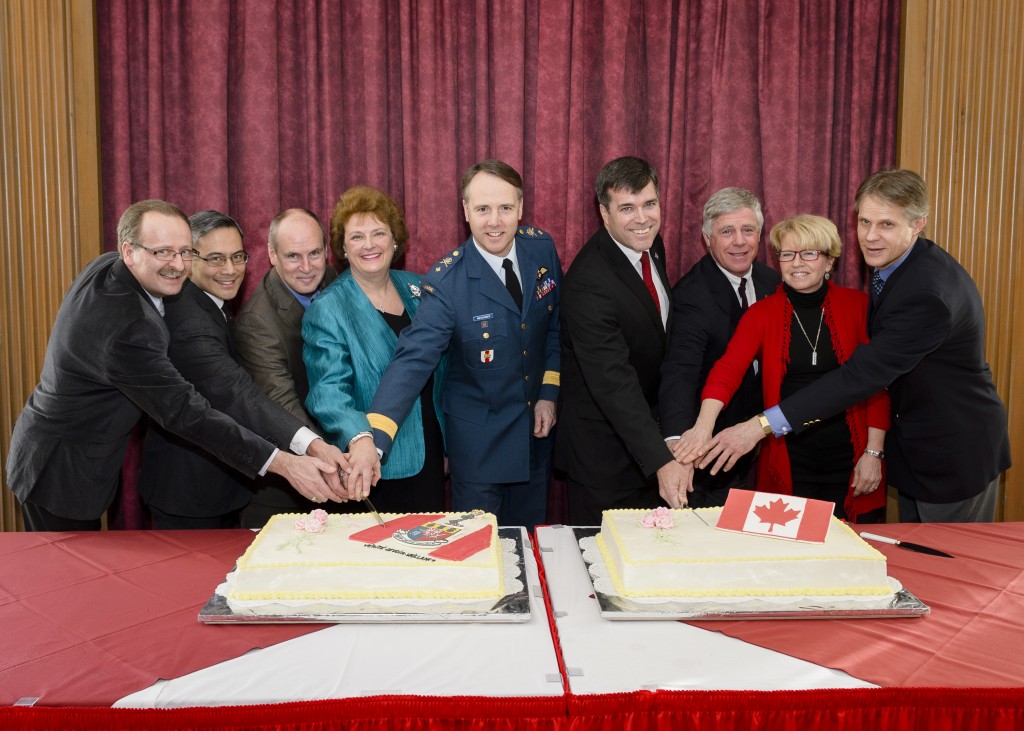 Well over 1,100 people celebrated the 50th anniversary of the Canadian flag at RMCC this past Friday, 13 Feb – including cadets, military & civilian staffs and guests. 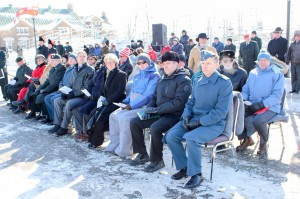 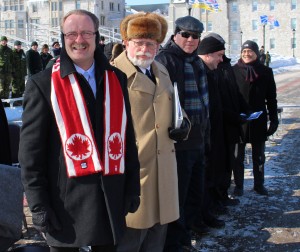 The weather was around -25c, with no real wind and a bright sunny sky. Everyone pretty well dressed for the conditions; hence there were a  variety of head gear changes by military personnel during the 45 minute ceremony. 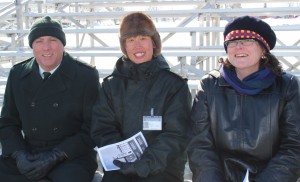 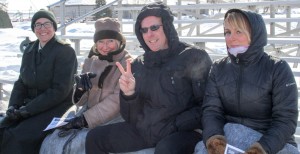 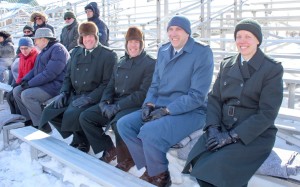 The photos pretty well tell the story in regards to weather. 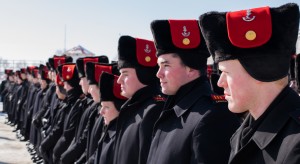 Nevertheless, all in attendance and most of the 965 cadets on the parade seemed to be pleased (proud) that they could participate in this very special event with the college connection.

The stage was set for a reenactment of what took place at the same spot on a Monday, 15 Feb 1965.

The Master of Ceremony, Captain Vincent Gallant, a military faculty lecturer in the Civil Engineering Department announced to all present: “I would like to remind everyone present that the red ensign is being flown today for educational purposes and shall not be awarded standard protocols typically awarded to a national flag. All marks of respect will be given to our National flag as directed by the Parade Commander – Director of Cadets, LCol Mark Popov.” 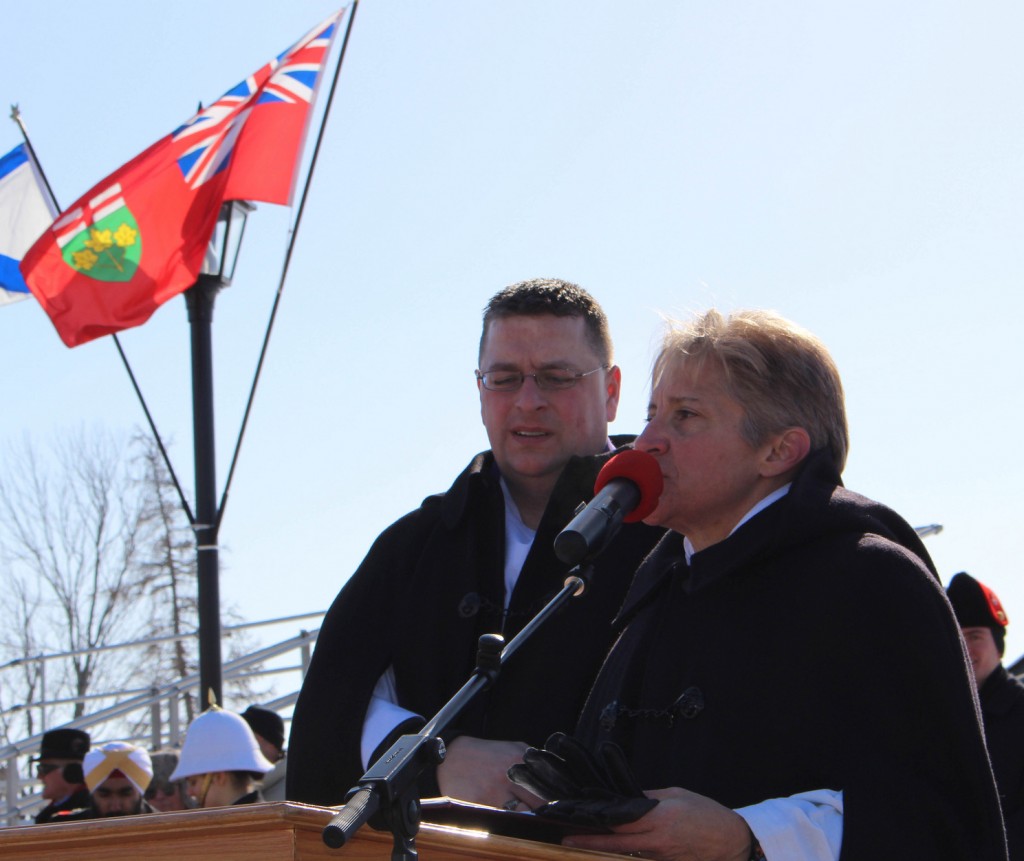 The commandant, BGen Al Meinzinger was the first of three speakers. He kept it short but as usual, his message was right on target.

“As the Cmdt of RMCC, and one that has been in uniform for almost 30 years, there have been the occasional moments throughout my career which have inspired me (such as beating West Point on the ice and walking off this very parade square as a commissioned officer). I know today will certainly be another one of these precious moments.”

The soon to be Ottawa bound, MGen added: “Today, we commemorate the 50th Anniversary of the official adoption of the current design of the Canadian Flag…yes for those purists…a couple of days early.”

Some in the RMC community had wondered why the ceremony was not being held on the actual anniversary date – Sunday, 15 Feb. Of course, with the Ontario wide, University Reading Week starting on this weekend – common sense prevailed.

The next speaker was, Dr Ron Haycock the well known and highly respected history professor who has been on the 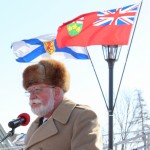 RMCC scene since 1975. His detailed and well researched presentation on the beginnings of the Canadian flag which is a must read and is located in its entirety elsewhere in this Issue of e-Veritas. 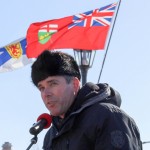 A piece of work that will be retained in our archives.

The third and final speaker was 14872 Mr Pierre Lemieux, Member of Parliament for Glengarry-Prescott-Russell, who was representing the brand new Minister of National Defence, Jason Kenny.

The RMCC Bachelor of Mechanical Engineering graduate endeared himself to many in the crowd; definitely all the cadets on the parade by ensuring them that he would keep his talk to under two minutes. He kept the promise and managed to touch on the important points of this significant occasion. The moment had arrived. 12 noon to be exact.

The commencement of the flag ceremony: 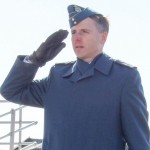 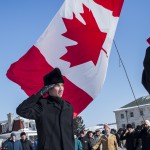 Once the customary parade ending military protocol was complete – most everyone headed to the Senior Staff Mess for lunch and or a piece of the special cake that was made to mark the occasion.

During casual conversation indoors, the high majority of people that this writer spoke to expressed the opinion that this special ceremony was very well done and they were glad to be part of this historic event.

A special thank you to: Major David Muralt for making a number of the Base photos available in a timely manner and to OCdt Denice Zoretich for her behind-the-scenes work in uploading the many photos to Flickr.