“How we educate, train and develop our people is the business of the Canadian Defence Academy. How well CDA does this is tied directly to the quality of its leadership team. That’s why we will always ensure that CDA has the highest quality leaders the Canadian Armed Forces can produce.” 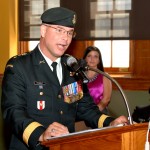 MGen David Millar, Chief of Military Personnel, was the Presiding Officer for this Change of Command Ceremony.

Véronique Storey, SSO Governance and Policy Coordination from CDA, handled the Master of Ceremony duty in a highly efficient manner from start to finish, which took just over one hour. 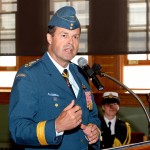 Former RMCC Commandant, Tom Lawson, now CDS, led off the short parade of speakers. The Toronto native, former fighter pilot and former Cadet Wing Commander recalled his days as a cadet attending lectures in Currie Hall, its history and the importance of it as a national treasure. “[Currie Hall] was built based upon designs requested by one great Canadian General, Sir Archibald Macdonell, who was Commandant at the time, to honour the famed Canadian Corps and their battles in the First World War, and its commander, another great Canadian General, Sir Arthur Currie.” General Lawson added, “for 90 years people have been entering this Hall to witness important events. “

This short history lesson from the CDS set the tone especially for the non-military spectators in the crowd on the significance of this CoC event. He also emphasized how important CDA’s role is to him, personally, and to the Canadian Armed Forces in overseeing the Canadian Profession of Arms.

“It is not at all an exaggeration to say that the Canadian Armed Forces’ wonderful and chronicled successes in wartime operations throughout this century, and in protecting Canadian interests at home and abroad today, is tied directly to the way we educate, train and develop our people.” 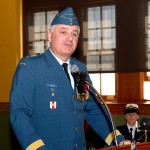 The outgoing Commander of the Canadian Defence Academy, MGen Forgues, in his final address, touched all the bases as he is moving into retirement after a very distinguished 33 year career.

“The experience of command is a very personal journey, one that is deeply felt, and a commander cannot help but be completely absorbed by the responsibilities of command, and perhaps this is why that before you know it, it’s all over.”

The two year CDA Commander added, “…we believe that our personnel are our fundamental resource, and that our performance as a military force is enabled, indeed made possible, by our investment in the professional development of our officers and NCM’s.”

Chief of Military Personnel, MGen Millar added a bit of jest to what was a sincere send off for the outgoing Commander and a warm welcome to the

“His [MGen Forgues] leadership in sequestering the Technical Authorities across the forces has been both herculean and ground-breaking. His advice to me personally has been thoughtful and compassionate. Whether it be about 2nd language, officer Development Period 5 or Board of Governor related, his humble advice was profound. He would often tell me that to achieve better harmony among the 3 Service Training Authorities, I needed to be equal rank to the Commanders of the Army, Air Force and Navy, and that I should approach the CDS.” All the time, CDS was sitting in the front row taking it all in but not taking notes.

Freshly minted MGen Tremblay just one day removed from his position of RMCC Commandant was his ever confident self in accepting the challenge of becoming the fifth Commander of CDA.