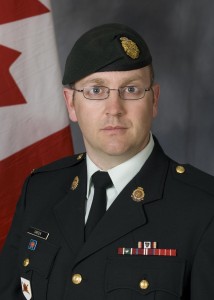 20751 Lieutenant-Colonel Wayne Green (Class of ’97) started his career in Armoured and made an occupational transfer within two years from graduation to Army Logistics.

Like most career officers in recent years he has had a number of postings within Canada and operational tours. This has

included stops in: Edmonton (2)  – in a seven different positions; Petawawa; and Ottawa. The Calgary, Alberta native has completed two tours in Afghanistan, the first as QM of the 3 PPCLI Battle Group on OP APOLLO in 2002 and the second as the J3/J4 of Joint Task Force Afghanistan.

Lieutenant-Colonel Green currently resides in St. Albert with his wife Theresa (nee Tompkins) and their two daughters Hayley and Sydney.

Originally it was the lure of travel (then CFSU(E) closed in 1993. Since graduation from RMC it has been the enjoyment of the complexity of supporting CAF operations and figuring out how to solve some of those complex issues.

Seemingly as with most careers in the military, it is understanding the jobs you get placed in that you have limited formal training for and must use on the job experiences from your past and reliance on others to ensure you are going down the right path. There have been several positions either “out of trade” or “out of scope” of experience that you get placed in during your career and you must quickly adapt and overcome your lack of detailed knowledge. Some of those positions prove more difficult that the other and each provides their own unique sets of challenges.

First and foremost it is having an amazing, understanding and compassionate wife and two outstanding daughters. The next two accomplishments I am proud of are the two tours to Afghanistan. In two distinct roles during both tours it was the sense of being able to implement some changes, some big and some small, that hopefully made a difference. Lastly it is seeing individuals who worked for and with you succeed in their career and life. I am not taking any credit it their successes, rather it is great to see good individuals succeed in whatever it is they are looking to achieve in their lives.

The most influential people were mom and dad. They set the stage for allowing me to be where I am in life. They are closely followed by my wife and daughters. Between them they keep me in step and keep me honest making sure that I stay honest and true.

In terms of non-family mentors the most influential mentor was likely my first, a high school football coach. Looking back over time, he instilled a lot of the work ethic, mannerisms, drive and humility that I have found necessary to have on a day-to-day basis.

Within the military they have been many mentors. Without being specific there have been subordinates, peers and superiors who have influenced me in my career.

My short term goals are to have a successful command tour at 7 CFSD and to enjoy watching my daughters grow up.