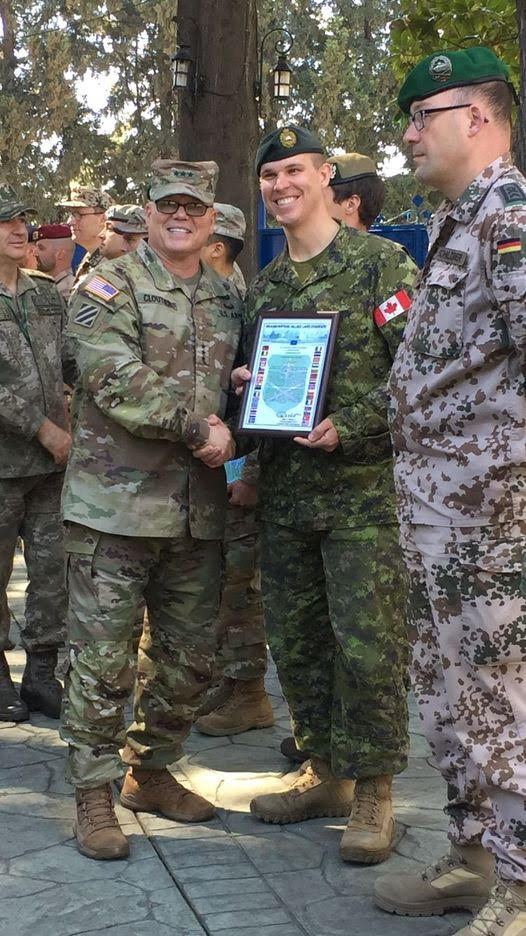 A Canadian staff officer has been recognized within NATO with a Commander’s Commendation as a result of dedicated efforts in the short time since his arrival to the headquarters.

On 13 April 2022, Captain (Capt) Alexander Landry was presented the NATO Allied Land Command Commander’s Commendation by Lieutenant General (LGen) Roger Cloutier in Izmir, Turkey. Capt Landry has been posted OUTCAN to the headquarters in Izmir since July 2021 as a military engineering staff officer within the Engineering Division.

Since his arrival, Capt Landry has been involved in all facets of the headquarters’, colloquially termed LANDCOM, pursuits. This has involved new analysis of the Command’s environmental policy as the environmental protection officer, while also making significant contributions to military academia via journals offered by institutions such as the Royal Canadian Military Institute and the Atlantic Forum.

Overall, this award recognizes Capt Landry’s dedication to matters within the Land Domain and informal leadership since his arrival at the headquarters, particularly with the renewed conflict between Russia and Ukraine.

The specific citation reads:  “Capt Landry is recognized for his exceptional organizational skills, tremendous capacity to accomplish work and deliver results, and his valued contribution to the headquarters”

Capt Landry looks forward to continuing delivery of results in all capacities of military engineering, particularly as the NATO Response to Russian Aggression in Ukraine (NRTRA-U) stretches into the summer.