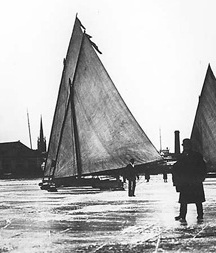 Church parade today was a farce—it was very cold and we were not allowed to pull our ear lugs down. The Brigadier carried out a full inspection and there was a continual stream being sent off with frozen ears. Freddy Gilbert has been out in the iceboat for the past day or so and there is now a good solid sheet of ice on the lake. Was in again to McDougall’s and had a really delicious meal and listened to his uncle tell stories all afternoon. The hockey team got back all tuckered out after a big weekend in Montreal. The rabbit had a great time and looks a wreck.

At last orders stated today that the ice was safe for skating and a few fellows were out on the bay after lectures. There is unfortunately a lot of snow on the ice. Fritz is all for flooding the bay with a by hose and a pump! The outdoor rink is getting a smoother layer now as more water is poured on it. There was a little horseplay in P.T. today so the Sgt. Major nearly ran us into the floor. I was beat even before starting the gym team work after lectures. After tattoo Corps, Don MacKinnon, Dave Winters, and I were over practicing our pistol shooting and I got my highest target yet: 89/120. The steady practice really pays off. Work is piling up on us at a stunning rate and the exams are coming closer and closer.

Very normal uneventful day—colder and more snow—I’m stiff as blazes from P.T. Our flight took G flight 30-16 at basketball. I had someone get me some soap in the canteen and they got me a bar of Cashmère Bouquet “with the aroma that men love!” Well, I reek of the damned stuff now and bring down nauseating comments in the mess.