e-veritas: What follows is a profile of Murray Thom taken from RRMC Log Yearbook somewhat amended to highlight points that would have well known at the time: No. 4104 C-S/L Murray Darryl Thom of Vernon, B.C. Air Force: This bag-pipe-playing Vernonite is the only member of the Vernon trio, as far as we know, who does not believe in the existance of “ago Pogo”. As a first term Cadet Squadron Leader. Murray was the terror of the Junior Term, and the object of admiration of the remainder of the Wing. He spent a delightfully slack time during the second and third terms as a Leading Cadet, returning to his former position as No.4 Squadron Leader for the final term. Although he is an average athlete, Murray more than makes up for it with his marks, standing first last year and again this year. He plans to take the new Engineering Physics course at R.M.C., and we can’t see how he can possibly miss. In the Gunrooms, he may be found catching up on his current events, listening to march records, or fighting Byer and Booth in the corner. For amusement on his , week-ends this summer, Murray punched a time-clock at Penhold. and during the remainder of the week he drove a plane for the R.C.A.F. Murray enjoyed himself last summer, for he likes his job as a pilot, and it didn’t take too long to run from the Mess to the time-clock on the weekends. Go easy on the planes during this coming summer, Murray, for the tax-payers’ sake, and we’ll be seeing you in “God’s Country” this fall.

Murray Thom: I was a member of the RR pipe band, when I was a cadet, 54-56. When an academic instructor, 63-66, there was no pipe band in the RR cadet wing. When I returned as the Registrar at RR, 83-91, the pipe band was very active but I did not participate. Once when observing a practice parade I asked one of the pipers if I could play his pipes. After a short tune his very diplomatic comment to me was “Sir, I can tell that once you were a piper.” I did not take that as an invitation to play with the cadet band!

As a staff member I was at the ceremony when the Canadian Flag replaced the ensigns and the ensigns were displayed hanging from the ceiling above the Castle foyer. I do not know when the College Colour or the Queen’s Colour were presented but when I was the Registrar, 1983 – 1991, they were displayed in cabinets next to the fireplace in the great hall (foyer?) and when one was to be paraded it was removed ceremonially by the colour party. I understand that both Colours were laid up in 1995. 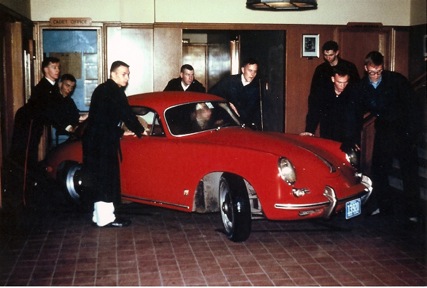 Murray Thom: As for skylarks, I have attached a photo taken of my 1961 Porsche which I brought back from 1 Air Division in 1963. The car appeared in the lobby of the Nixon Block one night when I was the duty officer. The cadets had managed to lock my cabin door from the outside after I had retired for the night. When the commissionaire called me about the car at about 1:00 am he got the door unlocked. I got the duty cadet officer out of bed, instructing him to find out who had done this and to remove the car. He reported back that he could not find out who had done the dirty deed. The photo arrived in my office the next year – the duty cadet officer taking part in this skylark is the one with his hand on the door. If I remember correctly his name was Rusconi and responsible for the cadet wing doing early morning drill at 5 am that morning.

e-veritas: What follows is a profile of Murray Thom taken from RMC Review Yearbook 1958 somewhat amended to highlight points that would have well known at the time: 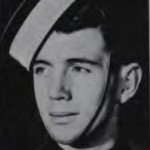 “For the first time in No. 6 Squadron history we reached the pinnacle of prowess and on the right of the line earned the privilege of displaying from the flag pole a very new, crisp gold pennant…. Our “boss-man, Murray Thom, ascended to the golden realm and here has achieved during the year an atmosphere of unity, loyalty and enthusiasm, born of sound judgement despite a broken ankle and supported by his colleagues of the senior year.”

e-veritas: In 1957/8 the quality of performance was ensured both by the influx of new members from the sister colleges and by the development of novice players from the first two years at R.M.C.

Murray Thom: I moved to RMC from RR in 1956 for my final years and during my third year, 1956-57 I played the great highland bagpipe in the RMC band. when C.F.L. 3591 Don Gregorie was the “Pipe Major”/Band Officer.

e-veritas: What challenges did the early band face?

Murray Thom: I do remember having to pipe with the band for the church parade to Kingston in the midst of winter. It was so cold that we were using oil of wintergreen on our hands to help keep the fingers going. By the time we reached the bridge over the river I am sure that most of the drones reeds had frozen and at any one time only about two chanters were playing. I cannot imagine the music/noise that was being made or how the cadet wing was able to march to the “tune”.

e-veritas: You provided e-veritas with a photo of the RMC Pipe Band 1956/57. Which of the members can you identify? 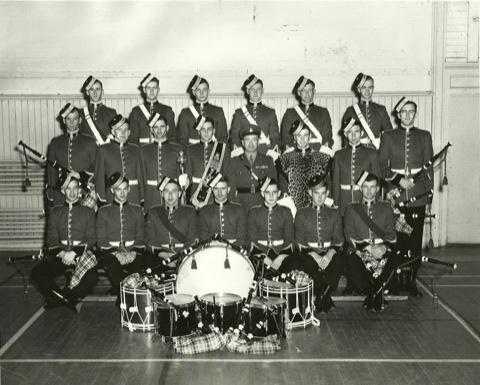 e-veritas: I understand that Lieutenant-Colonel (ret`d) John (Jock) MacMorran Anderson MC and Bar gave invaluable general direction and enthusiastic support to the Pipes and Drums during his tour as the Protestant Padre at RMC.

Murray Thom: Our instruction really came from Maj Anderson and Don Gregorie. Maj Anderson was a great supporter and help to the band. I note in one article/interview you recorded, mention is made of Maj Anderson’s MC and bar for his work recovering casualties from the battle field under enemy fire. I distinctly remember Maj Anderson responding to my query about the medals, unusual for a padre, by stating that he was tending to the injured and dead “while being bombed by you lot!” (I was a flight cadet in the RCAF.) That was part of the action when some of the RCAF bombers actually dropped their bombs on the friendly forces during the Normandy campaign.

e-veritas: What tunes did the band play?

Murray Thom: Basically simple tunes. I remember Scotland the Brave, the Back of Benachie, Green Hills of Tyrol. We did have a few bars of O Canada that we tried at a hockey game – once!

Murray Thom: I do not have too many stories to relate but we did play at the occasional hockey game and football game. The drum major was 3966 WJ (Bill) McMaster who did a great job with the mace. At one performance on the football field he tossed the mace as the band went under the goal when the mace briefly hit the cross bar and fell forward. Bill caught it as though that was what he had intended!

e-veritas: Did the band have special uniforms or regalia?

Murray Thom: Unfortunately no. We just wore the regular RMC uniforms. I don’t think we even thought of wearing the kilt.

e-veritas: You continued to play the pipes with Kalamalka Highlanders Pipe Band after graduation?

e-veritas: Several queries have been received at Panet House regarding the various prefixes attached to College Numbers. 5611 Gerry Stowe (Class of ’62) wrote an article in the December 2002 issue of Veritas.

Murray Thom: Gerry has done a good job of explaining college numbers, but there is one error that I noted (but did not comment on when his article first appeared). In the entry of 1951 the allocation of numbers went in sequence from being selected to attend either RMC or RR. In the entry of 1952 this was also the practice for the CMR entry, but in 1953 a separate allocation for CMR followed the combined RMC/RR entry.

In 1956 separate allocations for RMC, then RR, then CMR were made. I am not sure of the reason for the change in 1951 unless it was because of the introduction of the ROTP and the ending of entrance examinations. I was always aware of the the combined allocation because of my number was 4104 (at RR) and 4106 was Peter Meincke (at RMC). I never did know what happened to 4105. Also of note is that with the separate allocations from 1956, there appears some missing numbers, as in 1956 the last entry to RR was 4983 and the first entry to CMR was 4987. From 1957 the allocation of numbers were assigned alphabetically for each college. https://everitas.rmcalumni.ca/?p=7833

e-veritas: Anything else to add?

Murray Thom: Just hope that you might make use of these few remembrances.

Well done to all those who have been in the RMC band at one time or another over the years!

PREVIOUS ARTICLES ON THE BAND FROM VICTORIA EDWARDS: