The operations of the tactical operations centers of combat battalions, brigades, divisions, and corps and the companion operations in the combat trains of each level formation are seldom commented on.  Especially left out of the commentary is the leadership specific to the operations of these elements.

Yet, from experience with these teams in the referenced organization above, the function of these elements plays a crucial role regarding the effectiveness of formation operations and the ability of formation leadership to exercise sustained effective command, control, and planning.  This includes more fully developed functions of the command decision processes.  They are the nodes that integrate and sustain the around the clock situation monitoring and the never ending planning and contingency development functions in support of the commander in the tactical decision and execution process.

As such, one would expect more attention to examining how leadership specific to the operations of these elements does or does not work.  To degrees the functions have been impacted by the steady introduction of communications, information sharing and processing capabilities over the last three decades driven by micro-computer, digital data, satellite, micro wave, digital graphic, drone and a number of other burgeoning technologies and capabilities being accessed by armies to enhance the function of these elements.  Yet, some aspects of the operations of these nodes remain unchanged over time.

Some of the unchanged verities are the soldiers that constitute the elements.  Another is the effects of weather and terrain and ability to be as agile as possible, a need that has increased in importance over time thanks to the march of technology least not being enemy detection and locating capabilities along with ever increasing lethality capabilities over ever greater distances.  The human element alone in an around the clock scenario presents the limitations if not effectively considered by the leadership applied of the crippling, and not infrequently deadly, effects of rampant sleep deprivation.

Yet, as important and challenging as the leadership of the command and control nodes for the combat and tactical logistics functions of these formations may be, little appears in writing about leading such elements.

Following are observations regarding leadership aspects of tactical operations center and combat trains functions at combat battalion, brigade, division and corps levels.  It will be noted that the function of any of these nodes is a team effort and though there are designated leaders by position, there are multiple leaders within the team whose function is crucial to the ability to operate and perform mission.  Generators alone if not handled and sustained effectively may dramatically reduce function.

Battalion level tactical operations centers (TOCs) and their equivalent logistical  companion, the latter often considered a basis for an alternate TOC if the latter is destroyed or otherwise rendered unavailable, vary in constitution based on type formation.  A foot infantry, or any other tactical organization that will primarily operate on foot, TOC is usually as light as possible in its configuration.  When in place its sheltering tends to be types of tentage and tarp covered extensions from the few typically wheeled vehicles assigned.  Over time, a never-ending momentum to develop lighter more durable covering materials and framing that can be ever more rapidly deployed and recovered has been in progress.

In contrast, heavy force or armored formations employ, typically, tracked armored vehicles adapted to the role of supporting TOC or trains command and control operations.  Some vehicle systems may be fairly basic leading to unit adaptations when necessary and some vehicle systems may be substantially developed to the function to include the ability to extend the sheltered working space with types of extensions like tubular frames erected from the vehicle when in position with tarp covering.  As well the purpose developed vehicles have designed in features to support the communications systems and power requirements of the command and control (C2) communications network.

Parallel with this thread of development has been the evolution of materials, equipment and systems to allow the understanding, analysis and planning and execution of operations over assigned terrain to include dissemination of communication to subordinate and higher units.   This has been a  progression that has used paper, writing instruments as basic as graphite and grease pencils, typewriters, word processors, types of paper to include transparencies, acetate, jelly rolls, and mimeo machines…fast forward to today’s ever developing computer and graphic and networking capabilities.

As well, the communications capabilities essential between command elements have progressed from drums and bugles, semaphores, smoke systems, foot and horse mounted messengers, telegraph, land line field phones, radio on to micro-wave and satellite systems.  Yet interestingly, even as the newer technologies are applied, the earlier systems continue to find their way into the mix of communications, especially as adversaries develop means by which to negate even the most advanced abilities wholly or in part, making alternatives essential.

The above has always required the need to produce illumination in TOC and Trains sheltered workspaces during the dark hours and to provide increasingly, electrical power for the communications systems, ancillary lighting, and heating or cooling systems.   These needs make generators and batteries significant parts of the TOC and trains operations.  This need for power to operate equipment has also fueled a parallel development of ever more capable and reliable power storage in form of battery technology.

The burgeoning importance of power generation and reliance on generators as well as the placing of TOCs and Trains in vehicle supported formats greatly increased the fuel needs in form of gasoline, diesel and other fuels, even kerosene and certain oils  in earlier times all adding their own logistical aspects to the operations of these elements.

The array of growing aspects to operating such elements as the TOC and trains fueled a curious tendency to ever increase manning levels of these elements.  This could only be accomplished by pulling personnel from elsewhere in the formation.  If not careful, the elements could assume ridiculous size, especially if large amounts of security were also added.

The latter temptation particularly, could start to rob the combat forward units of personnel that, especially after units had become depleted in operations due to casualties, could severely compromise combat effectiveness.  And thus a perennial yin and yang tug on keeping the TOC and trains to an “about right personnel” level and not robbing line combat strength has been a feature of TOC and trains operation and leadership.  Good leadership has perennially been challenged with developing TOCs and trains that are drilled and proficient but not over staffed at the expense of the combat strength of the formation.

The most challenging effort of the leaders who make a TOC or trains work is to effectively understand and visualize the purpose and function of the element relative to the commander’s need as well as to pay attention to the organization’s needs for key information, combat and logistics support.  It is critical that the leader be clear on these elements’ primary and secondary functions to support the commander and then the larger formation in execution of current orders and sustaining operations.  It will be noted that the units have a “doctrinal” basis to the constitution of these elements but they will be adapted as necessary to the needs of the commander and the units and the leaders of these elements will operate within that expanded as necessary parameter.

Within the preceding understanding the element leader and supporting team leaders must effectively organize the personnel and resources available to meet that purpose and function.  They will do so within an operating concept that as clearly as possible breaks down the individual and collective mission tasks, trains them to standard when not deployed and executes them to necessary mission standard while deployed.  Everything from operation and maintenance of assigned vehicles and communications equipment, generator deployment, tentage and shelter deployment and recovery, tentage maintenance, shift operations, element security and operation, movement operations, and troop support in form of food and supply all require training, exercise and follow through by the leaders of the TOC and trains  element.

This is a complex array of tasks and functions that have to be orchestrated by the leaders extremely well for the formation to function well.  This is especially the case in mission planning, execution and recovery.

It has happened for instance that a TOC got lost or destroyed due to failures in its ability to operate effectively as a well led and competent operational team.  Factors such as inability to navigate, move on terrain, cover, conceal and secure itself or maintain necessary noise, light and communications discipline relative to the threat rendered the TOC or trains targets that were destroyed.   The TOC and trains are in a deadly game when operational, even in practice, where their individual and team competencies across a very large array of task skills must be to standard if they are to survive, never mind perform effectively in their C2 and support orchestration missions.

In today’s environment for example, if deployed against peer or near peer forces, the TOC and trains will, to survive, have to make all efforts to reduce electronic and other detectable signature, displace frequently and yet do so with such efficiency that necessary C2 function is sustained.  This is a demanding and challenging achievement on a sustained basis by the available TOC/Trains teams.  The leader will have to consider this aspect in assuring that team members are rested to prevent degradation and possible catastrophe due to excessive fatigue and sleep depravation. 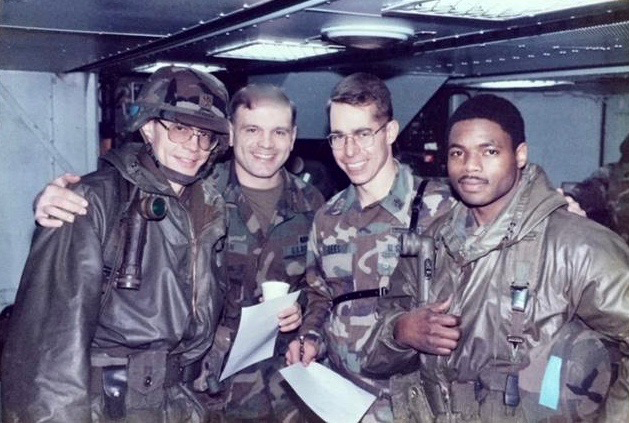 Three officers and a senior non-commissioned officer assigned to the 1st Armored Division TOC photographed inside the TOC during REFORGER operations in 1985.

The actual experience illustrated the unique but critical function of leadership in the effective operations of the TOC and trains teams.  The skill of the leaders of these elements in practice was in many ways as vital as the leadership of the combat elements of the formations.

It is worth noting that many of the above leadership observations crossover to the incident command system applied by the Department of Homeland Security and at all levels of civil government below federal.  A significant incident such as a major hurricane deploys a very similar command and control and support system to the tactical TOC and trains structure of combat formations per the incident command doctrine that has been developed over the last two decades.

As is so often true of effective team function in practice, leadership by the leaders of these command and control and logistic support nodes and their teams is essential to mission effectiveness and very often survival.