e-Veritas: What extracurricular activities were you involved with at Military College? Did you hold leadership position(s)?

Jacques Choquette: I played intermural sports. I had a bit of a struggle both academically and athletically, and this detracted any aspirations I might have had for more senior leadership positions. I served as a Cadet Squadron Training Officer (3 bar). Upon graduation from le College Militaire Royal de Saint-Jean and the Royal Military College of Canada, I obtained a Bachelor’s degree in Commerce.

Jacques Choquette: I served as the regular forces in the Royal Canadian Corps of Signals with the rank of lieutenant until 1962. I then attended Queen’s University where I earned a Master’s degree in Business Administration, majoring in marketing and finance. From 1964-72, I was the Executive Director of the Canadian Association of Provincial Liquor Commissioners. I was appointed Chair of the Northwest Territories Board of Liquor Inquiry in 1968-70. In 1971-1973, I served as the Secretary-General of the Quebec Liquor Permit Control Commission. In 1974, I was appointed Commissioner of the Quebec Municipal Commission which oversees the province’s 1400 municipalities and conducts public inquiries into the administration of some municipalities. I attended the National Defence College (Course XL) in 1986-7 along with 8833 Colonel (Ret’d) Dr. John Leggat (RMC 1971), who served as RMC Club President 1999-2000. Since I retired from the public service in 1998, I have spent most of my time as a fundraiser for the Valcartier Family Centre (VFC), which is a part of the national and international network of Military Family Resource Centres (MFRC). Through VFC, a non-profit organization that has been serving the military community throughout Eastern Quebec for the past 15 years, I often run into alumni of the Military Colleges. I’d like to acknowlege H7860 Senator Roméo Dallaire (CMR 1969), who serves as honorary president of the CFB Valcartier MFRC foundation and 19894 Mr Erin O’Toole (RMC 1995), an important donor on behalf of the True Patriot Love Foundation. www.crfmv.com

e-veritas: Do you have any advice for students who struggle with any of the four pillars: academic, language, military, and athletic?

Jacques Choquette: Certainly. Trying to balance the four pillars at Military College is challenging at the best of times. After catching pneumonia, I missed several critical weeks of studies in my first year at Military College. I never managed to catch my breath and catch up academically. Although I was heartsick from failing academically, I didn’t want to flush away years of investment and sacrifice. After considering various options, I opted to repeat first year at CMR. My academic struggles taught me to be tenacious. Even today, as a fundraiser with the Military Family Resource Center, I’m known for not giving up and not taking no as an answer. I haven’t forgotten the hardship and importance of shoring up a repeater at Military College or offering a second chance. 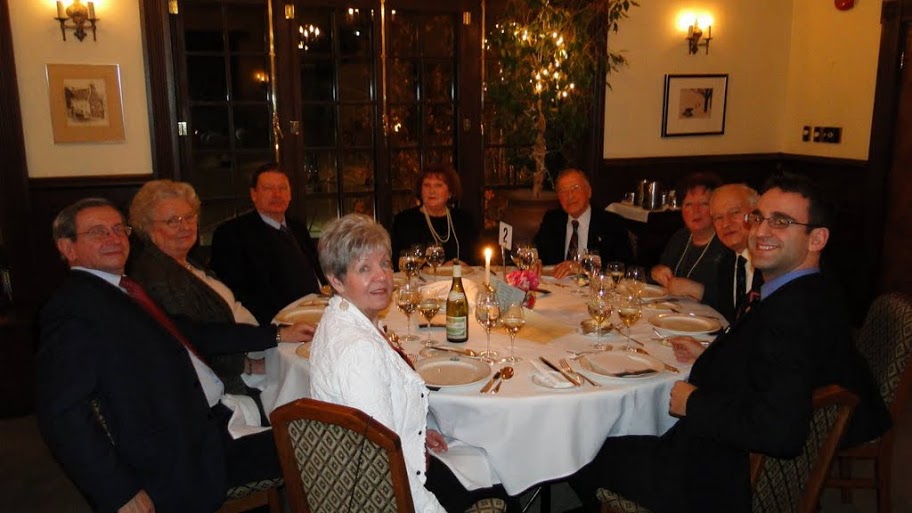 Caption: 4100 Jacques Choquette (second from the right – leaning forward) at a Quebec Branch annual gala dinner at the venerable Cercle de la Garnison de Québec (formerly known as the Garrison Club), which is located just below the entrance to La Citadelle in Old Quebec.

Jacques Choquette: I got involved in the RMC Club business as an extension of other volunteer work. I am a former member of the Rotary Club. I was National Vice-President of the United Nations Association in Canada (1984-6) and a member of La Confrèrie de la Chaine des Rôtisseurs. I am a past president of the RMC Club Montreal Branch (1983-6). I served as president of the RMC Parent Club (1989-90) and the RMC Club Quebec City Branch (1995-98). The Branches and Parent Club host monthly speakers; In the 1980s, speakers included members of the consular corps, senior officers of St Hubert Mobile Command, former Commandants of RMC such as 3572 MGen (Ret’d) Frank Norman (RRMC 1956) and various civilian leaders.

e-veritas: What were some of the biggest challenges during your tenure as RMC Club president?

Jacques Choquette: As RMC Club president, the biggest challeges dealt with rapprochement between groups of old and new members; After all, the role of the RMC Club is the bringing together of its members for mutual benefit and support; the encouragement and maintenance of that camaraderie which has always existed at the colleges, and the advancement of the welfare of its members, the cadets and the Canadian Military Colleges generally.

Today, there is a more general acceptance and different attitude that Military College campus population should be diversified rather than monolithic. Military and civilian leaders do not only come in one mold; Contact with great professors, international students, and contact with broader community helps develop better leaders. Greater academic diversity enriches the opportunities for a better education.

Jacques Choquette: In the old days (1950s) the RMC Club had a strong ingrained reluctance to change; Nevertheless the campus had diversified demographically with a university community consisting of ladies & men wearing red pillbox hats, UTPM, postgrad etc. I’d like to acknowledge a few leaders who helped bring RMC Club members together during the period I served on the national executive.

• 3918 Al Roberts (RMC 1957), adjutant old brigade committee, reached out to other branch and College-centered clubs for mutual support during a difficult time.

• G0055 Valerie Keyes (RMC 1980), ex-president of the RMC Club, reached out to relatively new categories of alumni such as UTPM/W, UTPO, UTPNCM, graduate students, extension students, and lady cadets. Since alumni took the same courses and earned the same degrees, they should be eligible for full vice associate membership.

e-veritas: I understand you were involved with the RMC Wine Program fundraiser.

Jacques Choquette: Yes. The Royal Military College Alumni Association offers the RMC Wine Program; the proceeds of this fundraiser supports student scholarships. The RMC Wine Program allows you to mix and match quantities of each of 4 VQA wines from Legends Estate Winery. Jacques Choquette: Yes. I had the pleasure to meet the Minister of National Defence, S164 Hon Peter G. MacKay, the CDS 12192 Gen Tom Lawson, and our Honourary President, Mr. Geoffrey E. Molson, President and CEO, Montréal Canadiens. The CMR Ex-Cadet Foundation and the Royal Military Colleges Club of Canada Foundation celebrated the 60th Anniversary of the founding of the Royal Military College Saint-Jean during the Gala Leadership 60, which was held at the Dextraze Building on Tuesday, 20 November 2012. The event highlighted the rich history of the Royal Military College Saint-Jean and its development of leaders for the Canadian Forces and Canada; I was interested to hear Mr. Geoffrey Molson speak about 1380 Thomas Molson (RMC 1918) and 1800 The Honourable Hartland Molson (RMC 1924). As a rep from the Quebec branch of the RMC Club, I would like to thank all those who participated in the gala and all members of the 60th anniversary organizing committee.

e-veritas: What do you know of the Club business today?

Jacques Choquette: To keep in touch, I read Veritas magazine on a regular basis. For many years I volunteered as a proofreaders and/or translator for Veritas working closely with S134 Mrs. Rolande Oliver, whose dedication I have always admired.

Jacques Choquette: Finances are the RMC Club Foundations biggest challenges since opportunities to enhance excellence in the attraction, education and training of the students lie outside the Government funded core curriculum and training programs of the Colleges; they can only be provided through private philanthropic financial support.

The RMC Club’s biggest challenges involve finances, communications and volunteers. The RMC Club generates modest funding through membership dues and a Gift Shop at Panet House and online. The RMC Club connects alumni through class and branch web pages hosted by the Club and accessed from the Club’s home page. Government funded core curriculum and training programs of the Colleges can only be funded through private philanthropic financial support. As a donor, I am a member of the RMC Club Leadership Circle.

Jacques Choquette: I am 76 years old. I retired from the Québec Municipal Affairs Commission in 1998. Ever since, I have kept fit and busy as a fundraising coordinator with the Valcartier Military Family Centre. Over the years, a growing network of benefactors has been built. Some 700 participants attended the last fund-raising gala “La Criée d’automne” which brought in some $340,000 in gross revenue. My better half, Céline Labrecque and I live have lived in Quebec City since we moved there from Montreal in 1993. Through this position, I am fortunate to regularly meet folks with ties to the Military Colleges, and the military community at large.

E3161 Victoria Edwards in conversation with G0055 Valerie Keyes who served as President of the RMC Club in 1998-99.