E3161 Victoria Edwards in conversation with H3356 Robin B. Cumine, Q.C. (RMC 1955) who served as RMC Club president 1992-3. He is a board member (Honourary Counsel) and an Honourary Life member of the RMC Club.

e-veritas: What extracurricular activities were you involved with atMilitaryCollegee.g. varsity teams, band, clubs? Did you hold leadership position(s)?

Robin Cumine: While at RMC I was a part of the football, hockey and debating teams. I acted as editor of the Marker in my third year and in my final year was the Cadet Wing Adjutant.

Robin Cumine: After RMC (Bachelor of Science), I went directly to Osgood Hall law school. During my four years, I was a member of the 27th Field Artillery Regiment, a reserve unit in Toronto.  Once I began practicing litigation, my combative instincts were channelled into the courtroom. Since I started articling in 1958, I have been part of the law firm, McLean & Kerr LLP, in Toronto, currently as Partner. I was called to the bar 1959 (ON). I was appointed Queen’s Counsel (an honourary recognition of hard work and dedication) in 1975. I have experience in Construction Law; Insurance Law; Employment Law; Labour Law; and Civil Litigation.  www.mcleankerr.com

Robin Cumine: After what I took to be the usual cooling off period, forgetting about RMC, I was asked to participate in the Toronto Branch Executive and did that for a period of five years, the last of which found me occupying the position of President of that branch and therefore a member of General Council.  It got me involved in the Parent Club activities and at the end of six years of that involvement, I found myself occupying the position of President of the Club. Robin Cumine: My main focus in that position was reactivating the, at that point relatively dormant, foundation and trying to assemble a working executive for that organization. As a result, I found myself occupying the position of President of the Foundation, following the completion of my Club positions.

Perhaps in mentioning challenges while Club President, I should comment on the fact that in my year as Club President, the then CDS, with the closure of College Militaire Royal Saint-Jean and Royal Roads Military College having being accomplished, announced that he was in favour of closing Royal Military College Kingston as well.  During a fairly lengthy interview with him in his office, a function that was annually expected of the Club President, I learned that he, not being an ex-cadet, knew little of the values and contributions of the Colleges.  While I cannot claim to have changed his mind, I may have delayed him enough that fortunately there was an early change of command.

Robin Cumine: Following my term as a member of the Group of Five, I was asked to become the Honourary Solicitor of the Club and continue to hold that position at the present time.  On that basis I think I have a reasonably good idea of what is going on with respect to the Club’s business currently and I am indeed involved in attempting to deal with some of the challenges the Club currently faces.

In my view, the greatest challenge at this time is to make the Club more meaningful for, and capable of engaging, more of its prospective members.  Certainly the internet communications between Classes and Club are assisting in this regard, but the Club must ascertain and establish facilities and services useful to members.

e-veritas: As honourary counsel, on what issues do you advise? 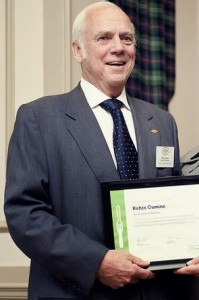 e-veritas: Would you advise cadets/Ex cadets and former students to get involved with the College extracurriculars/RMC Club?

Robin Cumine: I have personally found it interesting and rewarding being involved in the Club, Class and Branch events over the years.  I have been fortunate to have associated with cadet and ex-cadets of different age groups from many parts of the country and there is no doubt military college people are intelligent, interesting, involved and share many common values.

Robin Cumine: Currently I am still practicing law, but spending an increasing percentage of my time involved in not-for-profit and charitable organizations, including the Club.

e-veritas: You received a Milestone award in 2012 for 26 years of service from Second Harvest

E3161 Victoria Edwards in conversation with G0055 Valerie Keyes who served as President of the RMC Club in 1998-99.