E3161 Victoria Edwards (RMC 2003) interviewed Major Heather Smith; the Senior Chaplain  at RMCC, who provided photos of gifts to the chapels which were made by successive generations of cadets and ex-cadets.

The interview is timely, since both RMC and Protestant Chapels are celebrating their 50th anniversary in 2013.

What follows is description of the R.M.C. Protestant Chapel from the June, 1963, copy of the RMC Review, somewhat amended to highlight points that would have been well known at the time:

Over the past year the major contribution of the Kingston Branch Club to the welfare of the cadets at the College was our active support to the College project for the establishment of the two small devotional chapels on the top floor in Yeo Hall. The six windows in the Protestant Chapel now had stained glass panels; The Branch Club contributed a stained glass window bearing the College Coat of Arms to St. Martin’s Protestant Chapel.  St. Martin’s, the Protestant Chapel, which seats 70 persons, was dedicated May 26, 1963. A Memorial Gallery for ex-cadets in the Services who had been killed in the line of duty had been decided upon and would be placed on the corridor outside the Chapels.

Of historical interest is the fact that a plaque lists the Protestant Chaplains at Royal Military College of Canada since 1949. 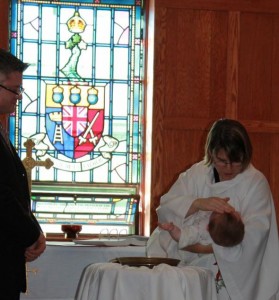 Major Heather Smith: As for the 50th Anniversary – we are proceeding with plans – our priority has been to assist with FYOP and not on anniversary services (as important as they might be). Dum spiro spero [means “While I breathe, I hope” in Latin and is paraphrased from Theocritus and Cicero].

e-veritas: Padres offer spiritual ministry and pastoral support to soldiers and their families in a range of challenging environments. How does the Military College compare with other tours?

Major Heather Smith: Ministry at RMCC is vastly different than most of my other postings. The posting most like this would be CFFS(E) which was also a training institution. As a chaplain, we try to balance the unique characteristics of there of the largest institutions in Canada; the church, the military and education (not in any particular order) It’s a demanding job with many interesting and challenging qualities. AT RMCC, we are offering services to individuals who may have just joined the CAF. Many are trying to adjust to a military environment while adjusting to life away from their family of origin for the first extended period of time – this combination makes life very difficult at times. Except for staff, OTTER Platoon and the other odd exception, the people at RMCC are young and single. Ministry to families is thus by phone or email in times of crisis. Family members also have not adjusted to this life styles and direct many questions to the chaplains office – we need to balance confidentiality with a parents desire to have information on how their son or daughter is faring away from home.

e-veritas: The military chaplain must provide spiritual ministry to all members of the Canadian Forces, regardless of faith or denomination. Explain.

Major Heather Smith: As a chaplain in the CAF, our role is to provide ministry to our own – meaning those of the same or similar denomination. As a chaplain in the reformed tradition, I offer services of worship, marriage and baptisms to members of the same tradition. We also facilitate the worship of others – if a staff or cadet wishes to partake in their religious tradition, we would endeavour to make the necessary arrangements. Sometime, that means allowing a cadet attend High Holy Day services during FYOP or allowing Wiccans to take part in their Major Sabbaths if they fall on a training weekend.  At RMCC, it has meant creating a multi-faith sacred space for use of people of all faiths or no faiths where one can pray meditate or reflect- depending on their needs. RMCC also has a foot bath for individuals who require ritual cleansing prior to prayer.

e-veritas: Do you have a role in helping cadets who are struggling with any of the 4 pillars at RMC (bilingualism, leadership, athletics, academics)?

Major Heather Smith: For the past two years, we have kept statistics on the types of concerns with which the cadets struggle. The four pillars is one of the primary areas of concern. Given the nature of the institution and the focus, this makes perfect sense. In assisting cadets in this area, we often liaise with the academic branch, the training wing, PSP and from time to time, parents. Some of the cadets in this situation struggle with having failed for the first time in their lives and it can create significant anxiety that then impacts other areas of college life. Taking a multi-disciplinary approach is most beneficial for ensuring that the cadet is able to succeed in these areas.

e-veritas: How do you keep fit?

Major Heather Smith: Keeping fit at RMCC is a difficult job. I can have the best of intentions but the fast pace and ever changing dynamics can create havoc with my physical, spiritual and psychological fitness. I have found that the key to fitness is to be very flexible. I have a physical trainer, a spiritual director and a supervisor for my own “stuff” that I constantly need to address if I am to be in peak shape at work and have energy for my family.

e-veritas: Do you have any tips for good services?

Major Heather Smith: I could write a thesis on this topic – but I won’t. At least not in this venue. Being fully present is essential – to the staff, the cadets and oneself. I believe that being fully present allows one to be authentic and engaged.

e-veritas: Your role is to provide a ministry of presence. How do you reach out to cadets?

Major Heather Smith: In order to provide effective ministry of presence, it’s important that I am present and engaged with the staff, the cadets and myself. If I am not grounded in my faith and if I am not centered, I cannot provide such ministry. For me, this ministry is like standing on sacred ground and it’s essential that I am physically, mentally and spiritually fit, before I stand in this place with another person. It’s often called “loitering with intent” because it demands intentionality and purpose. I try to be present where the cadets are engaged – while studying, at PT or SPT, between classes, at sporting events. We now have three chaplains at RMCC, thus our schedules are going to allow more flexibility to be present earlier in the morning and later in the evening. This is an exciting opportunity for our team, one that can allow for more opportunities for ministry of presence instead of being more reactionary.

e-veritas: Describe your training? Were you ordained?

Major Heather Smith: My path to ordination was a full of twists and turns. I started my post-secondary education at the Nova Scotia Teachers  College and then Acadia University receiving a Bachelor of Education with a specialty in Physical Education. I worked various summer jobs; each with different populations; physical disabilities, psychiatric/mental health, elderly and children.  After teaching for a year, I began my Master of Theology – first at Acadia and then at the Atlantic School of Theology. I was ordained in 1991 through the Maritime Conference of the United Church of Canada. My first foray into the military was with the Argy ll and Sutherland Highlanders in Hamilton Ontario. In 1996, shortly after the birth of my youngest child, I was asked if I would like to join the Regular Force. It took me 35 minutes to make a decision. It was an easy answer. I joined October 1, 1996. Since joining the CAF, I have taken four unites of Clinical Pastoral education at Portsmouth Naval Medical Center, in Norfolk Virginia. I also completed my Masters of Arts with a specialty in Counseling and Spirituality.

Major Heather Smith: In the words of General Chang, “Tickle us, do we not laugh? Prick us, do we not bleed? … In other words, every aspect of military life that affects the soldiers, sailors and navy personnel affects the chaplains and our families. My children are just as affected when I am deployed or on training. We have moved on average very two years of my military career and my children and wife are affected by these transitions just as much as any other military family. The difference perhaps is akin to the cobbler’s children having no shoes. After spending considerable energy providing pastoral care to military members and their families, I often have no energy for my own family. It comes to trying to find a balance and it’s not always easy. 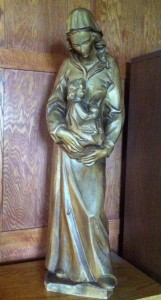 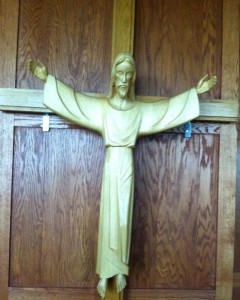 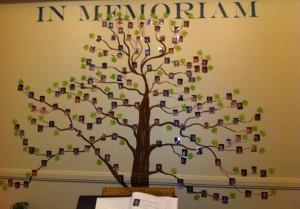