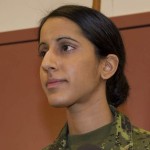 After a demanding ten-week course, another group of students have completed the Army Operations Course (AOC) at the Canadian Forces Command and Staff College in Kingston.

23469 Captain Taryn Johal (’06), a Signals Officer from Petawawa, On., was one of the junior officers to finish the course on Thursday, March 15.

AOC is a major career course with the aim of developing the essential knowledge and skills needed to function effectively at the tactical level. The focus is to educate and train junior officers to perform the duties of the staff at the unit, battle group, and brigade group levels.

Capt Johal, currently the Adjutant of 2 Canadian Mechanized Brigade Group Headquarters & Signals Squadron, graduated from RMC as a Signals Officer in 2006 with a degree in Chemical Engineering.

She completed the first portion of AOC, the seven-week Distributed Learning portion from home, followed by the eleven-week Residency Training in Kingston.

“The AOC is one of the most mentally demanding courses that I have taken so far. The course teaches you how to analyse and solve complex problems through the Operational Planning Process (OPP), work collaboratively within a Brigade Headquarters, understand what other trades and specialties bring to the table, and it also expands your professional knowledge and competence as an officer within the Army,” Capt Johal explained. “Just as importantly, students refine their communication skills, which I think is a constant work in progress throughout one’s career.”

The course is designed with the overall mission of educating and training officers within the contemporary operating environment, throughout the spectrum of conflicts so that they possess the skills to win on operations.

With this in mind, the students undergo six exercises throughout the course in a variety of operational theatres. Exercise FINAL DRIVE is the culmination of everything they’ve learned in the classroom and prior exercises, brought together and incorporated into one complex scenario.

“It’s the final exercise with the largest amount of support meant to drive home all that we learned over the last eleven weeks,” Capt Johal said.

Capt Johal came to this course with some experience in the planning process on a domestic operation. She participated in Op CADENCE, the Canadian Forces’ contribution to the G8 Summit in Huntsville, Ont., in 2010. She was posted in to the G6 Operations & Plans cell at the Brigade HQ, which was in the middle of the planning cycle for Op CADENCE.

“It was a very steep learning curve, and I had to play a lot of catch-up in order to understand the intricacies of the plan, complete work that was still required, and continue to learn my new job. That being said, it was a great introduction to how the Brigade HQ works, plans, and operates, and it allowed me to quickly understand how my role fit into the big picture,” she explained.

The AOC prepares officers to assume the next level of responsibility in command or staff positions.

“You learn the importance of cultivating and maintaining mental agility to not only solve problems, but the communication skills necessary to explain your solutions and points to commanders and staff, and how to apply the OPP collaboratively,” Capt Johal said.