e-veritas: Your 27 years of Naval Service included stops in Ontario, BC, Nova Scotia, England and the US.

Ron Capern: I graduation from RMC, with four years in the Stone Frigate, and with Navy summer training at both HMC Dockyard Esquimalt and Royal Roads, I received my commission as an Acting Sub-Lieutenant Engineer Officer [AS/LT(E)]. That was followed by a year at University of Toronto to acquire a BASc in Mechanical Engineering, since RMC did not, at that time, grant degrees.

I travelled to Plymouth, England in 1958 for a one-year Marine Engineering specialist course with the Royal Navy Engineering College at Manadon. While I was there, the RCN called for volunteers for submarine service. In spite of my Army RSM father’s advice, “Never volunteer for anything…” , I did volunteer, and was appointed to the USN Submarine School in New London, CT in June of 1959, as a LT(E).

On completion of the Basic Submarine Officers’ course, I was appointed to USS Crevalle for further training leading to qualification and award of my dolphins. In the Spring of 1961, I was appointed as Weapons Officer of HMCS Grilse (formerly USS Burrfish) and sailed from New London, via the Panama Canal, to Victoria BC.

I was then selected for Post Graduate training in Nuclear Engineering at Massachusetts Institute of Technology in Cambridge, MA. So, I spent the next three years (1962-1965) living in Lexington, MA and commuting daily into Cambridge to acquire both a MS degree and a Nucl. Eng. Degree, and being promoted to LCDR(E).

I was then appointed to, and served eight years in NDHQ (1965 – 1973) in various marine and combat systems offices, and was promoted to CDR (E) in 1969. I was subsequently transferred to MARCOM HQ in Halifax, NS, in 1973 as Senior Staff Officer (SSO) for Combat Systems Engineering. I served in that office until 1976, when I was appointed as Commanding Officer, #1 technical Services Unit, also in Halifax.

With nine years in rank, I could see that promotion beyond Commander was probably not going to happen, so I enrolled as a (full time, but evening) student in the Management Faculty of Dalhousie University to study for my MBA (Finance and Accounting), which was granted in 1978.

e-veritas: Your civilian career included stops in The Netherlands, Quebec…

Ron Capern: I left the Service in September 1979, after 27 years and one week service. I joined Hollandse Signaal Apparaten (HSA) in Hengelo, The Netherlands, on retirement from the Navy, and formed a subsidiary company (Nova Signaal) for them in Halifax to assist the Navy in acquiring spare parts for Signaal equipment aboard the DDH 280 Class ships.

Then HSA teamed with Pratt and Whitney in Montreal in (an unsuccessful) joint venture to bid on the Canadian Frigate shipbuilding program, and I was seconded to that program office in Longueuil from 1981 to 1984.

When the P&W / HSA program office folded, I formed my own consulting company. I worked with a group like-minded individuals, many of them retired military, assisting companies in France, Italy, Scotland and the USA, that wished to bid on government defence programs, to prepare their responses to Requests for Proposals. 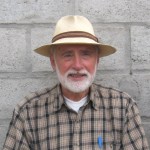 e-veritas: I understand that your path to retiring in Ecuador involved stops in British Columbia, Australia, and Mexico? Was it challenging as a retired person to achieve permanent residency in a foreign country?

Ron Capern: At age 80 (almost), I am completely retired ! I retired to the Greater Victoria BC area in 1984. In the late 1990s, I was inspired to leave BC by a book, ‘Take Your Money and Run’. By 2006, I had sold my house in Sooke, BC, and had got rid of most of the “stuff” I had acquired during my lifetime. A very severe downsizing it was; I realized that I did not really need all that “stuff” and that it had, in fact, kept me captive for many years.

I decided to visit relatives and see Australia. I bought a motor home, and began to prowl around the south-eastern states of Australia – southern Queensland, New South Wales, Victoria, Tasmania and South Australia. I had enjoyed Tasmania enough that I thought to settle there, and began enquiries in 2007 with Australian Immigration about acquiring permanent residency. While the government would be delighted to have me buy property and invest in Tasmania, I would have to leave the country every six months. The Australians had no provision, in their immigration policies, for granting permanent residency to retired senior persons.

While “on the road” in OZ, I had subscribed to International Living Magazine, which I received by Internet. In it I had read articles about Merida, Mexico and Cotacachi, Ecuador. A couple of weeks living in Belize in late October 2008 convinced me that I would never be able to handle the climate in the middle of the Yucatan peninsula of Mexico, so I decided to pass on Merida, and to carry straight on to Ecuador – where I arrived at about midnight on 01 November 2008. I have lived in Ecuador almost six years. I emigrated from Canada to Ecuador, where I now live in the village of Cotacachi, about one degree north of the equator, in the Andes mountains – enjoying a very much relaxed life style, and learning Spanish. I chose Cotacachi partly due to the cost of living in Canada, partly a wish to avoid Canadian winters and see some new places.

e-veritas: Any memories or best practices as a tenor drummer with the 1955 RMC pipe band?

Ron Capern: In my fourth year at RMC, I was appointed as Cadet 2 I/C of #5 Squadron. That 2I/C position is somewhat like a US Vice-President position (i.e., only one heart-beat from the Presidency). However, since the Cadet Squadron Leader was as healthy as any other Cadet at RMC, there was virtually no likelihood of becoming the CSL. So, I became a tenor drummer in the 1955 RMC pipe band (having discovered I had no talent for playing even the chanter, much less the pipes).

e-veritas: Living in Ecuador, any tips for keeping in touch with ex-cadets as Class (RR ’54 – RMC ’56) Secretary?

Ron Capern: I have enjoyed receiving your issues of e-Veritas each week during my move to, and time in, Ecuador. It is a great way for me to keep in touch with the Club and the College from here in the very deep south. The Internet has made it fairly easy to maintain contact with my Classmates and I continue to prepare and distribute periodic Class Newsletters – as I receive news from my Classmates about their activities. Naturally, since we are all octogenarians (or close to it), we are all much less active than we were many years ago, and Newsletters are now being published less frequently.

e-veritas: Any special memories or best practices as a former Secretary-Treasurer of the Vancouver Island (VI) Ex-Cadet Club?

Ron Capern: Some 58 years have passed since my graduation, and memories fade with time. However, I have had the pleasure, and good fortune, to have served as the Class (RR ´54 and RMC ’56) Secretary for quite a few years. That has allowed me to keep in touch with my Classmates through Class Newsletters, maintenance of the Class List, and organization of Class reunions. I had the pleasure as serving in the VI Club for some 14 years, and can lay claim to having incorporated the VI Club from the former Vancouver Island branch of the RMC Club. One highlight during that period was organizing the Western Reunion at Royal Roads, on the occasion of that College’s closing in 1995.

e-veritas: What do you usually do in your spare time?

Ron Capern: I have established an Educational Trust to provide for education of local children – few of whom get beyond sixth grade, which is the end of state-sponsored education in Ecuador. To provide funding for the Trust, I have also established an International Business Corporation (IBC). That IBC has invested in several activities, including a vineyard, a forestry project, agriculture, and even gold mining. As part of my retirement (in)activites, I continue to study Spanish. Much of my time is spent reading; either Internet articles about investing profitably, or novels on my Kindle reader. As a type 2 diabetic, I need a fair amount of exercise, so I walk briskly around the town for about one hour per day.

e-veritas: Do you run into many other Canadians, specifically ex-cadets there?

Ron Capern: I currently serve as volunteer “Warden” (a dreadful term, I think – sounds like I am running a prison – but that is the established term for the function coined by the Department of Foreign Affairs and Trade), on behalf of the embassy in Quito, for Canadians living in the Cotacachi area. As a consequence, I am aware of some 15 or so Canadian families here. However, I seldom meet many of them, as I have a very limited social life. I am the only Ex-Cadet living in this area, but I understand that there is one other Ex-Cadet a (relative) youngster, living in Quito – or at least he was, while working on the construction of the new Quito airport.

e-veritas: Do you travel back to Canada regularly?

Ron Capern: I was last in Canada in 2008, just as I was leaving. I had returned from a trip to Australia in 2007 to visit “rellies” there, and to investigate the possibilities of settling there. However, Australian Immigration had no interest in, nor allowances for, elderly immigrants… I may possibly visit Canada during 2015. I still have children and grandchildren living there, and it is probably easier for me to visit them, than for them to visit me because of their employment, or their schooling.

e-veritas: How do you compare your present location with living in Canada?

Cons: Ecuador is a developing country, so the condition of roads, streets and sidewalks is less than most North American would consider suitable.

e-veritas: What if any were the challenges in adjusting to the local customs /culture etc?

Ron Capern: Language was the greatest challenge. Since I had virtually no Spanish language skills on arrival, and since some (even modest) skill is required to survive, I took language lessons for three years. I am still nowhere near bi-lingual, because my vocabulary tends to be limited that which is required to shop and engage in basic social communication. Also perhaps because of my age I cannot seem to listen fast enough, and the local population seems (to me) to speak very rapidly!

Ron Capern: Two persons (one now deceased) still come to mind whenever RMC is mentioned: the first is the then-College RSM, Mr. Coggins. I think he had the greatest influence, on me and my Classmates, of anyone serving at the College at the time. Also, during my third and fourth years as a student of Mechanical Engineering, then-professor (and now an Honorary Classmate) S102 Flight Lieutenant Jim Moran (RMC 1956).