Skip to content
26 Feb 2012 / Alumni In the News, Archive, Catching Up With the News 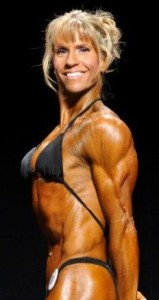 17383 Lucy Cerantola (RMC 1990) (nee Rourke) has a big date coming up 2-3 March in Columbus, Ohio where she will be competing in the Arnold Sports Festival.

The former RMC Cadet Wing Sports & Recreation Officer has the support of a number of friends and, of course, her family. She gratefully stated:  “I am fortunate to be able to work in an industry that helps youth and adults build healthy bodies and they inspire me to set my own goals!”

The photo (above) is  from her last competition almost 1 year ago in April 2011. This was at the Canadian Natural Physique Championships. Women’s Bodybuilding (Amateur) in Heavyweight where she placed 2nd  which allowed her to compete at the  international level.  Previous e-Veritas article.

“I tried bungee jumping, rock climbing, downhill ski racing; I like speed, I like to go fast!”

To learn more about Crimson Fox and their path to the World Parachuting Championship in Dubai 2012, please visit www.crimsonfox.ca. For information on sponsorship packages please contact the team at info@crimsonfox.ca.

“The main goal is to have a world we can survive in, and that’s a very important component in sustainability,”

Women In The Canadian Forces (CF)

In Afghanistan, Canada’s female soldiers earned the right to fight, and die, as equals