“I WAS IN FRONT OF CITY HALL WHEN THE FLAME CAME BY THE FRONT AND EVERYBODY WAS MOBBING THE FLAME AND AS YOU SAW WHEN IT CAME IN MARKET SQUARE THE PLACE WAS JUST GOING CRAZY WITH THE FLAME AND VICKI DID A FANTASTIC JOB COMING THROUGH THE MOB TO GET TO THE STAGE AND HER PENGUINS WERE THERE TO WELCOME HER AND THAT WAS WONDERFUL.” Former Ottawa Hospital chair Ray Hession has been tapped to rehabilitate the image of eHealth Ontario as its new chairman.

The government agency’s brand has been heavily damaged since a provincial auditor general’s report in the fall found massive-scale sole-sourcing of consulting contracts and little accomplished toward creating electronic medical records, even though $1 billion has been spent.

Hession, 69, has a resume that would fill a three-ring binder. His public-service career includes stints as head of Canada Mortgage and Housing Corporation and deputy minister of several federal departments, including supply and services. 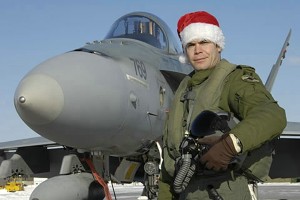 Canada still has work to do in Afghanistan

The engagement of the Canadian Forces (CF) in Afghanistan since 2002 has resulted in a high cost in human lives and material resources. Until a few months ago, the size of the CF contingent in Kandahar Province made it impossible to secure significant amounts of territory for more than short periods of time. But with the recent influx of American reinforcements, the gradual build-up of the Afghan National Army (ANA) and a reordering of the sectors of responsibility, a new concept of operations that combines a population-centric approach and accepted counterinsurgency techniques has been introduced in the province.

Canadians in Task Force Kandahar have had considerable early success in applying this so-called “village approach.” They clear an area of insurgents; hold the ground through a physical presence with Afghan National Security Forces units; and build, through the application of funding to local projects, to improve security and services and foster economic growth. In its “whole of government” approach to the Afghan mission, Canada has achieved some success in a continuity of effort among the departments and agencies involved, notably Defence, Foreign Affairs, Correctional Service of Canada, the RCMP and the Canadian International Development Agency (CIDA).

Ron graduated with a B.A. from the Royal Military College in Kingston and a M.Ed. and Ph.D. from the University of Alberta. He has extensive expertise and experience in management practices, crisis/emergency management systems and adult education and has been involved in numerous emergency situations both in Canada and abroad. When he isn’t working or volunteering he is writing magazine articles and books.

Ron is a founding member of the Millwoods Community Patrol and Edmonton Regional Crime Prevention Network. Ron is a long time soccer coach and board member of the Mill Woods Soccer Association. Ron was awarded Queen’s Jubilee medal, the Alberta Centennial medal and 2007 “Harry Hole Community Policing Award”. One of Ron’s passions the past five years has been getting a Youth Centre built for Mill Woods and the Meadows.  More More 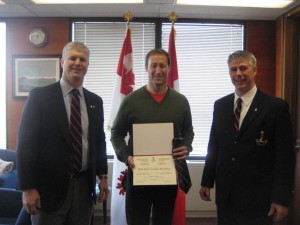 Pictured (L) is Gordon Clarke, president RMC Club of Canada  and (R) Jeff Kearns, past president  presenting the RMC Club tie and membership certificate to S164 Peter MacKay in his office at NDHQ.