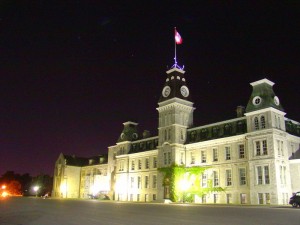 Gotcha!  All in good fun…

The RMC Parade Square is not to become a year round parking lot but our “breaking news” got many talking.

We received close to 200 e-mails during the first 24 hours. They were pretty well evenly split three ways. 1/3 realized it was a joke; 1/3 were not sure; and the remaining 1/3…hook, line & sinker!

We wish to tender our sincere and unequivocal apology to the many staff officers at NDHQ some of whom had to respond to the MND’s staff, who were requesting Briefing Note for the MND on this issue.

A special thanks to BGen Tom Lawson who took it all in stride. The second year RMCC Commandant was not aware of the skit, himself, until he read it in e-Veritas.  The soon to be MGen. and Assistant Chief of the Air Staff at NDHQ, Ottawa had to respond to irate e-mails and phone calls from a number of highly emotional charged Ex cadets for a day or so.

Bill and Rolande Oliver – and an Officer Cadet who prefers to remain anonymous.

Take a look at some of our feedback:

“Who is (or are) making this decision? Names please!!”

“I think Ex-Cadets across the country should be encouraged to call or write the MND to protest this decision.”

“This has to be one of the silliest things I’ve heard yet in the name of political correctness … isn’t exercise supposed to be good for us?”

“Below is a letter I drafted to my MP in my indignant state….”

“I am thoroughly disgusted and insulted. Please share my displeasure and disgust with whoever thinks that a permanent parking lot is more important than such trivial things as parading and honouring our dead.”

“Could someone have their head so far up thier @ss to make such a decision and attribute it to increases productivity!? Crazy.”

“My wife usually pulls one on me on this date too. But she was too busy to do so this AM, so I was vulnerable — at least for a few moments.”

“If serving ex-cadets cannot manage to preserve the square for its rightful, and historic purpose they are not worth their salaries.”

“Only an Ottawa bureaucrat suffering from a paucity of oxygen in that city could conceive of an idea this absurd.”

“I’m more than a bit angered by the depths to which our senior bureaucrats have sunk.”

“Please let me know who to write to lodge a formal complaint.”

“Certainly any serving CF member will be young and fit enough to endure the extra 450 metres.”

“That news truly is shocking; if you know who is responsible for this and who we can contact directly to voice our concerns that would be great information to disseminate.”

“Good one. I almost took it to the CDS!”

“I clearly went for the bait, hook, line and sinker.”

“It was only after I came down off the wall that I realized that there is no fool like an old fool even in April.”

“The day we actually think we’ll increase our corporate output by parking 450m closer to offices will be a cold day in….”

“I believe the Minister should be advised accordingly that this sort of petty stupidity will not be tolerated by the affected electorate.”

“And the “senior DND bureaucrat” does not wish to be named????”

“So much for military tradition….the next to go will be the uniforms for students as I am sure these military uniforms intimidate the civilian staff and make them uncomfortable.”

“Thanks for the April Fool’s joke, although a year round parking lot is not a bad idea.”

“This is outrageous! This senior civy needs to be educated on the military culture.”

“This is a major setback.”

“What’s next, an RMC degree by correspondence (including drill)?”

“Ahhhh! Scoundrel! that’s a good one…because it sounded very much like something that they would do!”

“Spoof article seemed all too plausible!”

“Bill, I think you may have been fooled. It is April 1st after all.”

“I just read the news and am quite startled. We were heading in the right direction with cadets resuming leadership roles. This is a major setback. If we keep heading down this road, RMC will become a glorified “Queen’s” University.”

“I wonder how many readers of Veritas will actually bite?”

“I bet you’ll get HOWLS of indignation from all corners of the country.”

“This being April 1st I will assume that all deceased ex-cadets need not turn over in their graves!”

“You should publish an address, email or general mail, where concerned citizens can write to bury the bureaucrats who made this stupid decision.”

“Happy April Fools to you too!!! It did generate some interesting discussion though :))
Thanks for brightening our day.”

“Why is it always bad news that makes me get off the couch and communicate! I can’t believe this latest! I think that the CF better hire more seamstresses to let out the waistlines even more – god forbid if we make employees walk!! I am shocked!”

“…This is indeed a tragic decision and I have little doubt that everyone feels the same way I do about it. I can well imagine how it would be received by Mr. Cox or Sergeant Major Fournier, who were the RSM and DSM in my day…”

“Wow, big surprise the silly servants win out again. Heaven forbid they had to walk that far for so long – I am surprised there aren’t a number of lawsuits now being formulated for compensation given the many years of injustice they had to suffer. ..
Time to mail in my excadet card and see if Queens needs any more alumni”

“Can this be an April Fools’ joke!??! Bad day for ‘scoops’ to be taken at face value. Journalists and readers beware?”

“Please let me know who to write to lodge a formal complaint. I guess the most powerful argument could come from the employees of RMC themselves (particularly those working in Currie & MacKenzie) who should, with very few exceptions, refuse to park on the Parade Square at ANY time. Certainly any serving CF member will be young and fit enough to endure the extra 450 metres.”

“How about: Highly respected Class of 65 Teaching Excellence Award to be rededicated for Parking Excellence.”

“Ha, Ha – Almost had me April Fools Day right back at you!”

“To me this is an outrage. The way I understand it, they are essentially spitting in the face of tradition because they are lazy. Trying to justify it as an efficiency and safety change is just crazy talk and we all know it. This is a military college we are talking about. Tradition and Exercise are supposed to be part of the game for staff and students – but apparently Ottawa is bent on eliminating both.”

“Oooo…that was a good one! However, when they got rid of the 5’s…I thought that should have been a bad April fool’s joke too! Thank God someone came to their senses!”

“Thank God it is an April Fools and a good one too.”

“Great one: not nearly as picturesque or historical if it came to pass, but perhaps that may be the point if this gives the gnomes ideas!”

“I was just preparing to write a response. I thought a good night of sleep on the topic would be needed to prevent any rash comments! Thanks for the joke – it did put a smile on my face.”

“As you are probably aware, this caused one huge S-t Storm of email reflecting Shock and Disbelief. Just glad it ain’t true.”

“This morning I woke up and heard it was Apr 2. Now I know. And I was wondering how “they” could do that.”

“Nicely done … that parking story. I have already had a number of calls from classmates asking if we are going to go to the barricades to reverse this outrage. I have reminded them of today’s date.”

“Please tell me that your scoop about the parade square becoming a permanent parking lot at the behest of the civilians who work there is a cruel April Fool’s joke. I really hope it is. If it was, you sure got me.”

“Bravo Zulu! Although I’m sure the Cmdt would rather not be dealing with some of those who forgot what day it was yesterday morning.”

“At least two guys from my class fell for it – outraged letters received.”

“…as the Commandant so correctly pointed out – YOU GOT ME!!!! I hope I might be excused with my initial exuberance, however, as having spent 10 years in the hallowed halls of CFHQ/NDHQ (where I believe our Commandant is now posted) I have actually been witness to a lot of similar dumb directives. In any event, you got me and I hope I’m not the only one to have swallowed the hook and made a run for it. Well done!!”

“That’s a good one – I should have known Tony O’Keeffe wouldn’t let that happen!
I think I was particularly vulnerable because every time I visit Royal Roads my skin crawls when I see the parade square there being used as a parking lot – even though I know it is now RRU as opposed to RRMC it still just seems wrong!”

“My wife says, “That’s got to be an April Fool’s joke – it’s too ridiculous to be otherwise.” I hope she’s correct.”

“This is absolutely appalling on every level from military tradition to downright laziness. Is there anything that can be done to right this administrative decision?”

“Whew – I’m relieved. I did miss the note. I should have been less gullible, as I had been completely sucked in by a CBC Radio April Fools prank earlier in the day. On the other hand, having worked in NDHQ, I remain firmly convinced that some faceless bureaucrat could easily devise a policy as brainless as the one in the joke. I’m breathing easier now.”

“Well done – I went through the anger phase until I remembered the date.”

“…The sad part is that if it was true we wouldn’t be that surprised!”

“You had me for about two minutes.”

“No April Fool’s am I. Good try though.”

“April Fools! But I bet it got a lot of blood stirring!”

“Too much time on your hands?”

“We OLD ex-cadets who live in Nova Scotia don’t get fooled by such “breaking news” on 01 April……… But we do enjoy reading every line of E-Veritas………….keep up the great work…can’t wait to see who gets caught (keep a tote !)”

“Silly Land in downtown Ottawa at DND HQ still has the capacity for stupid decisions, that is why you got me because I fear for it all of the time. Enjoy the feedback from the troops and I will stand down my crusade for sanity.”

“It was a good April Fools story lads.”

“Will this decision be reversed on 2 April?”

“You certainly brightened up an otherwise dull day here in Ottawa. It will be a tough act to follow next year.”

“Very good! You had me there. After the convulsions subsided, I was readying myself to write my letter to Stephen Harper … when I remembered the date! Thank you very much Bill and Rolande, for letting us laugh at ourselves today … and for generally keeping us so well informed all year.  Your emails connect thousands of us, illuminating computer screens in so many places. Rarely if ever do we take the time to say thank you.”