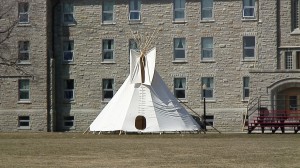 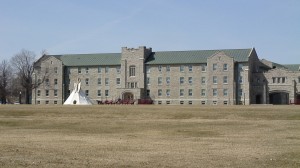 Erected outside Ft. Haldimand is a First Nation’s structure that has not been seen on the RMC peninsula for over 300 years…

In time thoughts are that the white canvas will be painted in RMC colours and decorated with First Nation, Métis and Inuit symbols: this would go a long way to show the partnership between Aboriginal peoples and the Royal Military College of Canada.

To the Victors Go the Spoils! & Water Polo Making a Splash!