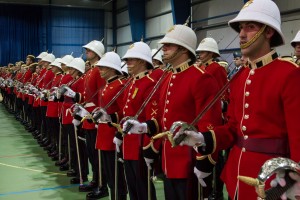 Threatening weather, 90% chance of heavy rains, in the forecast, prompted the commandant, BGen Al Meinzinger to make the call 18 hours in advance that the 2014 commissioning parade would move indoors to the Kingston Military Community Sports Centre.

And a good call it was! The 219 recipients of the commissioning scroll and their family & friends undoubtedly would have preferred outside; however, a heavy and steady rain greeted everyone from the early hours of the morning well into the noon hour made that impossible. 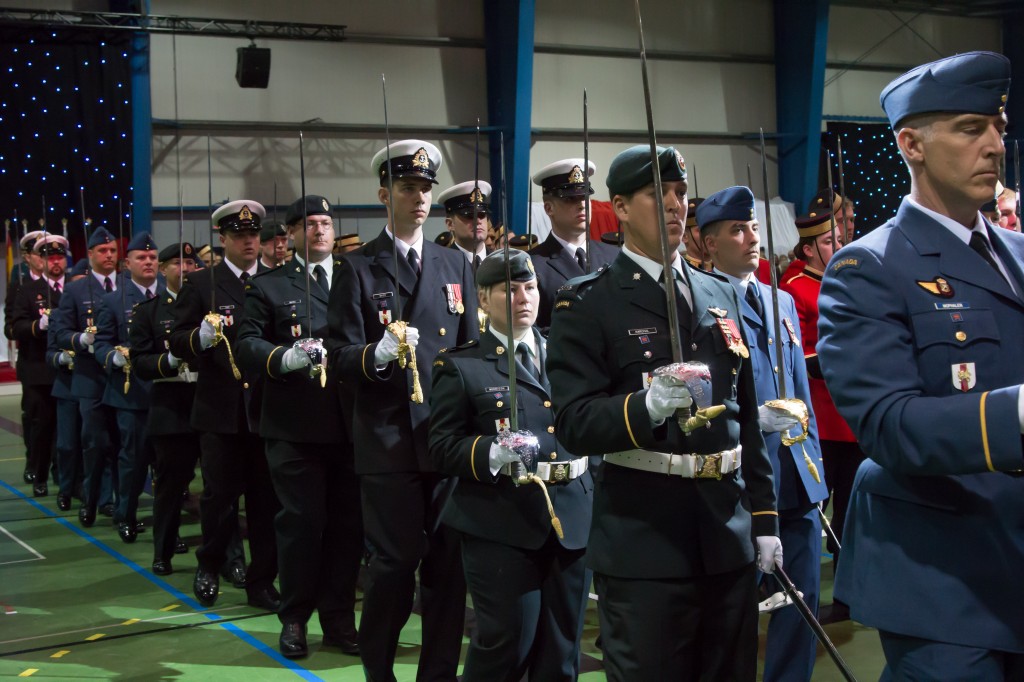 Included in the 219 were 27 University Training Plan Non Commissioned Members (UTPNCM); many of whom have had active duty in the Afghanistan Mission prior to attending RMCC. Some of these UTs (as they are some times fondly called) are mentors for the ROTP / RETP cadets. Often their contributions are taken for granted or even overlooked. Cadets (all years) & staff  are indeed fortunate for the sage advice that they provide almost every day throughout the school year. (Previous UTPNCM article)

Make no mistake the indoor ceremony was no second class event. The reviewing officer, was Chief of Defense Staff, General Tom Lawson. All the top brass accompanied him from all elements of the Canadian Armed Forces. Including: Vice-Admiral M.A.G. Norman; Lieutenant-General M. Hainse; Lieutenant-General Y. Blondin; Lieutenant-General S.A. Beare; Major-General J. R. Ferron; Major–Genral J.G.E. Tremblay; and Major–General R Foster. The commandant punctuated the point to those on parade.  “Their presence signifies how fundamentally important you are to the future of our military.”

BGen Meinzinger touched all the bases in recognizing and thanking everyone involved in ensuring the goals of the 2014 commissioning parade were achieved. For most it was a four year journey; for others it was five or even more. 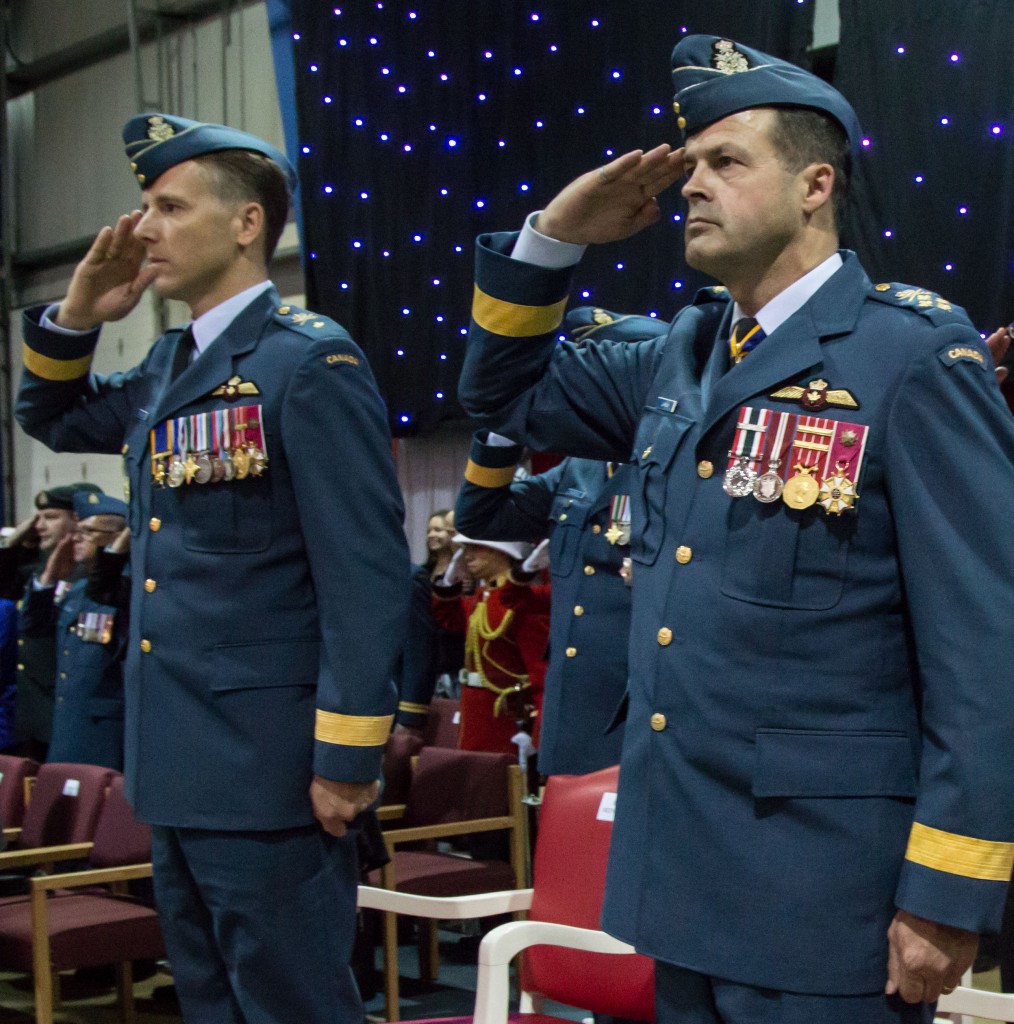 Experiencing his first RMCC commissioning ceremony as commandant, the 1989 college graduate, spoke with passion which came through loudly and clearly: “It can be a challenge to explain to people outside RMCC what it means to be a part of this incredible institution. For ex-cadets and many long serving College team members, there is this profound sense that this College connects you to the very roots of Canada as a nation, to a time perhaps when the ‘Old 18’ paraded on RMCC grounds wearing the College’s majestic Scarlet uniform.”

The CDS, General Lawson was his usual engaging self in speaking to the graduates, their family & friends, and the college faculty & staff. He blended his knowledge concerning the significance of the day – he himself  received his commission at RMCC – 35 years ago; two sons have done the same and he is a former college professor and later the commandant – 2007 – ’09. All in all, if our math is correct, it is the 14th time that he has taken part in or observed the graduation ceremony. 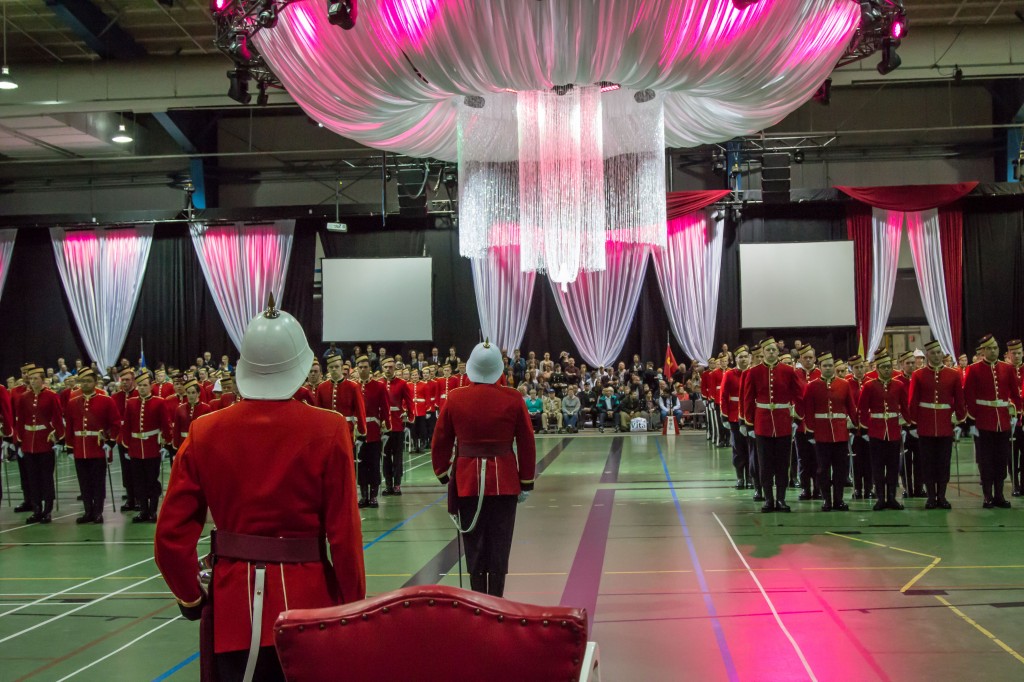 The packed Field House which had been previously decorated for the Grad Ball (scheduled for later that evening) seemed to feed off his combination of mostly humorous and timely sincere messages during the brief but very significant address.

His main words to the 219 rookie officers on parade. “First, being a military officer allows you to toil on the moral high ground, and that is a great responsibility, but at the same time, a wonderful luxury. What I mean by this is that, in contrast to your colleagues in industry, there will be no profit-loss shareholder bottom line to the decisions you will be asked to make.”

The former CF-18 pilot and a former base commander added,  “There is a beauty to this in that your decisions can be made with the purity of calculus of what is best for your troops, for the unit, for the military and for the defence of the nation.” 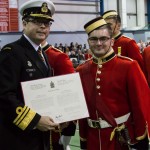 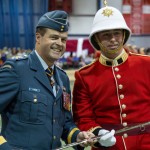 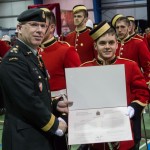 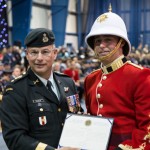 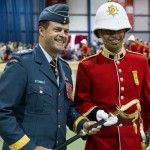 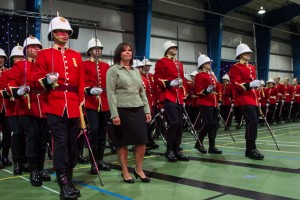 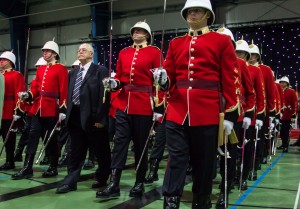 The honour is customarily reserved for civilian or military staff members who have had a major positive impact with the graduating class. The tradition dates back to at least 1952 when RSM J.E. Coggins was chosen by that Class to be their honourary member.

Congratulations to both Chantal and George.

We wish to thank the following officer cadets for their photo support for the Grad parade: Curtis Maynard; Dan Ryan; Erik St-Gelais; and Nicolette Gignac