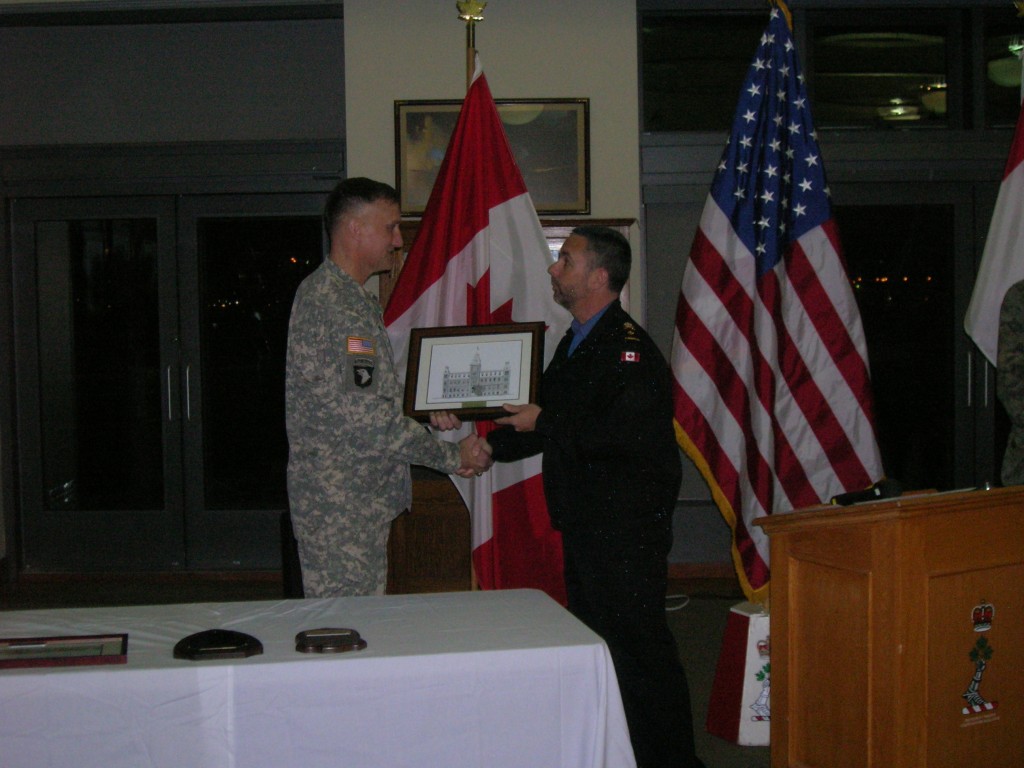 As anticipated, an incredibly busy week around the College. Some highlights from the perspective of the Commandant – Commodore Bill Truelove:

Monday – The week started with a visit by the Formation Chaplain , LCol Guevremont. Padre Guevremont had the opportunity to meet with RMCs padres and to conduct services in our Chapel last Sunday. It was wonderful to have the opportunity to chat with him on a range of issues. We certainly appreciate his support and treasure the tremendous work that RMC’s Padres do each and everyday in support the entire RMC family.

On Monday, we had the pleasure of hosting the senior leadership of RMCSJ for the second CMC Coord Committee meeting. A new initiative launched by the two Commandants, this Committee is focused on ensuring that RMCC and RMCSJ are fully aligned thereby providing the very best training and education, in a seamless manner, to the OCdts/NCdts at both Colleges. Led by their Commandant, Col Francois Pion, the RMCSJ team had representation from all components of the College. Throughout the forenoon, leadership of the various areas of the Colleges, including the Commandants, the Principal and Director of Studies, COSs, DCdts and the RSM’s met separately to discuss issues within their respective areas. On completion, the group gathered for a working luncheon at the SSM following which they met in Plenary in the Senate Chamber to review/capture areas requiring further discussion. It was a pleasure for RMCC to host this very important event and the associated opportunity to continue the excellent level of cooperation and dialogue between both Colleges. The next CMC Coord Committee meeting will occur at RMCSJ in the Fall.

Tuesday – A full slate of internal meetings at the College including focussed budget updates as the College progresses through the final quarter of the Fiscal year. Thanks to the tremendous work and cooperation of the entire College leadership throughout the year, the College is in great fiscal shape as we move through these final months. In parallel, the team is working very hard to get out ahead of next years budget and preparation of the 2011/12 Business Plan.

Wednesday – The College was very privileged to host Cmdre Ron Lloyd, Pacific Fleet Commander and A/Comd MARPAC, along with his team, at the College. Cmdre Lloyd spoke to both the 3rd and 4th year classes during the day and was a guest at the 4th year Naval Mess Dinner that evening. By all accounts, Cmdre Lloyd and his team provided an excellent overview of the Navy and certainly inspired the audiences with the great work being done throughout the fleet and the wonderful opportunities that the Navy presents.

The Commandant and Principal spent most of Wednesday meeting with the RMCC Board of Governors. Chaired by BGen (Ret’d) Don McNamara, the BOG is comprised of leading Academics from across Canada along with representatives from each of the ECSs. The BOG provides oversight of RMCC’s academic programs on behalf of the MND. RMCC is privileged to have the support and advice of this group of distinguished Canadians who are clearly focussed on ensuring that the Cadets of the Royal Military College receive the highest standards of education. The BOG will next meet in Ottawa in April during which time they will have the opportunity to provide an update to Armed Forces Council.

On Wednesday evening, the 4th year Naval Cadets gathered for the first of the 4th year environmental mess dinners. This year, the NCdts were pleased to host RAdm Nigel Greenwood, Assistant Chief of the Maritime Staff, as their guest of Honour. All gathered enjoyed a great evening as they celebrated the 100th Anniversary of the Navy. An unexpected treat was the impromptu flute concerto by RAdm Greenwood, accompanied by the RMC Cadet Band.

Thursday – On Thursday evening the RMC Paladins hit the ice at the Kingston Memorial Centre for the 24th annual Carr-Harris Cup hockey game against Queens. A longstanding rivalry going back 124 years, this competition ranks as the oldest Hockey rivalry in Canada. In a hard fought match which had significant playoff implication for both teams; Queens came out on top by a score of 3-0. I could not be prouder of RMC team who represented the College with professionalism, sportsmanship and determination second to none. They are yet another example of the level of excellence that exists across RMC. We are looking forward to hosting the Silver Anniversary game next year and seeing the cup return to RMC.

As the RMC Commandant noted in his opening remarks, “… this exchange is about many things but most importantly it is about building relationships. It is about recognizing that somewhere down the road these Cadets will serve together in operations somewhere in the world and that the relationships, and associated trust and confidence, that they will have in each other, will enable them to work together to achieve success as those before them have done for decades.”

Fri – Sun – This past weekend was one of the ‘highlight’ weekends of the year – the annual I-81 West Point/RMC exchange weekend. On Thursday evening 130 Cadets from West Point passed 100 Cadets from RMC on the highway as they made the historic trek to visit each others campus. On Friday, the Commandant and Brenda had the great honour of welcoming BGen Bill Rapp, West Point Commandant of Cadets along with his leadership team to RMC. After kickoff ceremonies Friday evening, followed by a wonderful evening at the Brew Pub, the Commandant’s enjoyed an action packed Saturday as cadets from both Colleges engaged in Sports, Debate, Pipes and Drums exchange and above all else, building life long friendships.

The competitions on Saturday were outstanding as the Cadets from both Colleges strove to ‘take home the prize’. When it was all said and done, RMC stood tall in Fencing and TKD while West Point took home the gold in debating and Waterpolo. The Day ended with a wonderful dinner in the CDH following which the cadets gathered in the New Gym to be treated to a performance by the combined Pipes and Drums of both colleges along with RMCs Highland Dancers. With the formal events complete, the cadets enjoyed a final night in Kingston while the leadership teams from both Colleges had the chance to compare notes over “Moose Milk” at the Commandant’s residence.

As Cadets of West Point boarded their buses on Sunday morning, it was clear to me by the smiles on their faces and those of their RMC hosts, that this weekend had been a complete success. Of course, the weekend would not have been possible without a tremendous amount of work by a large number of folks from across the RMC team and I am most appreciative of all their efforts. I’d be remiss if I didn’t particularly note the outstanding efforts of LCdr Hugo Laplante for his tremendous work in coordinating the entire event. Well done Hugo!!

The weekend rounded out with the RMC/Queens/LFHA Historic Hockey matches on the outdoor rink in Kingston. RMC won once again for the 5th time in the last 6 years.  Well done!

Another Successful I-81 exchange and Winter Sports Day!

In what had to be the coldest day in Sports Day history, this year’s I-81 exchange and Cadet Wing Winter Sports Day was filled with much fun-spirited competition. Again this year, the US Military Academy, Westpoint, sent a delegation of their Cadets to take part in the snow covered fun! The games seen this year were a little less snow covered, but fun nonetheless. Ball Hockey on the Parade Square, Football, Dodgeball and the Chain of Command Relay Race were some of the events occurring around the campus.

The opening ceremonies took place Saturday morning with the usual display of Squadron pride at the parade at the KMCSC, 3 Squadron showed off their new flag drawn by III Brendan Alexander. Throughout the course of the day, one could see a great show of comradeship as squadrons came together to take part in the days activities.

In terms of results, 1 Squadron dominated in Ball Hockey over 4 Squadron, 5 Squadron beat out 4 Squadron in Football, 8 Squadron took the cake in Dodgeball over you guessed it, 4 yet again! Better luck next time 4! The all-important Chain of Command Relay race was won by 2 Squadron this year followed at a close second and third by 13 and 7 Squadrons, respectively. Finally the Spirit award went to 13 Sqn partly due to their energetic mascot who took part in most of the activities throughout the day.

The day was not only fun for regular cadets and their Westpoint counterparts but for some the RMC Varsity teams and Recreation clubs as well. This year’s exchange with USMA included a competition between Taekwondo, Fencing, Water polo and Debate while the Pipes & Drums group and the Judo club took part in workshops. The following are the results from each respective competition:

As per tradition, this year’s I-81 Exchange and Winter Sports Day was an excellent display of cadet pride, a lot of fun and a chance to let out the kid in all of us!

ED: We hope to receive a write-up and photos from the RMC cadets who travelled to West Point over the weeskend.  We will include it all in e-Veritas 7 next week.