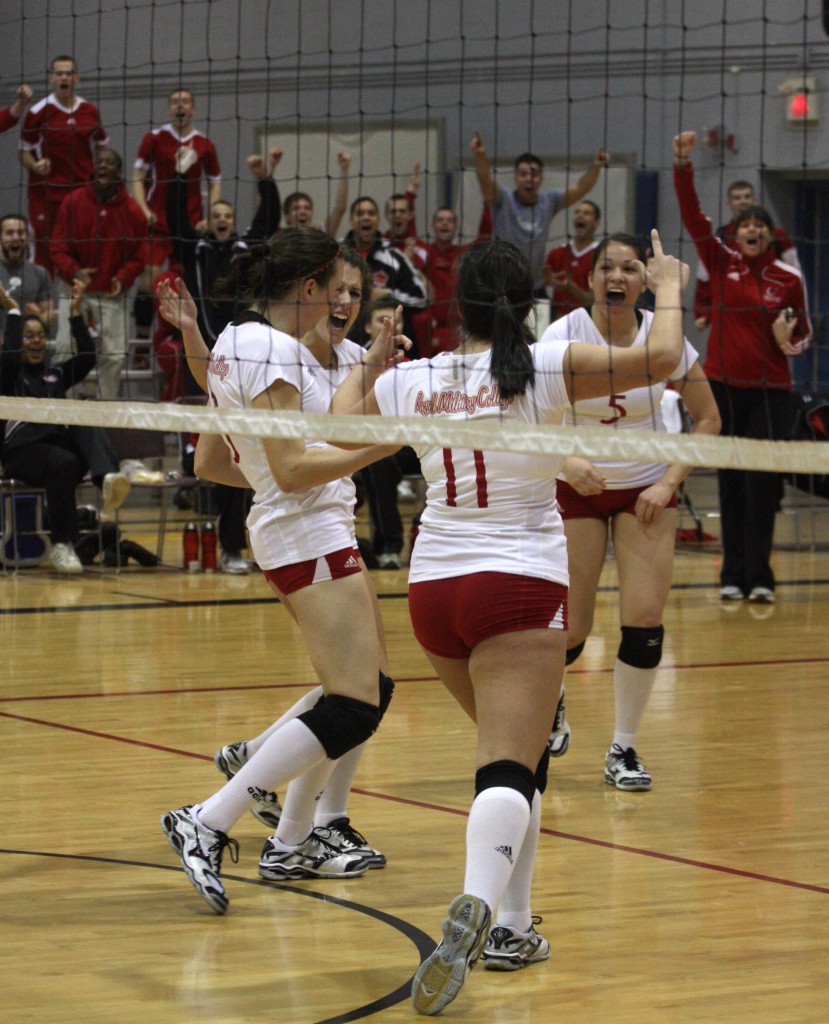 HOW SWEET IT IS!  Photo by: John Sheahan

The RMC Lady Paladins volleyball team went up against the Windsor University Lancers Sunday afternoon. The Paladins came out with a victory over the Lancers with set scores of 25-21, 22-25, 29-27, -25, and 15-6.

The Paladins entered their home court with confidence and showed the Lancers what they were capable of. (I) Norah Collins sustained an injury on the court within the first 10 minutes of the first set which benched her for the rest of the game. Collins persistently supported her team mates while they continued play on the court. The first set was taken with a kind of ease and the ladies walked onto the court for the second set.

The Lancers responded to the Paladins’ set win and the calibre of play went up. Well thought out and executed plays were what kept the Paladins close behind the Lancers in points. (II) Melissa McCoy, deemed ‘The Real McCoy’ during the match, totalled a whopping 22 kills throughout the match and 2 serve aces, which helped the team win. She was able to manoeuvre the ball around the Lancers’ blocks and onto the floor and with each kill, the Lancers would get more frustrated.

With the third set came more spectators than the last. The gym began filling up at a fast rate due to the spreading of the word of how well the ladies were playing. The teams were within 2 points of each other throughout the closing of the set. The cheering of the crowd combined with the on court communication enabled the ladies to come out on top. (I) Kelsey Chang was always prepared and under the ball for many passes. She was a strong leader on the defensive and it showed in how well she played and dug the balls. She also served an ace.

(I) Nicole Shingoose totalled 15 kills throughout the match and 4 serve aces. Shingoose shone on the court alongside her team. Each lady Paladin understood their goal and they knew their purpose on the court. (IV)s Glynis Rogers, who served an ace during the match, and Kim Hymers showed the Lancers whose house they were in with 5 and 4 stuff blocks respectively.

(I) Brianne Baum totalled an amazing number of 43 set assists throughout the match and 6 serve aces. Baum kept the Paladins on their feet and set them up for strong executed plays, which were well cheered on in the stands.

The ladies would like to thank all who were cheering them on during the 5 set match. Your support was very much appreciated and they share their win with you. Congratulations to the Women’s volleyball team for their hard work that demonstrated with their win today. The Lady Paladins would also like to thank all their fans and especially their coaches, Carolyn Welden and Kara Mazerolle. The girls are extremely pleased to announce their first win and they are excited for the upcoming weekend in Lakehead, where they hope to continue their winning. Team Captain (II) Rebecca Fielding is very proud of her team and excited to see the growing support for the varsity program. (II) Mellissa McCoy was player of the game and she says “I am so proud of the team and how far we have come this year. Our win is much deserved for all the effort and hard work we show in practice. Everyone is excited and we anticipate great success this weekend”. Good luck to the Lady Paladins this weekend on their road trip to Lakehead University. The girls also play at Queens on Wednesday, February 10th, 2010. IAN WOOKEY (L) and BRENT FISHER are two IV years who may have played their last vb match at RMC.

IanWookey is known as a sparkplug type of competitor. At 6 feet and 190 lbs, he plays volleyball with strength, power, and grace. The Sarnia, Ontario native is a 5th year player at RMC. In addition to playing varsity this year – he was CSL for first term and just happens to be the Cadet Wing Commander for the winter term.

Brent Fisher contributed much to the team with his steady play and accurate setting, over four seasons. The 5 ‘ 11 “, 165 lb is from Kingston, Ontario.

Word has it Brent may be remaining at RMC to complete a Masters Degree. We’re not sure whether or not he will be back with the team next season or not. He is currently a CSL.

Both gentlemen demonstrated that cadets can combine high calibre varsity sports and its demanding schedule with high level cadet wing responsibilities during their IV Year.

We had the opportunity to work with both these to fine young men during the “attractions phase” of their applications process to RMC.

We watched them develop on the volleyball course which was neat.  We also watched as they both developed and matured into fine young leaders.

Both will do well following graduation.