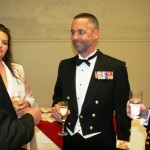 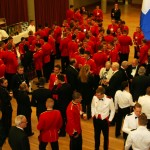 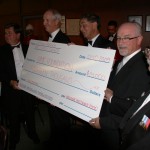 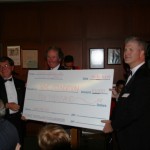 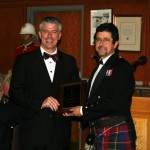 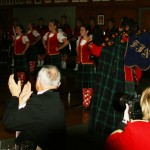 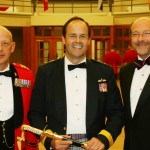 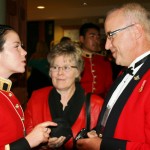 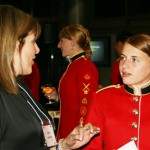 Over 300 people attended the Legacy Dinner last Thursday night. This included Ex cadets, family & friends, and 100 cadets, all of whom were sponsored mostly by Ex cadets, family and corporate sponsors. The cadets represented RMCC, RMCSJ, West Point, USAFA and even four from Australia.   For the first time in the 12 year history of this event the dinner was held in the cadet mess (not the dining hall) on the second floor of Yeo Hall adjacent to the new gym.

Over the years the Legacy Dinner was held at various venues including Yeo Hall, Senior Staff Mess, and once at the Jr ranks club at CFB Kingston – due to the Federal service strike that year. Each time there always seemed to be just something missing to make it a real winner. One year it was the lousy sound system, or the food was not up to par, seating arrangements were poorly done; if it wasn’t one thing it was another!

The cadet wing colour party set the tone right away as they marched in the colours in true military fashion as the 300+ guests watched in appreciation as they performed their synchronized maneuvers without a fault.

The vast majority of those attending  were in agreement that the layout, media props, and the entire set-up was the best yet.   7855 Paul Hession (CMR RMC 1969), a longtime attendee at these dinners,  summed it up best: “I believe we have turned the corner, the set-up was ideal, entertainment provided by the cadets was superb, and the service and menu were great.”  The comments from this former Redmen basketball star reflected fairly well the views of most people we spoke to who paid $150.00 each to support this black tie fundraiser.

A tip of the hat is due to Glenn MacDonald, Vice President of the RMC Foundation who had the vision to recognize the outstanding potential of this venue.  Glenn had to convince a number of doubting fellow committee members early in the organization stage that the Cadet Mess was the place to go to to have a first class event.

Once the other committee  members were on board it was full steam ahead. Glenn Allen (photo at left), committee chair, John Plante, and John Cowan all provided  significant leadership.  Lesley Muirhead, cadet mess manager, was the key in so many areas – especially lining up the caterer, organizing the bar and meal services, along with solid suggestions that added a nice touch.  Jennifer Jordan, foundation office manager, was the administrative coordinator.  Leaf Tremback tracked ticket sales, made all the key seating arrangements, and was the go-to-guy in organizing work parties that set-up, tore down and handled the hosting and security concerns.  Truly a team effort!

Glenn MacDonald was the architect of the script that proved to be both entertaining and a showcase of the many talents available within the cadet wing.  The RMC stage band under the direction of MWO Martin Huppé provided smooth and timely music and pipes & drums.  The Master of Ceremonies, 17192 Sylvain LeBlanc (CMR 1990), was clear and crisp in both official languages and mixed wit with class that captured the attention of all in attendance during the three hour event.

The guest speaker of the evening was 3528 Paul Manson (RRMC RMC 1956) and was his usual eloquent self. Former RMC commandant, 12192 MGen Tom Lawson (RMC 1979) received a special award.  12944 Andre Durand received the RMC Clubs Presidents plaque, and 11623 John Carswell (CMR RMC 1978) was the recipient of the volunteer of the year award.

The Legacy Dinner is now well entrenched as a fixture on the reunion weekend schedule.  For those returning next year for their class reunion – they would be wise to think ahead and plan to include the Legacy Dinner as part of their itinerary.

Listen up; I’m on Send your on Receive!

So I was fortunate enough to be invited to the Legacy Dinner this past Thursday. It was a nice function; the RMC bands played and awards and recognitions for outstanding achievements were given out. As I was sitting at my table, enjoying my supper, I was asked to write about what I thought about the Legacy Dinner and that’s why this week’s article has a different feel to it.

Honestly, before I got there I thought it was going to be just another fancy mess dinner. I was wrong; the legacy dinner is far more than that. The event itself shows the appreciation that RMC has for its donors. I was in the same room as the men and women who make everything we do here at our College possible. The more time I spent listening to these influential ex-cadets, the more I realized that RMC would be virtually non-existent without their support. Here, at the dinner, these distinguished members meet and discuss the future of RMC. One particular speech that stuck to me was from Mr. Al Roberts. I quote him in saying “for the past 130 years, the college has evolved to meet the times”. The ex-cadets at the Legacy Dinner are the ones who are controlling the changes that we see at RMC; this was their college before, and now it’s ours. They love this place and they just want to make sure we have the same unique experience as they did so long ago.