In October 2015, LCol Renahan, a 1994 RMC graduate, took over the position of Director of Cadets (DCdts) at RMC. Having only been here a short time, he

has not yet had the opportunity to introduce himself to the Cadet Wing. Eager to discover and tell his story, this eager first year interviewed LCol Renahan with the intention of introducing the Cadet Wing to their new Commanding Officer.

LCol Renahan’s first introduction to the military was as an Army Cadet at the age of 15. After serving as a cadet for two years, he joined the reserves as a rifleman. His experiences in both the cadets and the reserves were “enjoyable enough that it made [him] want to do something more full time.” That, and his interest in the engineering field led to him begin attending the Royal Military College of Canada in 1990. He chose a career as an Armoured Officer because he “liked the army life” and “the frontline operational nature of it.”

While at RMC, LCol Renahan, a Montreal native who spent his teenage years in Toronto, earned a degree in Chemicals and Materials Engineering and played varsity rugby throughout his four years of school. He made lifelong friends while at the college and still keeps in regular contact with some member of his recruit or FYOP flight. According to him, “the complete package” offered by RMC is key to developing capable officers. Working hard to meet the standards of the four pillars is challenging, but it’s the only way to “get the full experience” and lay the foundation for success as a CAF officer. Furthermore, “the leadership level model, the daily routine and the regulations that govern the daily life of the cadet are there to help” all cadets, with tighter rules to help first years make the adjustment. Recalling his experience as an engineering student, LCol Renahan believes that practices like limited After Duty Passes and enforced study hours help make “an overwhelming workload” manageable. A distinct advantage of attending RMC is having the opportunity to serve in a chain of command. LCol Renahan says that RMC helps prepare officers for the “time spent in garrison doing personnel administration.” He advises cadets to “maximize the advantages you have here” to become a well-rounded leader, develop new skills and make lasting friendships.

After graduating from RMC in 1994, LCol Renahan went to Gagetown to complete his Phase 4 Armour training. Upon completing his training in August, he “packed the car and drove from Gagetown to Petawawa” where he joined the Royal Canadian Dragoons as an armoured reconnaissance troop leader. He arrived just as the unit was “hitting its stride to go on an operational mission” in Bosnia. Having the opportunity to lead troops was “a great learning experience” and helped him improve his abilities as an officer. The soldiers he led were instrumental in his “learning and development as an armoured officer.” While serving as a troop leader, LCol Renahan discovered that leading “talented young Canadians” was a rewarding experience. 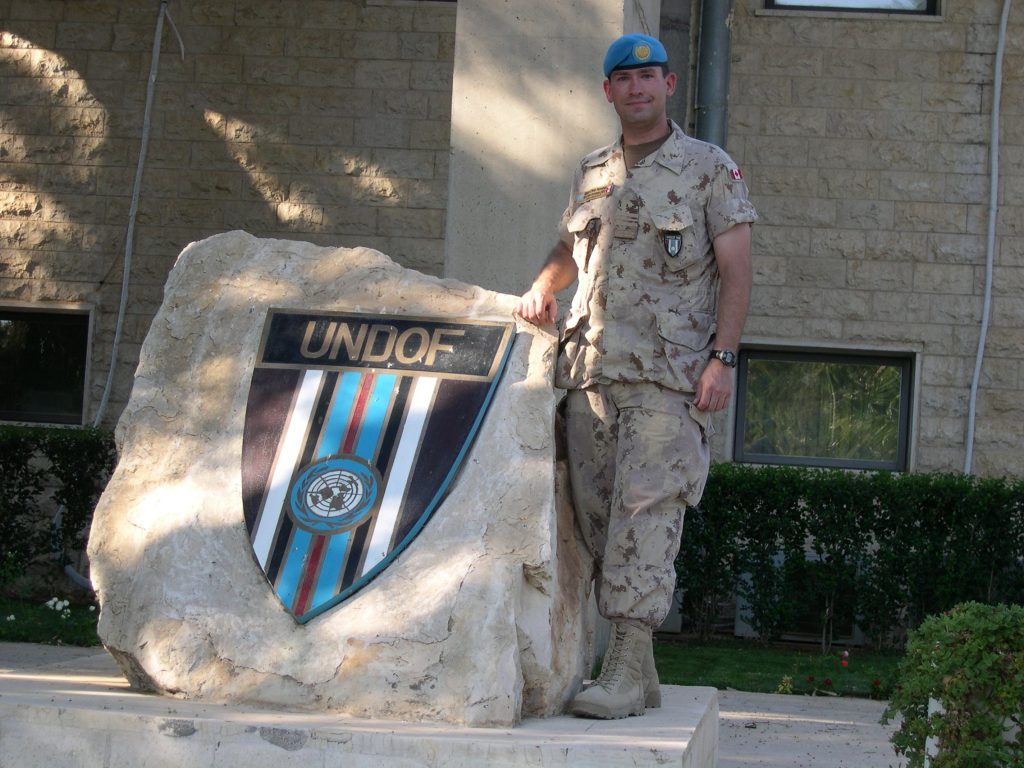 Following his time as a troop leader, LCol Renahan, a 2011 graduate from the US Army Command and General Staff College, followed what he describes as “the typical career path for an armoured officer,” which included time as the Director of Land Requirements 3 – Armoured Fighting Vehicles Section Head a former, Military Assistant to the Force Commander, United Nations Disengagement Observer Force and time as an Armoured Squadron Commander for the Royal Canadian Dragoons.

Following his eventful career as an armoured officer, LCol Renahan was given the opportunity to return to RMC in October 2015. As the Director of Cadets, he describes his job as “overlooking the smooth operation of the military component” and is “a key part of the integration of the other components” into the ROTP. Currently, his main focus is to “develop a healthy routine” as he is in the “early stages of the job.” His days are mostly spent meeting with key individuals and completing paperwork to ensure the success of the 1034 cadets placed under his command. Despite the long hours spent managing careers, he recognizes that “the most important opportunities [he] would have would be to interact with the cadet wing.” He wishes to meet the interesting and accomplished individuals who make up the cadet wing. Whether commanding an armoured reconnaissance troop of 20 men or a unit of 1000, it is important for a commander to be familiar with those under their command. LCol Renahan looks forward to having more “face to face” interactions and “hearing what the cadet wing has to say” in the coming months.

Finding motivation to undertake the enormous challenges that come with being the DCdts comes easily to LCol Renahan who has “very fond of memories of the College” and he “enjoys being in this environment.” His time as an RMC cadet certainly helped him become accustomed to life at the College, however, he concedes that his experience is “20 years out of date.” This only adds to the already spectacular challenge of being the DCdts. LCol Renahan also says that he has to learn to “get with the times” and adjust to the RMC of 2016. He needs to relearn to get a “solid feel for the culture of the college from the perspective of the cadet wing.” One of the most striking changes between the RMC of today and that of 1994 is the Leadership Level progression model. According to LCol Renahan, the new Leadership Level model provides “incentives for cadets to achieve the AFAN qualification.”(Note: AFAN is the qualification for achievement in the 4 pillars (including earning Bs in French and passing the PPT).

Part of his job is to continue to oversee the smooth implantation of the new Leadership Level progression model. LCol Renahan’s main objective in the coming months is to “help contribute to make [RMC] a positive experience” for the cadets.

Becoming accustomed to the culture of RMC as a first year cadet is a daunting challenge. FYOP pushes first year flights to their perceived limit and forces to come together and become a team. Afterwards, the challenges of RMC only become more difficult. Having to excel in the four college pillars and adhere to the colleges high standards require first years to adjust quickly and develop good habits in order to stay afloat. These challenges are more difficult for those who are living away from home for the first time in their lives. Becoming accustomed to a new environment always takes time. All things come in due time. As future CAF officers, RMC cadets will constantly have to face the challenge of a new beginning. No matter the trade, the CAF will always require its members to develop new skills and undertake new challenges. Even as at the rank of LCol, the challenge of adjusting to a new work environment endures. However, LCol Renahan, knowing that his job is consequential to the well-being of over 1000 aspiring officers, will do what it takes to succeed.