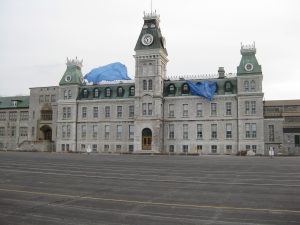 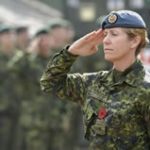 While it is always an inspiration to view the Canada flag waving majestically above the MacKenzie clock tower, these days, if you allow your view to drop to ground level at the MacKenzie Building you’re sure to notice the fencing, dust, workers and material that is typical of a busy construction site. You may wonder, “What is happening to the MacKenzie Building, and why so close to Grad?”

This grand RMC signature building, constructed in 1876, is receiving some well deserved TLC under the MacKenzie Basement Renovation Project. The basement is being renovated, so that it may be used for administration and classrooms. The building problems being remedied are quite extensive. The foundation was leaking because of the buildup of ground water outside the building. The space below the floor was originally built to allow water to flow through. However, over the years, water had pooled and the floor had rotted. The structural integrity of the walls had deteriorated due to rot. The heating, electrical and telecommunications systems did not function well enough to meet modern standards.

Work started with a controlled demolition operation in 2007. When the wall and floor coverings were removed, some building secrets emerged. For instance the floor joists were made from large cedar logs, many of which still had their original bark. Although they were 140 years old, some were in excellent condition. However most of the joists had suffered exposure to water and were rotten. Old iron fireplace mantels were revealed as well as beautiful wainscoting and tin ceilings typical of the era. When the exterior of the building was excavated rusted and damaged water and sewer lines were discovered.

The renovation not only will create a pleasant working environment, it will retain areas with special features in character with this heritage gem. For instance, one room that was found to be in the best condition is being restored to the original state. It will include wainscoting, a tin ceiling, wood floor and a glass panel, through which anyone interested in heritage architecture can view the original cedar log floor joists. Limestone walls will be featured in many areas, including a meeting room located under the base of the Clock Tower.

”What is happening to the MacKenzie building…?” according to Saint-Jean…