“A modern, autonomous, and thoroughly trained Air Force in being at all times will not be sufficient, but without it, there can be no national security.”

“Offence is the essence of strategic air power.”

“We must not get soft. War must be destructive and to a certain extent ruthless and inhuman.” 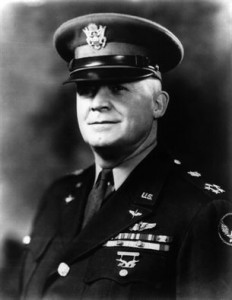 General of the Air Force. Pioneer airman who was taught to fly by the Wright Brothers, and commander of Army Air Forces in victory over Germany and Japan in World War II: born Gladwyne, Pa., June 25, 1886, died Sonoma, Calif., Jan. 15, 1950. “Hap” Arnold, as he was fondly known and called, dating from his early days at West Point, was in the class of 1907 at the U.S. Military Academy. From then on his life paralleled the growth of America’s air power and he personally contributed to most of the major milestones of development during the long period until he retired in 1946. Three years later, by act of Congress, he received permanent five-star rank as general of the Air Force, the first such commission ever granted.

Arnold initially was assigned to the 29th Infantry, serving with it in the Philippine Islands for two years. He returned home for two-and-a-half-years’ duty at Governors Island, N.Y. until April 1911 when he was detailed to the Signal Corps and sent to Dayton, Ohio for instructions in the Wright biplane. The Wright Brothers, who had made their first flight in 1903, personally instructed him for two months, after which he soloed and became one of the earliest military aviators in June 1911.

Arnold then was assigned to teach other flyers at the Signal Corps aviation school at College Park, Md. The school was moved to Augusta, Ga., in November, and he served there until April 1912 when he went back to College Park for flight duty. On June 1, 1912, he established a new altitude record by piloting a Burgess-Wright airplane to a height of 6,540 feet. He also took part in air maneuvers in New York and Connecticut and set several records. On Oct. 9, 1912, he won the first MacKay Trophy ever awarded for a reconnaissance flight on a triangular course from College Park to Washington Barracks, D.C. to Fort Myer, Va., and return to College Park, flying the early type of Wright biplane with its 40 horsepower engine revolving two propellers by the chain-and-sprocket method.

During the latter part of 1912 Arnold went to Fort Riley, Kan., as an aerial observer of Field Artillery firing and was the first military aviator to use radio to report his observations. In November 1912 he was assigned to the Office of the Chief Signal Officer in Washington, where he was promoted to first lieutenant in April 1913. In September he went back to the 13th Infantry. He stayed there until March 1916 and came home for two months at Madison Barracks, N.Y., before going back to aviation duties in May 1916, with promotion to captain and duty at the new flying school at San Diego, Calif.

In February 1917 Arnold went to Panama to organize an air service there, which he commanded until May 1917. As the U.S. entered World War I, he was called back to Washington, promoted to major June 17, 1917, and on Aug. 5 was promoted to full colonel. He was in charge of Information Service in the Aviation Division of the Signal Corps. When the Office of Military Aeronautics was created, Arnold became assistant executive officer and in February 1918 was named assistant director. He went to France in November 1918 at war’s end on an inspection tour of aviation activities. He returned in January 1919 as supervisor of the Air Service at Coronado, Calif., and as air officer of the 9th Corps Area at the Presidio at San Francisco.

In June 1920 Arnold went back to captain’s grade, but next month was promoted to major, where he remained until 1931. In October 1922 he became commanding officer of Rockwell Field, Calif., serving two years. He graduated from the Army Industrial College in 1925 and became chief of the Information Division in the Office of the Chief of Air Corps. He testified on behalf of General Billy Mitchell during the famed courts-martial in the fall of 1925 when Mitchell was found guilty of insubordination. Arnold devotedly shared Mitchell’s beliefs in the strategic capability of the airplane and urged an independent air arm which he (Arnold) lived to see authorized in 1947. He next went to Fort Riley, Kan., where he commanded Air Corps troops at Marshall Field until 1928. In June 1929 he completed the Command and General Staff School at Fort Leavenworth and was assigned as commanding officer of the air depot at Fairfield, Ohio.

Arnold was promoted to lieutenant colonel in February 1931 as commanding officer of March Field Calf. In July and August 1934 he personally organized and led a flight of 10 Martin B-10 bombers in a round-trip record flight from Washington, D.C. to Fairbanks, Alaska, and next year received his second Mackay Trophy for this achievement. In February 1935 Arnold was jumped two grades to brigadier general and put in command of the 1st Wing of General Headquarters Air Force at March Field, Calif. He was gaining a reputation as a bomber man, having encouraged development of the B-17 Flying Fortress and B-24 Liberator four-engine planes, and the precision training of crewmembers. In January 1936 he became assistant to the chief of Air Corps in Washington and on Sept. 29, 1938 was promoted to major general and appointed chief of Air Corps.

His title was changed to chief of the Army Air Forces on June 30, 1941, and that December he got a third star. When the War Department General Staff was organized in March 1942 Arnold became commanding general of Army Air Forces. Prior to and all during World War II, he directed air activities for the nation’s global war against Germany and Japan. Under him the air arm grew from 22,000 officers and men with 3,900 planes to nearly 2,500,000 men and 75,000 aircraft. Early in 1943 Arnold made a 35,000-mile tour of North Africa, Middle East, India and China, and attended the Casablanca Conferences. In March 1943 he was promoted to four-star general. He suffered a heart attack in 1945 as the war drew to a close, attributed by his doctors to overwork.

He retired from the service June 30, 1946, after earning most of the honors a nation can give a world military leader of his stature, including three Distinguished Service crosses, the Distinguished Flying Cross, Air Medal and decorations from Morocco, Brazil, Yugoslavia, Peru, France, Mexico and Great Britain. During his long career Arnold wrote a number of books, including early boys’ books to create interest among youth in flying, and the post-World War II autobiography “Global Mission,” an accurate account of Air Force activities in the war and his own life. On May 7, 1949 Hap Arnold was appointed the first general of the Air Force, five-star rank, by the U.S. Congress.

He died at his ranch home, Valley of the Moon, near Sonoma, Calif., Jan. 15, 1950. Hap Arnold’s name is perpetuated at the Arnold Engineering Development Center at Tullahoma, Tenn.