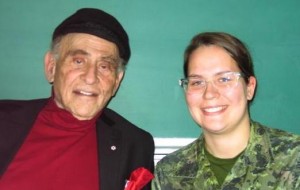 On Wednesday February 6, English 100, English 110, and English 210 had the privilege of hearing a presentation by Mr. Peter C Newman, celebrated Canadian author and journalist. He has sold over 2 million books and has written for publications such as the Financial Post, The Toronto Star, and Maclean’s Magazine. Mr. Newman is currently RMC’s writer in residence.

Over 300 English students had the honour of hearing Mr. Newman’s idea of what makes stories interesting. The first part of his presentation focused on the notion of “making the facts dance”. Mr. Newman believes that, as a writer, one is always in competition for someone’s time; a century ago, reading had a monopoly on people’s time, but with the ever- growing presence of technology in our lives, literature and reading are losing their stake hold in our daily activities. Therefore, the writer’s responsibility is to provide the reader with a “literary choreography” which will intrigue, entertain, and inform the reader. Mr. Newman sees the writer’s ability to engage their reader as dependent on his or her ability to “mix facts with feelings”. He compared a writer’s craft to that of other artists: painters use paint, singers use their voice, and writers use their hearts and “guts”. Human emotions should be at the center of the written truth, in order to affect a person, for, according to Mr. Newman, “emotions are stronger than thinking”. Along with the necessary emotions, a writer should be authentic and true; he or she must be true to the observations, facts, and self. Mr. Newman stated that the written word itself contains a given authority; therefore, writers should provide authenticity that people trust.

As an immigrant to Canada from the former Czechoslovakia, Mr. Newman spoke of the importance of knowing one’s country and subsequently sharing one’s relationship with it through writing. Mr. Newman’s bibliography centres on Canadian issues, be it politics, economics, or identity. He described his affinity to Canada as him “let[ting]the writing grow out of the land under your feet”. Each of his works has become a display of his relationship and understanding of Canada. Using Canada as a starting point for his work has allowed him to provide works of great authenticity, emotion, and truth.

Following his discussion of how to make stories interesting, Mr. Newman spoke of the art of conducting and writing an interview. Throughout his career Mr. Newman has interviewed many affluent and influential Canadians, and he shared some of his interview techniques. The key to a successful interview is to first put the person at ease; he recommended starting by speaking about oneself or asking a question unrelated to the topic of the interview. He stated that he never records the first 20-30 minutes of an interview, for they are never about the desired topics. Along with a discreet and unobtrusive dress, a good interviewer must be able to read his guest’s body language. According the Mr. Newman, Steven Harper won his current majority government through his use of strong, assertive, and confident body language during the Leader’s debate and his campaign. A technique he once successfully used, but does not recommend to all, was he pretended to fall asleep during an interview! Being bold, daring, and creative in his interview techniques have allowed Mr. Newman to write insightful interviews with numerous Canadians. After his talk, Mr. Newman opened the floor to questions. The questions posed included one about his personal writing process. Mr. Newman said that he always writes to music. He either plays music very loudly through speakers or in head phones. The classical or jazz music he listens to gives him energy and adds rhythm to his writing. The music allows him to concentrate solely on his work and drives out everything else around him. The time signatures of the music become the beat of his own work.

Along with describing his personal process, Mr. Newman left the English students with three final tips and tricks to writing well. The first, and most important, part of writing well is to pay attention to the structure of one’s work. The structure shapes the piece and shapes the second important component – the narrative arc. The writer must stay true to the narrative arc and structure of the story. One cannot travel from a farm to the sea in a single scene without adequate structure and narrative technique. The final trick to good writing lies in the editing and revision process. Mr. Newman recommended having a friend read one’s work out loud. At times, one is “married” to one’s own work, and the separation created by another voice reading out loud will point out the flaws one cannot see. Also, a good writer will seek and use feedback on his or her work. Mr. Newman uses friends or fellow authors to help perfect his ideas.

Mr. Newman’s presentation was greatly appreciated, and his discussion of his writing and the writing process was insightful and entertaining. Mr. Newman definitely made the facts of writing “dance” to all those present.