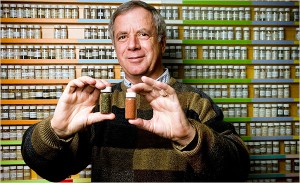 Photo: Leah Nash
EYE ON THE BEACH Rob Holman of Oregon State University with sand samples from nearly 1,000 sites around the world.

The World, Grain by Grain

Rob Holman, a coastal oceanographer from Oregon State University, has collected more than 860 samples of sand, from all continents.

A version of this article appeared in print on January 6, 2009, on page D1 of the New York Times edition