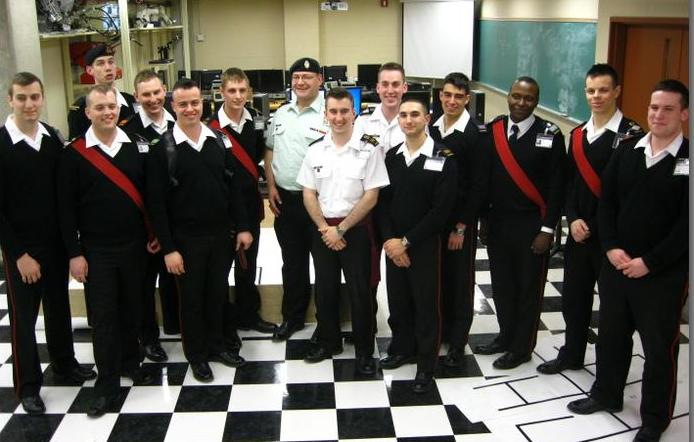 This competition marks the end of the year-long design project course that allows students to demonstrate their ability to apply the electrical and computer engineering knowledge, skills, and techniques learnt in their program of studies to design and build a working product.

Each group of two students designed an electrical or computer system starting with the definition of system requirements, followed by a preliminary and a detailed design, after which they construct a prototype system and test its actual performance against the original requirements.

Seven 4th year teams from within the Electrical and Computer Engineering Department competed and were evaluated on the presentation of the project design, their implementation and the technical difficulty. Training with the Quiet Professionals

The opportunity to bridge the chasm into the special operations community is something that very few members of the conventional military, and especially cadets at the Royal Military College of Canada, will ever experience. From March 27th to 31st, the 2014 Sandhurst Team spent four days at CFB Petawawa training with the Canadian Special Operations Regiment (CSOR). The training package revolved around the development of shooting proficiency with the C7 rifle and Beretta M9 pistol, with the intent to prepare the team for the marksmanship component of the 2014 Sandhurst Competition, which will be held at USMA West Point on April 11th and 12th. Upon our arrival at the CSOR compound, there was an air of excitement amidst the members of the team. During our brief introduction, a group of MultiCam-clad operators quietly observed us as we entered the building. Over the next several days, this detachment of laconic warriors would provide us with skills, feedback, and experiences that will undoubtedly serve the team during the competition at West Point and throughout our future careers.

The theme of the weekend was shooting. Each morning, after an early breakfast, the team headed out into the training area. After setting up targets and completing the range safety brief, we were often shooting by 10h30 each morning, and would continue training until about 16h00 each day. Over three days on the range, the 2014 Sandhurst Team shot 11,000 rounds of 5.56 ammunition and over 8,000 rounds of 9mm pistol ammunition. Needless to say, the opportunity to shoot such a prodigious volume of ammunition under the supervision and expertise of special forces operators was extraordinary. On the firing line, each member of our team often had one-on-one coaching from a CSOR operator. At some points, there were cadets who had one sniper-qualified operator spotting their shots with a twenty-five power scope on their left, and another operator expertly critiquing their position and trigger-squeeze to their right. The professionalism and mastery of the operators was astounding. They constantly provided proactive feedback with a relaxed and positive mentality, and were truly invested in our skill-development.

This is the second time that the RMCC Sandhurst Team has trained with the Canadian Special Operations Regiment, and it is expected that this legacy of cooperation will continue. As a CSOR company commander mentioned prior to the team’s departure, the relationship between the Sandhurst Team and CSOR is reciprocal. CSOR is constantly looking for ways to demonstrate the capabilities of special operations forces, and by providing the Sandhurst Team with comprehensive training packages, they are giving back to the institution of the Canadian Armed Forces, practicing and refining their own training techniques, and demonstrating their capabilities to the next generation of officers. The Sandhurst Team returned from Petawawa with new skills and experiences, and will soon be departing for West Point to represent the Royal Military College of Canada, the Canadian Armed Forces, and Canada at the 2014 Sandhurst Competition.

Members of the team greatly appreciate the financial support provided and administered through the RMC Foundation.