Caption: BGen Meinzinger takes the salute during a Memorial for two staff members and an OCdt who have all passed away over the past few weeks.

Dr. Neilson’s reputation as a top notch History researcher and writer was recognized widely at RMCC, with his prolific writing benefiting historical scholarship as a whole.

Rusmir Tanovic’s intimacy with bridge engineering benefited many engineering students over the last 20 years, but it will be his thoughtful and expert teaching style that many remember most.

The Commandant, BGen Meinzinger was deeply touched by the three losses. Recalling his meeting and talking with OCdt Fanstone.

“I had occasion to spend time with OCdt Fanstone at a local hockey game recently. He was a man with a big smile that loved his hockey and was surrounded by loyal and dedicated friends.

His loss, along with the losses of Dr. Neilson and Dr. Tanovic has profoundly impacted the College.”

Following the memorial the cadets carried out a dress rehearsal in preparation of the Commissioning Parade which was scheduled two days later. A number of  awards to deserving staff and cadets were also presented at the rehearsal.  To see more photos from this Memorial and Dress Rehearsal go here. 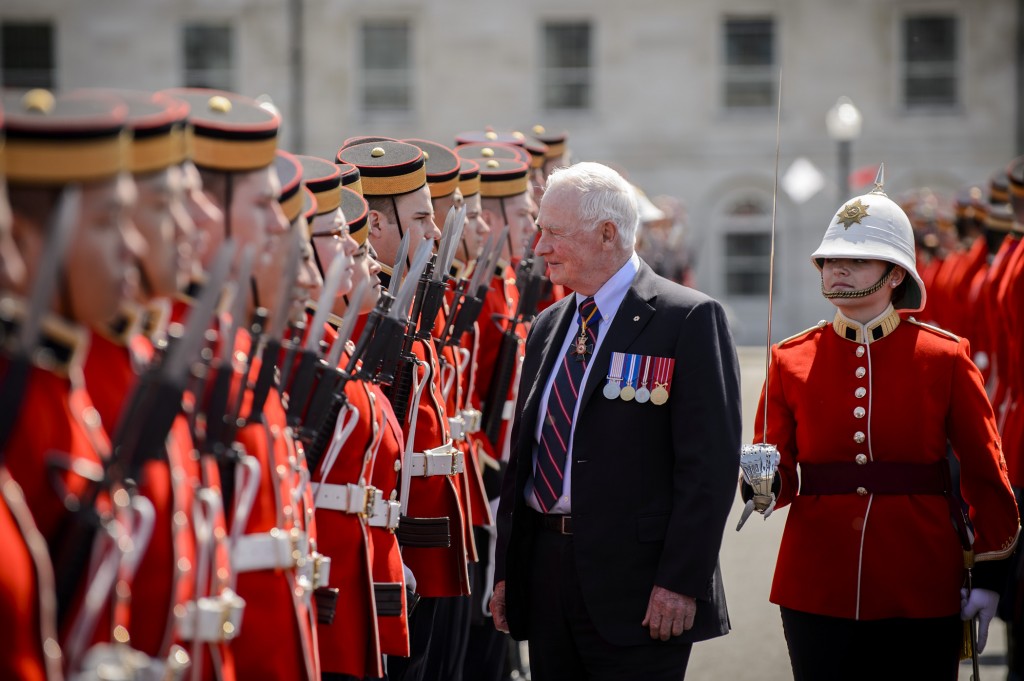 The college was in for a surprise treat last Thursday morning. Upon his arrival at 11 a.m., the Governor General  inspected a guard of honour composed of 100 officer cadets on the parade square. He also attended a special lunch at the Senior Staff Mess. Following the presentation of his honorary degree, His Excellency delivered the convocation address to graduating officer cadets, as well as master’s and doctoral degree recipients. Caption: The Class of 1964, on joining the OLD Brigade, assumed a responsibility, in association with The RMC Foundation, to sponsor the Sandhurst Team. As part of this obligation, the Class hosts a Meet and Greet with the team and Class members. This has evolved over the past 5 years to take the form of a luncheon during Grad Week. 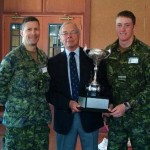 The luncheon provided a great opportunity to present the 1st Canadian Parachute Battalion trophy to the most outstanding member of the 2015 Sandhurst Team. 26941 OCdt (II) David Chadwick was deemed by his peers to be the most outstanding member of the team. During his first year on the team, OCdt Chadwick truly embodied the spirit of teamwork and excellence and showed a level of maturity and skill that was beyond the expectations of his teammates. (Photo Left) – LCol Popov , Bob Harrison, David Chadwick.

Two of the team’s trainers, Tomasz Deren and Stephen Mitchell, were also recognized by 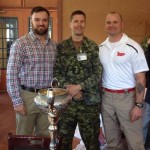 the Director of Cadets for their outstanding work and dedication to the team. Throughout the training season, Steve and Tomasz committed countless hours of their own time towards improving the team’s physical capacity and ensured that the team would be ready for any obstacle they faced during the competition. In appreciation of their efforts, LCol Popov presented both with the prestigious Sandhurst pin. 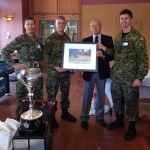 LCol Popov also took the time to present the Sandhurst Team with a framed photo that was taken by the RMC Artist-in-Residence, Mr. Chris Miner. The photo was taken during one of the team’s training sessions, and will be proudly displayed in the team room for years to come.

It is no secret that the RMC Sandhurst Team would not exist without the support of many friends who work tirelessly behind the scenes to ensure that the members of the team are given every opportunity to achieve excellence. The support from the Class of ’64 is especially tangible, and directly enhances the lives of the cadets who make up the Sandhurst Team. The luncheon last Tuesday was a great opportunity for the members of the team to show their appreciation to the Class of ’64 and was a perfect way to end the 2015 season and say farewell to our graduating members. Those members who may be returning to the Sandhurst Team next year are looking forward to the continued support of the Class of ’64 and hope to see their familiar faces again at the luncheon in 2016.

Former Otter Squadron member gets his due 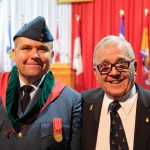 OCdt M1013 Maurice (Mo) Smart was one of over 300 students who made it on the stage last Thursday (14 May) at Convocation. He received a General Science Degree. Well sort of. Actually, he was conferred 26 June 2014.

Over the past 20 months he has worked with us at Panet House. He has been performing a myriad of duties, within the Club, producing staff work, at a level one would expect from a Jr. Officer.

He ended up in Holding Platoon after experiencing academic difficulty on one course while in III Year – Otter Squadron. For about a year and a half he has been in limbo concerning his military future.

While being employed at Panet House and on his own initiative picked up a requisite course or two to earn his Science Degree.

By this time, he was too late for the 2014 RMC Spring Convocation. He was given two options: a) Go to Toronto and receive the Degree in person; or b) it could be mailed to him. Even though he was on RMCC strength and resides in Kingston.

Mo is a very quiet individual. Not one to make a fuss or to cause waves. He chose Option b.

When given the opportunity to actually go on the stage last week and be officially recognized for his accomplishments – he accepted.

In regards, to his military future, that too has been a ‘can of worms’. Twenty months in Holding Platoon would destroy most people. As we mentioned earlier – he is not one to make a fuss. However, we are confident that too will have a happy ending.