Tony O, Does It Again! 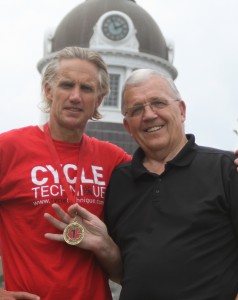 (Photo left by 13181 John Sheahan) – Tony with Bill Oliver who is flashing the first place medal which was won by Tony.

Most Ex Cadets and / or staff members who were in and or around the college over the past 20 plus years or so are well aware of what this gentleman is capable of when it comes to these type of competitions.

It is not the intention of this article to list ALL his accomplishments – a small sample of some of his results are here.

Something about Tony has always impressed us much more than his incredible finishes is the positive impact that we have witnessed numerous times with officer cadets.

Not all officer cadets, but the ones that not only want to achieve but those who dare to over-achieve. We have watched it many times. We will not spotlight any of these individuals because it would not be fair to mention them without their permission. But I do have a drawer full of names.

We previously mentioned that Tony has been around the college for quite a few years. This includes stints as: Squadron Commander; Division Commander; Staff Officer at Canadian Defence Academy, RMCC Chief Of Staff and his last position was Director of Cadets – about four back.  How time flys.

Not everyone is a big fan of Tony. His in-your-face approach can turn some type of people off; even intimidate at times; however, for those who dare to tread outside their comfort zone – he has been and still is an inspiration.

We can vividly recall an incident back when he was not even on the college staff. He was approached by a PSP fitness instructor to give a ‘pep’ talk to cadets who were on compulsory remedial training. Well over 200 in total. Most were failures – even IV Years, a few were legitimate medicals.

This compulsory class was scheduled for around 1630 hrs three or fours days a week. This meant if you were on Remedial – no IMs & no shaft jobs etc. In short, this was a pretty cozy group. One could even say – country club.

By the time, Tony gave his pep talk which brought many within the group to tears. Some of these Cadets were indignant & upset, had visits to the padre. Military & faculty staffs also got involved; mostly all very critical to not only the message but the manner in which it was delivered by Tony O’Keeffe. Something special about Tony – he is either loved or not loved – usually by just being himself. What you see is what you get.

Not all the cadets went off whining to the Chain-of-Command.

We know this as a fact, because many of them dropped by Panet House and / or we just talked on casual basis, here & there.

The Tony talk was a wake-up call for this group. A number of them quickly got themselves out of the country club atmosphere. Some are now even running marathons, competing in Ironman competitions and other high level rigors events. Even better they are experiencing high levels of success in their personal lives and professional careers.

Disclaimer: We have  been a big-time fan of Tony O’Keeffe for a very long time. We have also rubbed elbows with a ton of people who have either attended RMCC or worked at the college. I put him in the same category that all those Ex Cadets from the 1960s & early 70s placed the late legendary Major Danny McLeod.

In the humble opinion of this writer, Tony O’Keeffe is right up there with Chris Hadfield as an inspiration to the up and coming generation of leadership not only in the Canadian Armed Forces but in Canada and beyond.

K-Town Triathlon and the RMCC connection.

We wrote at length above, on the participation of Tony O’Keeffe at the most recent K-Town Triathlon. Undoubtedly, there are others. With the assistance of Mr. ‘Kommy’ Farahani of the Chemistry Department, known at the college simply as Kommy, we are aware of at least two more. Professor Sarah Creber (Chem.Chem.Eng.) and NCdt 26850 (II) William Kelsey. e-Veritas readers may recall an article penned by William this past May, Remembering Afghanistan.

Kommy was out and about all day with his camera and provided us with the following: 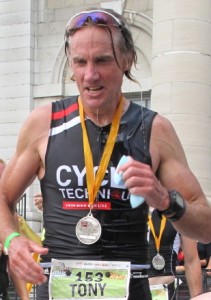 We are sorry if we missed anyone else from the RMCC community who participated in the 2014 K-Town Triathlon.