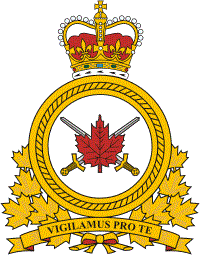 The goal of this week’s Personal Military Training (PMT) was to develop a stronger understanding of the Royal Canadian Air Force and the Canadian Army. Captain Gatehouse delivered a presentation about the army which featured discussion on the roles and career paths of a junior officer both in the combat arms and in other trades. He supplemented this with stories of his own experiences at home and abroad which was particularly appreciated.

Captain Weaver provided insight into the operations of the RCAF. Many were surprised to learn about some of the lesser-known activities of some flying units. Neither presentation targeted any specific group and both served as broad, informative overviews for those of us who might not have otherwise been able to compare of the different elements.

As a future junior air force officer myself, I left the lecture feeling more conscious of the environment in which my army colleagues will work and I am sure they appreciate that the RCAF is far, far more than just hotels and coffee!